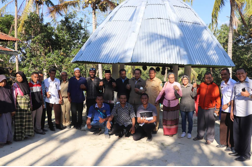 In July this year, in Oe Ue, a remote village in East Amanuban Sub-district of South Central Timor, 19 Christians, many of them children, recited syahadat. This is the basic confession by which one becomes a Muslim: “There is no god but Allah, and Mohamed is His Prophet.”.A video of the event was posted on social media and news of the conversions went viral. The reaction of Christians, members of GMIT and beyond, was swift and appears to be gaining momentum. Thousands of rupiah have poured in to build houses, provide scholarships for young children, and drill deep wells in this area that is prone to seasonal drought.

I have not joined any teams that have descended on Oe Ue in the past several months— indeed, there is a feel of "circus" to it all—but as support staff to GMIT's Synod Unit on Natural and Humanitarian Disaster Response I have participated in several meetings and along with a few others try to challenge a discourse that would insist that the presence of Muslims in an area widely perceived as a GMIT stronghold is a “spiritual disaster” that requires an emergency response. At a recent meeting the decision was made to name the GMIT-initiated response the “Humanitarian Team for East Amanuban,” sidestepping the “spiritual disaster” language that has captured the hearts—and pocketbooks—of many. Questions also need to be raised regarding the long-term impact of short-term interventions; e.g.: What might be the long-term ecological impact of drilling deep wells? How can GMIT provide similar attention to hundreds of other congregations that face ecological and economic hardship, for whose daily struggle has not gone viral on social media?

A jumble of issues emerges as GMIT leadership seeks to respond to this event with judicious care. This “event” highlights fault lines in GMIT between city and rural congregations, the cash rich and cash poor, and theological evangelicals and progressives; and internal tensions are not easy to negotiate. Some would take an approach that embraces all in Oe Ue, Christians and Muslims alike, to ensure dignity for the local villagers, and support for inter-religious cooperation and harmony. Others in GMIT and Christians of other Indonesian denominations take a more aggressive, albeit efficient, approach whose unspoken agenda is to prevent “defections” of Christians to Islam.

Reasons for the conversions vary. When a Muslim woman married into Christianity in this area many years ago, the families agreed that one of her children would be raised as a Muslim. Others allowed their children to convert as a prerequisite to free education in Muslim schools, beginning with acceptance at a local pesantren (Islamic boarding school). The timing of sudden attention by middle-class, urban Christians in faraway Kupang to East Amanuban, falling as it does on the heels of a short video, suggests mixed motives. The charity and contributions to development by Christians seem to be driven by a desire to offer local villagers viable “Christian” alternatives to assistance they have received from Muslims, thus casting this help to the poor as a competition for hearts, minds, and souls. The motivation hearkens back to the “rice Christians” of colonial-era proselytizing among the poor, an enterprise that Muslims too have replicated, using free education as “bait”. But Christians may also be responding from a measure of guilt for past neglect. Comfortable urbanites visiting Oe Ue are reminded of the harsh conditions of rural communities in Timor. This wake-up call regarding economic disparities within GMIT may help city churches develop a greater engagement with their village brothers and sisters.

I remember when in high school I first learned “They'll Know We Are Christians By Our Love,” with its catchy melody. As much as I liked the tune, the hymn never sat well with me because even then I knew that Christians were not the only humans to love, a lesson that has deepened over the years as I have worked closely with Indonesians of many different religious, cultural, and political identities. The same insight was evident in a process of interfaith dialogue in Indonesia several years ago called “A Common Word” in which Indonesian Muslim and Christian theologians explored the role of love in one another’s faith traditions. If there can be ecumenical and interfaith acknowledgment of the importance of love in our theology, perhaps the next challenge is to realize such love in ecumenical and interfaith community service development. That is the challenge GMIT now faces. Please join GMIT in prayer as it seeks the way of Jesus Christ in the midst of poverty and hope among neighbors of all faiths.