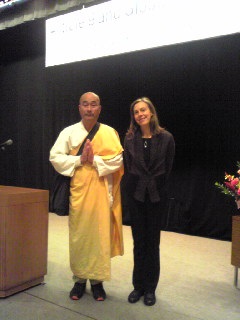 Japan’s peace constitution is in danger! The Abe administration has been making steps toward revising Article 9 of its constitution – the article that stipulates that Japan revokes military force.

The recent hostage crisis – the assassination by ISIS of two Japanese citizens, including journalist Kenji Goto – has given Abe even stronger resolve to change the constitution, allowing Japan to more actively join in the “war on terror.”

Japan used to be respected and trusted in the Middle East because it was known as a country that contributed in peaceful ways to the development of countries in that region. Unfortunately, recent activities on the part of Japanese government have changed this image. Japan now is another enemy nation, along with the United States, and many European nations.

However, to many of us in Japan, the need for an alternative peaceful approach than “fighting terrorism” by force seems all the more clear now and so we are very concerned about the road that the Abe administration is taking.  Global Ministries continues to support the work of the church to be a voice of peace in Japan – to advocate for Japan’s Article 9 of the “Peace Constitution.” 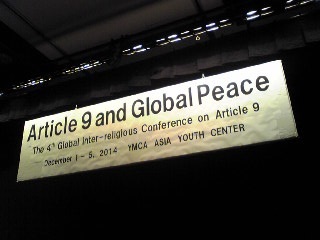 Last December, the National Christian Council of Japan sponsored the “4th Global Inter-religious Conference on Article 9.” 120 participants from 15 countries, including many leaders of Christian, Buddhist and Muslim organizations, gathered in Tokyo to discuss ways to promote Article 9. Jim Moos and Xiaoling Zhu attended the conference, representing Global Ministries, and I participated as an interpreter.

Speakers from Japan, Korea, Malaysia and Norway gave outstanding lectures and presentations. The conference ended with a proclamation and an action plan on ways that our various organizations can advocate for the preservation and promotion of Article 9.

For me, the most eye-opening experience was hearing from Takeda Shonin, a Buddhist priest of the Nichirenshu Nipponzan Myohoji. This Buddhist sect is known for its strong stance on peace, including the protection of Article 9. They are active in the peace movement, often doing peace marches to raise public awareness and convey the message to the government that Article 9 needs to be preserved. Many of these peace demonstrations happen in front of the Prime Minister’s official residence or other central locations in Tokyo. I was shocked to hear from Takeda Shonin that in recent years, the police and guards at these various sites prevent him from approaching these places. He is on their “black list” and when they see him coming they physically block his approach!  For peace activists, especially in Tokyo, this is a well-known reality – that democracy is at risk in Japan. But Takeda Shonin continues to be an active voice of peace, even though he is prevented access to these central places.

I met Takeda Shonin at the first interfaith conference 8 years ago. I have been deeply touched by this peaceful Buddhist priest and his gentle ways. From the perspective of peace, the situation in Japan is bleak, but as people of faith we are called to carry on, to spread the message, and do what we can to promote a vision of peace and non-violence.

Please remember the interfaith work to protect the peace constitution in Japan and join us in our common prayer for peace and non-violence.

Martha serves at Doshisha University, Kyoto, Japan through the Council on Cooperative Mission.  Martha is a Teacher of social welfare. Her appointment is made possible by your gifts to Disciples Mission Fund, Our Churches Wider Mission, and your special gifts.