On June 15th and 16th, we participated at the Fourth Encounter of Women Activists and Human Rights Defenders of Oaxaca in the capital city of the state, where about 70 women from different regions of the state of Oaxaca, as well as representatives of international support organizations and a representative of the European Union in Mexico were present.

The meeting aimed at strengthening the defense of the human rights of the various feminist, civil and social movements as well as strengthening alliances between the different struggles of women. The majority of the participants are currently involved in a variety of struggles, ranging from the defense of their land and/or water resources against for example mining projects, the protection of migrants, movements against high electricity charges or the juridical help for political prisoners and those unjustly imprisoned. All of these women, who are working for a positive social change, are constantly putting their life in jeopardy for the defense of women's and human's rights as they are subjected to intimidation, assault, torture and recently more and more to murder.

According to the Mesoamerican Women Defenders Initiative, the context in the state of Oaxaca is “adverse and dangerous for the defense of human rights where attacks have risen alarmingly, where impunity and the acquiescence of the state are a pattern.” In 2012, for example, the Oaxaca Consortium for the Parliamentary Dialogue and Equality registered a total of 48 attacks against defenders in Oaxaca, while in 2016, that number rose to 320. The attacks are of different types: assaults, harassment, threats, slander, defamation and feminicides. For example, Bettina Cruz Velázquez, one of the participants, told how she was unfairly imprisoned for defending the Juchitecos indigenous rights who have not been consulted about an wind power project in their territory. She was charged with taking part in an event against this project, whereas she was not there. Although, Bettina was release from prison, nowadays, she is still a victim of physical aggression, monitoring and defamation.

As Sipaz, we participated in the meeting by giving a presentation (see photo 2.) about our work and the different kind of support and protection mechanism we offer to women's and human's rights defenders.

Attached are some pictures of the encounter. We know your donations made possible our participation at the encounter and the support we can bring to these women. If it wasn’t for faithful supporters like you, we wouldn’t exist. So thank you for supplying the funds that we need to make a difference in the lives these human's rights defenders. For that we sincerely would like to thank you. 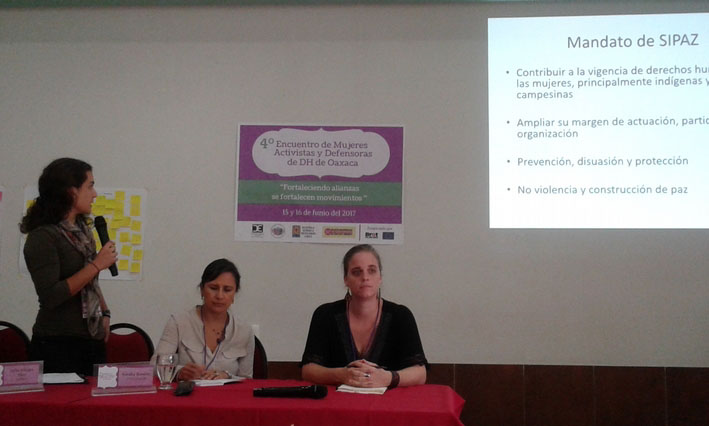 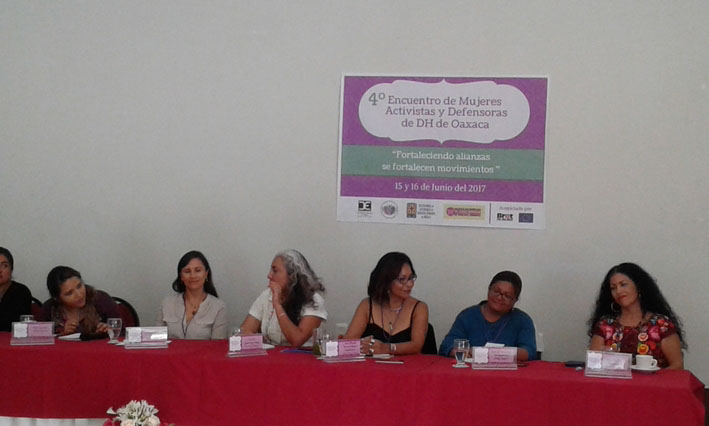