Skyscrapers, Churches, and the Future 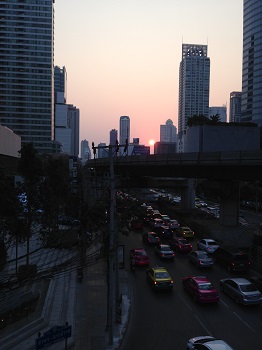 Bangkok is among the top 15 skyscraper cities in the world now, ever since the technology has been available to build tall buildings in a swamp.  When I left here so many years ago, there were only two buildings taller than five or six stories.  Now there are dozens.  One of the tallest in Bangkok, the Empire Tower, is about a block from the house where I’m living.  So trees and grass are at a premium.

I never thought I’d be grateful to have no car to drive, but here, traffic is jammed just about 24/7.  Saturday and Sunday mornings are a wee bit more navigable, but that’s it.

So, every weekday morning I find myself walking 10-15 minutes to catch the sky train (including climbing up and down 100 stair steps), riding for 15 minutes or so, and walking another 10-15 minutes to the office.  A car or taxi would take at least a half-hour longer.  The commute is warm work for a person who has lived through many Midwest winters in the USA.

On Sunday mornings I can walk to the Christian school where the International Church of Bangkok has its morning service.  This 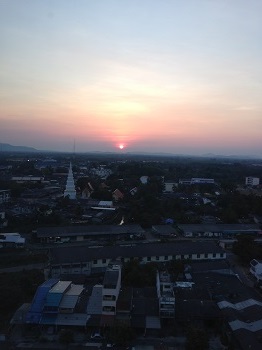 is the congregation of my childhood—multi-ethnic, multi-denominational, and multi-lingual.  What’s new to me is that there are church members who have fled from religious and political turmoil, and sometimes torture, in places such as Africa, Asia and the Middle East (naming the actual countries might possibly create even more trouble for some of the folks).

But that isn’t the only place of worship I’ve attended.  I’ve been part of the choir in an ecumenical service at Our Lady of Fatima Catholic Church in Bangkok; I’ve attended the Saphan Lueang Church, where I could hear the sermon being given in Thai and Swatow Chinese, and simultaneously translated into English through earbuds.  I’ve attended the Maitrichit Chinese Baptist Church (the oldest Protestant Church in Southeast Asia), where there are still many old friends of my parents, Bethel Mandarin Chinese Baptist Church, where my father was once pastor, the Fourth Thai Church, also known as Suep Sampantawong—the very first church building I ever remember being in (and also within walking distance of my house), and the Community Church, which my father was instrumental in founding back in 1966.  I was the first pianist for that congregation, at the tender age of 10.

Yes.  There are a few churches I can actually walk to, which might lead you to think that Christianity is more common in Thailand than it actually is.  Among the 10 member countries of ASEAN (Association of South East Asian Nations), Thailand is in last place, with Christians making up less than 1% of the population.

Here are the numbers:

You know what this means, don’t you?  We need prayer and we need support! 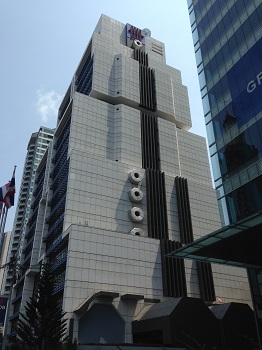 There is much discussion among Thai Christians as to why Thailand seems to have been less receptive to Christianity.  Some say that it has been presented too much as a choice to be “Western,” and therefore to be seen as rejecting one’s own history, culture, and even family.  In that light, some evangelists argue that karma might be a better translation than sin to describe the separation from God that is the root of human pain.  Rather than doing good deeds in order to make merit, we do them out of our joy in being saved from karma by the sacrifice and resurrection of Jesus.  In every culture, the way the Gospel is translated can be argued.

Another factor, and it may well be a delicate one, is that Thailand was never colonized by any Western power.  This differentiates its history from that of every single other ASEAN nation.  Again, Christians may argue that our faith is not a Western faith, but one can see that when cultures interact around the world, the result is a greater variety in faith, ideas, and languages.

Speaking of languages, Thailand ranks quite low in English proficiency in several studies of Asian countries.  This is an urgent need.  ASEAN has chosen English as the common language for the ten countries, and Thailand, being geographically central to them all, is going to have to ramp up the use of English everywhere, or risk losing jobs to better English speakers from the Philippines, Singapore, Malaysia, Brunei, even Myanmar or Laos.  Why the possible job loss?  Because in the near future, any ASEAN citizen can choose to live or work anywhere in the ASEAN group of countries.  Nearly every friend and acquaintance I’ve met has asked me to help them learn English.  This is as true today as it was when my parents’ generation of missionaries and other ex-patriots was living and working here.

For me, this is a wonderful time of speaking and learning Thai, seeing and feeling and tasting and remembering a place I knew so many years ago, and meeting new and old friends.  In spite of the difficulties, I meet many more Christians than I did long ago, I notice more English comprehension that I did years ago, and I see people working hard and experiencing big-city stress much like any big city in the world.  God’s Spirit is at work here, just like in your town or your city.  And the faith and faithfulness I see among my brothers and sisters in Christ makes me thankful.