Solidarity with the Caribbean Region After Disasters 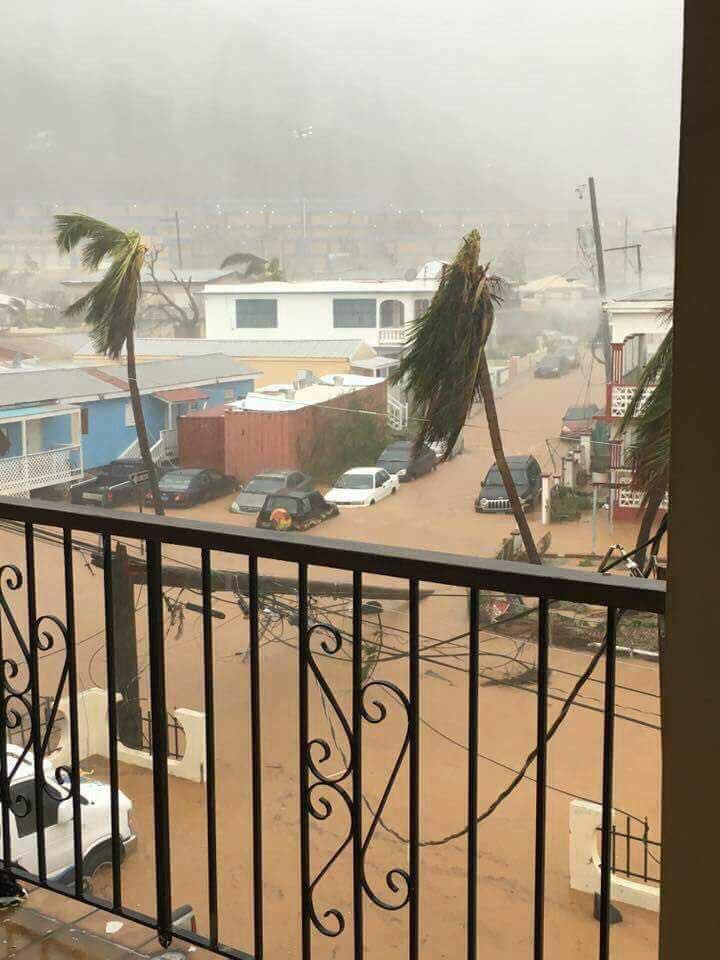 Two earthquakes and two hurricanes marked the history of the Caribbean with destruction and despair in the past few weeks. Many of our partners have suffered the devastating effects of these natural phenomena, piling up on top of the permanent social, economic, political, and emotional challenges of everyday life on these lands of sun and blue skies.

A recent word from the leadership of the Christian Church (Disciples of Christ) in the U.S. and Canada expressed that "we have been praying fervently for those whose lives have been disrupted, for those who have lost loved ones in the storms or earthquakes, and for those who now face great uncertainty in the aftermath of these disastrous events." Although the loss of electrical power and cell phone service has made communication difficult, we want to affirm our commitment to stand with those in Puerto Rico, Mexico, Cuba and the Caribbean with support, resources, and prayers.

Part of our efforts within the Caribbean Initiative will includes solidarity with our partners and the people in Puerto Rico, Cuba, Dominican Republic, Haiti, and Mexico. It is important for our churches in the United States and Canada to share this information and to keep our friends in prayer.

Here is an update of the events in the Caribbean and our call to solidarity in the midst of the wreckage and the efforts of recovery and reconstruction.

The storm first slammed the coast near Yabucoa, a town in the Southeastern part of the Island, at 6:15 a.m. September 20, 2017 as a Category 4 hurricane with 155 mph winds — the first Category 4 storm to directly strike the island since 1932. At approximately 10:00 AM, Maria had fully engulfed the 100-mile-long island as winds shattered palm trees, peeled off rooftops, sent debris littering across beaches and roads, and cut electric power to nearly the entire island. In the capital of San Juan, buildings shook and glass windows shattered from the force of the storm. Residents of some high rise apartments sought refuge in bathrooms and first-floor lobbies, but even those who sought out safe ground found themselves vulnerable.

3.4 million Puerto Ricans remain almost entirely without electrical power — but it is not because their power plants are down. The problem is that roughly 80 percent of transmission lines, which take power from the plants to distribution centers, are down. Nearly all the local power lines that run to residences and businesses have also been destroyed. The hurricane has left the island completely crippled and without power as residents struggle to pick up the pieces. The majority of homes, roads, and vegetation across the island have been either severely damaged or destroyed, creating a potential humanitarian crisis. Regarding our partner, the Christian Church (Disciples of Christ) in Puerto Rico (ICDCPR), at least four churches (Sonadora, Monte Verde, La Grama and Amelia) were destroyed as a direct consequence of Hurricane Maria. In one of them, its pastor lost his entire personal and church library. In two churches, a river went through their facilities, causing flooding inside them. The Barrio Nuevo church suffered serious damage to their stained glass windows and its roof is leaking. Morton Retreat Center lost its pine trees and the winds severely damaged its water tank.

Rev. Miguel A. Morales-Castro, General Pastor of the ICDCPR, has contacted 70 pastors around the island to identify the needs of the people and congregations as well as collaborating in the efforts of pastoral accompaniment, recovery, and reconstruction.  Reverend Morales shared with us the different ways ICDCPR is dealing with the challenges related to the devastation of Hurricane María. With its own finances, they have been providing economic assistance to people who have lost everything and do not anticipate federal assistance. They are also buying medicines, non-perishable food, home repair supplies, and fuel, as well as other items. In addition, they are providing direct attention to refugees and victims, especially to those that took shelter in church facilities.

Regarding the United Evangelical Church of Puerto Rico (IEUPR), the Reverend Edward Rivera-Santiago, its General Pastor, reported that he has visited IEUPR congregations and members through the West and the Northeast part of the island. Church structures of the congregations in El Duque, Punta Santiago, and Las Piedras have been severely damaged by the hurricane and IEUPR's General Offices suffered window damage and flooding inside the building. They are in the process of getting fuel.

The Cuban Council of Churches sent us the following descriptions of their crisis with Hurricane Irma:

As of September 6, 2017, Hurricane Irma, a category 5 hurricane, with maximum sustained winds of 295 km/hour, strengthened significantly to become one of the most powerful hurricanes ever recorded in the Atlantic. After wreaking havoc in the Eastern Caribbean, Irma approached the eastern coast of Cuba in Guantánamo on Thursday, September 7 2017, making landfall on September 8 in Cayo Romano, north of Camagüey. Irma battered the entire north coast for 4 days. At 8:00 p.m. on Monday, September 11, the hurricane finally left Cuban territory leaving huge devastation and heading towards Florida as a Category 3 hurricane. Approximately 2 million people were evacuated to the homes of relatives or neighbors, emergency shelters, and local churches. The hurricane and storm surge, with waves of up to 9 meters, caused considerable environmental, economic, and social damage to the entire country: 10 deaths have been reported; there is an inadequate supply of safe water for human consumption; a significant loss of coastal dunes, forests, fruit trees, as well as seed granaries, banana and other crops; total or partial destruction of houses, health and educational centers, markets, bridges, and access roads to communities. Widespread flooding promoted unsanitary conditions, which have resulted in health issues. Many communities remain without electricity and telecommunications, due to extensive infrastructure damage. The tourism industry, the main source of income for the Cuban economy, has been severely impacted, due to the destruction of hotels. All this has severely affected the well being of vulnerable groups, especially elderly people, children, youth, women, people with disabilities, and individuals with chronic illnesses.

The Cuban Council of Churches and other Global Ministries partners, the Martin Luther King Jr. Memorial Centre and the Evangelical Seminary of Theology, are contributing to the recovery of affected households in 20 municipalities of 10 provinces that were affected by Hurricane Irma. They are providing emergency relief assistance and helping with the strengthening of community resilience. Six outcomes are proposed: a safe rehabilitation of roofs; access to non-food items for the reestablishment of daily life activities; access to food and food security through productive activities; access to hygiene kits and awareness about proper hygiene practices and water sanitation; rebuilding of social networks and communal resilience; and psycho-social and emotional support.

The Dominican Evangelical Church reported severe damage to crops and houses. Santo Domingo, the capital city, has been affected mostly by rain. The provinces that registered the most damage are Samaná, Nagua, Puerto Plata, and Monte Cristi. The Social Services of Dominican Churches (SSID) shared that their regional coordinators have been working alongside their emergency response committees in their provinces to educate people about safety measures and the risks from Hurricane Irma. Food security, water, and sanitation have been identified as priority needs, as well as water quality treatment as a key concern in recovery to combat water-borne diseases. Livelihoods in affected communities are anticipated to be an area of need when recovery efforts begin. As a direct result of the hurricane, the following humanitarian needs are to expected: food security, WASH (water, sanitation, and hygiene), shelter and non-food items, early recovery, livelihoods, and health services. Mobilization of needs assessments is also a challenge especially in the mountainous regions. From the church's general offices they continue monitoring the situation and assess the damage across the island.

Up to this moment, we do not have direct information from our partners regarding the effects of Hurricane Irma on Haiti, but sister organizations in the country reported that a river in Ganthier, Haiti has burst its banks, flooding nearby farmland. Ganthier is a commune in the Croix-des-Bouquets Arrondissement, in the Ouest department of Haiti. It has 71,261 inhabitants. We continue our communication efforts with our partners there to assess the effects of the damage.

Initial reports from the Mexican Seismological authority said the earthquake struck at 07:53 am local time on September 7, 2017, at a depth of 10 kilometers with an epicenter approximately 12 km north of the City of Ixtepec. This is around 530 km south of Mexico City. This first earthquake destroyed homes and buildings across the southern states of Oaxaca and Chiapas and claimed the lives of 96 people. The earthquake damaged an estimated 80 percent of the homes in Juchitan, a municipality adjacent to Ciudad Ixtepec, according to the Oaxaca state government.

INESIN and Global Ministries Mission Co-worker, Elena Huegel, visited the towns of Ixtepec and Ixtaltepec, State of Oaxaca. Through contacts that the Institute had in the area, they spent 2 hours with 63 pastors and leaders of the Church of the Nazarene teaching briefly about emotional first aid, compassion fatigue, and the dangers of untreated trauma and then inviting them to begin to envision the new ways that they will be involved in God's mission over the coming months and years. They asked them to continue with emotional first aid and resilience development, and to begin the process of training Roots in the Ruins facilitators over the course of the next two years. The Institute will begin the process of securing funds to be able to accompany this group as an encouraging example of resilience. They had the capacity to organize, even in the midst of chaos, bringing together people who represented the broad spectrum of lay and pastoral leadership in the church with youth, middle aged, and older men and women with many different capacities and professions, from medical doctors and psychologists, to teachers, students, and stay-at-home women.

There are 44 collapsed buildings in Mexico City and 225 dead in the three affected states. The Theological Community of Mexico (CTdM), a longstanding Global Ministries partner has joined efforts to support victims.

Two of the CTdM, teachers, Professors Hugo Gallardo Duarte and Ezra Viveros and their families, have lost their homes. At this moment they are waiting for Public Security authorization to recover their belongings and begin the search for a new home. Hugo Gallardo is a Presbyterian pastor and Coordinator of the Latin American Faculty of Reformed Theology (FLATER), and Ezra Viveros is a minister of the Church of God of the Seventh Day.

In the following days, professional supervision will be carried out at the Community with the aim of knowing the structural conditions of the buildings and the possible risks.

Our word and deed of solidarity with the Caribbean

Most federal agencies and non-governmental organizations agree that the best way to be in solidarity with the people in the Caribbean is through financial donations. Bob Ottenhoff, president and CEO of the Center for Disaster Philanthropy, has some words of caution for those who want to help, "This is not the time to be donating products or even services," he says. "That's frequently the urge, and most often that is the wrong thing to do...With the floods blocking off streets, when warehouses are not available, there's no place for these products — there's no place to store anything, there's no place to distribute anything. And that's going to be the case for some time." Instead, he says, people should give money to groups they trust, and that have the ability to provide aid where it's needed most.