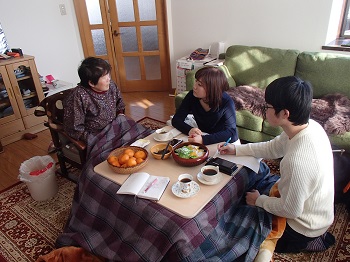 These words give me a framework for God’s mission and how I want to live out God’s love for this world. If only we would stop building walls and dividing people. If only we could discover ways to cherish our common humanity, or to appreciate the inter-connectedness of all living things. Our calling is clearer than ever; to reach out and connect, and to celebrate in doing so.

In March my friends and former colleagues in northeastern Japan will be gathering for a memorial service. It will mark the sixth anniversary since the great triple disaster of earthquake, tsunami and nuclear plant explosion. It is no coincidence that three national staff (Rev. Xiaoling Zhu from the East Asian Office, Mr. Zach Wolgemuth from UCC Disaster Ministries and Mr. Vy Nguyen from the Disciple’s Week of Compassion) will be attending the memorial service. Global Ministries has walked alongside our partners (the Kyodan) from the very beginning, sharing in the struggles and the blessings of God’s mission. We have reaffirmed our connections as brothers and sisters in Christ, and have worked together to be a part of God’s love for this world. 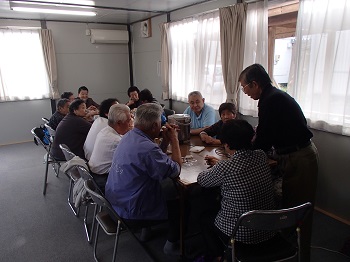 This particular memorial service will be special. The national office of the Kyodan has determined to close the ministry of the Emmaus Disaster Relief Center. My good friend the Rev. Masashi Sato, who has served as director of the Disaster Relief Center, and who has hosted numerous volunteer groups (amongst whom are groups from the UCC and the Disciples, including the OGHS) will be moving on to a new pastorate in Kyushu. The local Tohoku District will need to carry on the relief ministries in a reduced capacity. The number of staff will decrease from 14 to 4. Survivors still live in temporary housing. People are still suffering and unable to move on with their lives. Many are psychologically stressed out because of the lingering doubt that remains regarding radiation levels in Fukushima. In the case of a technological disaster such as what happened in Fukushima, a ministry of accompaniment will be all the more needed as the years progress.

Recently I went to see a movie called “Silence” directed by Martin Scorsese. It is based on a novel written by a famous Japanese Christian called Shusaku Endo. Endo portrays the martyrdom that Christians faced in the 1600s in Japan. In particular he focuses on Jesuit priests from Portugal who are forced to denounce their faith by stepping on an image of Christ. The inquisitor denounces Christianity saying that Japan is a swamp where the roots of Christianity cannot take root. The main character (Padre) struggles with the meaning of the silence of God in hard times. One message I took away from the movie was the image of Christ who “suffers with” the Padre who finds himself in the midst of the contradictions of his own existence. Endo’s novel is known as one of the most theologically provocative Christian novels in post-war Japan.

One of the challenges before us in our world today is to find ways to stay connected and to suffer with and alongside one another. This ministry is a mutual one. Please know that Japanese Christians are also praying for the United States in these hard times. The memorial service on March 11 will be a time of remembrance for all those who died in the disaster, but it will also be a solemn celebration of life – of being the church, together.