“For the eyes of the LORD range throughout the earth to strengthen those
whose hearts are fully committed to him.”  (2 Chronicles 16:9)

The celebration of Easter often brings with it a desire for a greater commitment to the Christian faith.  The power of God that raised Jesus from the dead is not a power restricted to the past but is a power for the present that does indeed “strengthen those whose hearts are fully committed to him.”  That resurrection power is present here and now for those whose hearts and minds are open to receiving Christ as their Savior.

God’s power is revealed to us in many ways, including the powerful testimony of His love as shown in the beauty of the creation.  Here in the southern hemisphere Easter comes towards the end of the growing season.  And yet, it is in March and April when the glory of the blooming cosmos flowers is revealed.  In some areas you find fields carpeted with them and you catch your breath when seeing them after coming around a bend in the road.  While not native to Lesotho, they are common in parts of the lowlands and foothills of the country. 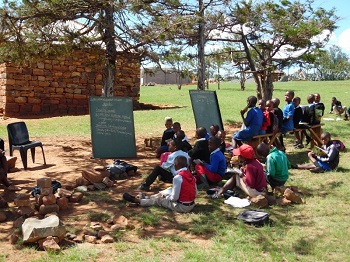 The Qiloane Primary School classroom construction project has made good progress.  The building is now roofed and we hope that it will be ready for use by the end of April.  What remains now is mostly interior work to finish the floors, ceiling work, painting and installing the window panes.  There will be five new classrooms, each of which can accommodate about 24 students.  The school’s three staff members, as well as community members, are thrilled to see that their dream is nearing completion.  The LORD is strengthening 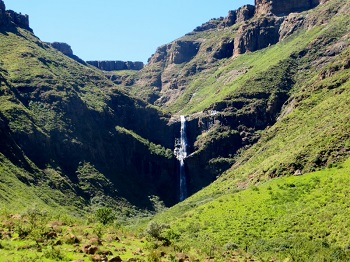 Meanwhile, most classes are still held outdoors.  On days of inclement weather the 115 students crowd into the old stone church.  As part of the project the church’s dirt floor is being replaced with a cement floor and chalkboards will be installed so that the building can house two of the seven grades that make up primary school.  I’m sure the students are wondering which grades will get to be in the new building, but we are leaving that decision up to the staff!

The distance of the school from Morija is about 45 miles.  After leaving the tarred road you pass through some majestic scenery, including the fields of cosmos above.  One visitor commented that the area was worthy of being a national park!  A recent

3-hour hike in the area brought me close to Ribaneng Falls.  The trail leading to the falls runs through a beautiful valley dotted with small villages.  Since I didn’t actually get to the foot of the falls I’m looking forward (I think) to a 4-hour hike to make it all the way.

In March I welcomed Rev. Kim Henning and his wife Fay to Lesotho for a week’s visit.  Kim is pastor of Grace Congregational United Church of Christ in Two Rivers, Wisconsin.  For almost ten years now 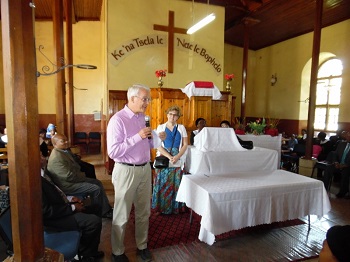 I’ve been connected with the congregation and twice I’ve been able to visit the church and share about Global Ministries’ partner church here, the Lesotho Evangelical Church in Southern Africa (LECSA), and my work with them.  During their visit Kim and Fay had the opportunity to visit Qiloane Primary School, meet the LECSA leadership, worship at Morija LECSA and attend a chapel service at Morija Theological School where they enjoyed interacting with the students.  It was a great joy to have Kim and Fay here and their visit has strengthened the bonds between their congregation and the LECSA, Global Ministries and me.

It’s been quite a while since I’ve mentioned anything about the political/security situation in Lesotho.  Things have been, and remain, mostly at a stalemate.  The regional body trying to help normalize the situation, the Southern African Development Community (SADC), did conduct an inquiry into the events of 2014 and 2015 and issued a report in February.  The report expressed concern with the actions of the military and specifically recommended the removal of the current army commander, as well as constitutional reforms.  So far none of the recommendations have been implemented by the government, much to the consternation of the political opposition.  The three main opposition leaders remain in self-imposed exile in South Africa where they fled to last June after the killing of the former army commander during a military operation.  These leaders say they will not return until the current commander is removed as recommended by SADC.

On the drought situation, Lesotho finally received good rains in mid-January.  There were also shorter periods of rain in February and March.  While the countryside looks green once again, the rains came too late for most people to plant food crops like maize and sorghum.  This was particularly true in the lowlands where the drought was most severe.  Some parts of the foothills and mountains received better rains and crops were planted.  Lesotho has so far received a minimal amount of drought assistance and is appealing for more as the harvest season is approaching when the effects of the drought will become more immediate.

Given the political and drought situations, many people in Lesotho need hearts to be strengthened to face these challenges.  When the Christians of Thessalonica were facing difficulties, Paul wrote these words to them:  “…we constantly pray for you, that our God may make you worthy of his calling, and that by his power he may bring to fruition your every desire for goodness and your every deed prompted by faith.” (2 Thessalonians 1:11).  May the power of the resurrected Christ strengthen hearts and hands to bring goodness and Good News to those in need here in Lesotho.