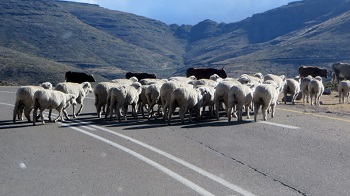 “But the land you are crossing the Jordan to take possession of is a land of mountains and valleys
that drinks rain from heaven.” (Deuteronomy 11:11)

In the Deuteronomy quote above Moses is describing the Promised Land to the Israelites but the picture he paints easily conjures up Lesotho for me.  The mountain areas of the country generally receive more rainfall than the lowlands and often glisten in the sunlight from a recent shower, snowfall or simply moisture seeping out of the ground. I always enjoy being up in the mountains and have been spending more time there thanks to the classroom construction project at Mafa Secondary School.  The scenic mountains and valleys you pass through are beautiful at any time of the year.  However, if you are the one driving, you have to be very cautious, especially around the curves, as encounters with domestic animals are almost guaranteed as the shepherds move their flocks and herds from place to place. 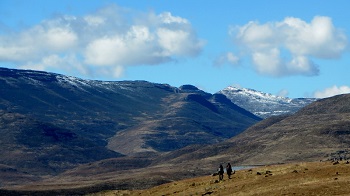 The first snow of the year fell in the mountains earlier this month.   A small amount remained to be seen if you searched hard enough among the distant peaks when I visited the Mafa project site in mid-May.  The teachers told me there had been an inch or two of snow that fell at the school before melting away.  The day of my visit it was sunny and in the 50’s at midday.  There are still several weeks of classes before the winter break comes in mid-June. 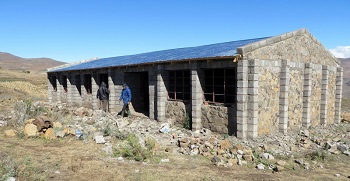 Construction progress has been slower than we had expected, but bit by bit we are getting there.  The building is now completely roofed and will be ready for the use of the students and teachers when classes open in early August for the second term.  The plastering work is nearing completion and then work on the floors will start.

The students have been helping out with collecting water to fill the water barrels for the contractor.  The plastering and floors require a lot of water so it is good that this work should be finished before the students start their winter break.  The girls in this group were a bit shy about facing the camera when pouring out the water, but very willing to strike a pose afterwards! 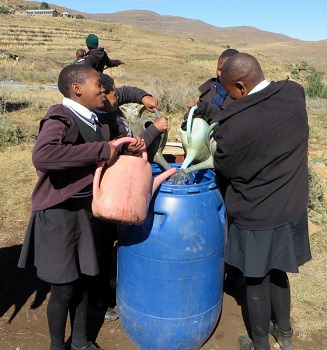 There are only 22 students at the school this year for the three grades.  But this should increase considerably next year due to changes in how the students finishing primary school are assigned to secondary schools.  The new classrooms should be able to handle the expected influx.

Mafa is situated amongst the mountains of central Lesotho.  The location is about 12 miles south of the small town of Mantsonyane.  The new classroom block is perched high above the deep gorge of the Mantsonyane River.  As I drove from Mantsonyane out to the school, many of the fields were dotted with shocks of maize.  Here and there a few patches of green were seen where winter wheat was growing.

My March newsletter mentioned that Lesotho would soon be having an 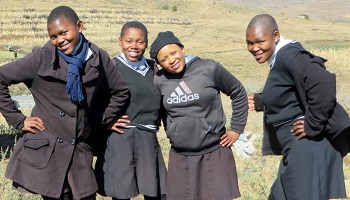 election.  The date is the 3rd of June and the political parties have been campaigning hard.  With so many parties competing, it is almost certain that there will be another coalition government composed either of the parties making up the current government or the opposition.  To strengthen their chances, the major parties have made alliances with minor ones and agreed to field a joint candidate in some constituencies to avoid splitting the vote and seeing another party win.  The churches, through the Christian Council of Lesotho, have been meeting with the party leaders in efforts to ensure that the results are accepted and to avoid escalating tensions.  Your prayers would be appreciated! 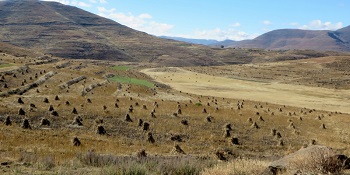 Also mentioned in the March newsletter was Lesotho’s status for participating in the African Growth and Opportunity Act.  For now, Lesotho remains eligible though its status can be reviewed at any time and not just on an annual basis as was the case in the past.  It seems likely there will be no change until at least the new government has been in power for some time and given an opportunity to address the concerns raised by the United States government.

Mountains, with their majestic profiles, automatically draw our eyes upward.  They symbolize strength, protection and stability.  The Psalmist says, “As the mountains surround Jerusalem, so the LORD surrounds his people both now and for evermore.” (125:2).  May God’s great love surround us all!