Take care of these things 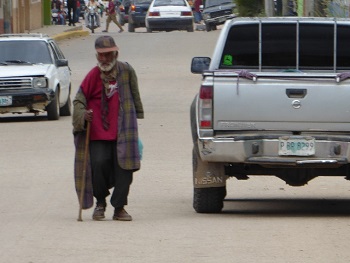 A lot of people were now becoming followers of the Lord. But some of the ones who spoke Greek started complaining about the ones who spoke Aramaic. They complained that the Greek-speaking widows were not given their share when the food supplies were handed out each day.

The twelve apostles called the whole group of followers together and said, “We should not give up preaching God's message in order to serve at tables. My friends, choose seven men who are respected and wise and filled with God's Spirit. We will put them in charge of these things. We can spend our time praying and serving God by preaching.” Acts 6: 1-4

There is an old man that walks past my house every day. It is difficult to judge ages in Honduras. This man could be anywhere from fifty-five to eight-five. He is dressed in layers of ill-fitting clothing, even though the temperatures hover in the 90’s. Rather than walk, he shuffles along using a stick as a cane. He carries a large, plastic bag in which he collects plastic recyclables. Plastic seems to be his specialty. He passes by glass and cardboard. I see him stopping to dig in my garbage to look for plastic, so I started separating for him before I set out the trash. I saw him asleep on the sidewalk early this morning. It was likely he slept there all night. Sometimes I stop to chat with him but he does not make eye contact nor does he seem interested in chatting. He is intent on his work.

Seeing this man everyday makes me think my own Golden Years, which are soon upon me. Will I be gathering plastic recyclables? Probably. Will it be my sole source of income? Probably not. Will I have a cane or walker? Enough food? A place to sleep? Even if I am “poor,” it is likely I will have all those things.

What is the difference between myself and this man? I was born in the United States and he was born in Honduras. Franklin Delano Roosevelt signed the Social Security Act in 1935 and severe poverty in the elderly was almost completely eliminated. In the past seven years, living and working in developing nations, I have thought about this inequity a lot.

Don and I have worked in CEVER, a vocational training school in Yoro, Yoro, Honduras for the past three years. Our role has been in assisting CEVER to support the teachers and the administrative leaders to establish a more sustainable model of education. They believe in the mission of youth development, employment training and entrepreneurship to build a better Honduras and our work as missionaries has consisted of affirming that vision and using our gifts and talents to do so. In addition to feeling a Christian call to work in world mission, we understand that improving the economic situation of all God’s creatures is not only a Christian mission, it is a selfish mission. Don and I like to say, we all do better when we all do better. We feel that education and developing marketable skills is the key to a better world. Build bridges to the world and we will all be enriched.

The apostles appointed seven representatives to “take care of these things” so the others can be free to pray and preach. That doesn’t seem like very many people to feed the Greek speaking widows while the others got the cushy job of sitting around praying. But I think good works were expected to expand from those seven. Our term has ended now and Don and I will return to the United States to enjoy regular water and electricity, interstate highways and flushing toilet paper in the stool. And yes, we will collect social security and sign up for Medicare. But as we look back on our time spent with God’s people, I’m glad we were included in the seven spirit-filled, wise people chosen to take care of these things.

Don and Maryjane Westra serve in Honduras assigned to the Christian Commission for Development (CCD). Their appointment is made possible by your gifts to Disciples Mission Fund, Our Church’s Wider Mission, and your special gifts.