Tell our Leaders Not to Move the U.S. Embassy in Israel 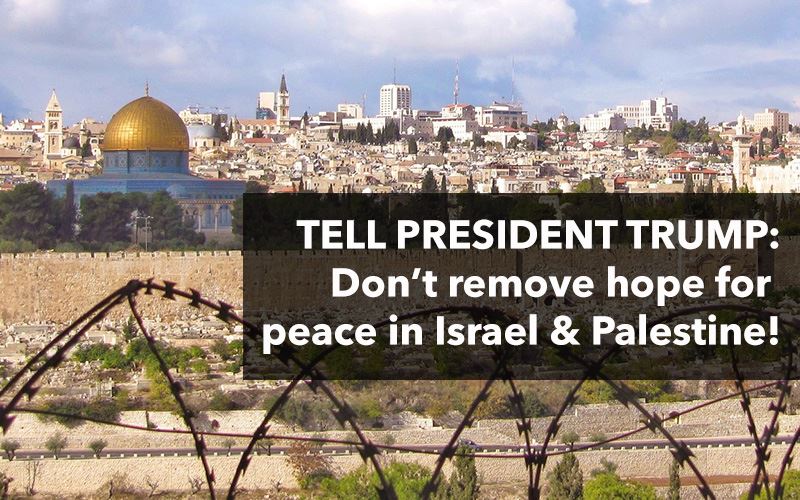 President Trump has announced his decision to recognize Jerusalem as the capital of Israel and to move the U.S. Embassy to Jerusalem. This decision is reckless and will not help advance the goal of a just peace between Israel and Palestine.

The General Synod of the United Church of Christ and General Assembly of the Christian Church (Disciples of Christ) has long advocated for a shared Jerusalem as a "sign of peace and a symbol of reconciliation for all humankind" that is open to people of the three faiths for whom the city is so important, Jews, Christians and Muslims. Jerusalem has been long considered a ‘final status’ issue in peace negotiations and is a critical part of a comprehensive and balanced two-state peace agreement.

Although it is expected that the President will sign the waiver to keep the U.S. embassy temporarily in Tel Aviv (as his been the practice since 1995), this decision today signals that plans are in place for a day when the move will take place. Previous Presidents have resisted similar calls to move the embassy, recognizing that Jerusalem’s status should be determined by the parties as part of a negotiated peace.

Over the past twenty-four hours, leaders from across Europe and the Middle East have joined U.S. foreign policy experts and NGOs in rebuking the President for this change of policy that has been in place for nearly seventy years. Thirteen Patriarchs and Heads of Churches in Jerusalem have also issued a letter that suggests any change to the status of Jerusalem would result in “irreparable harm” to the cause of greater unity and peace. People around the world understand clearly that this decision will ultimately result in further instability and insecurity in the region and will significantly undermine the U.S. role in the peace process going forward.

Take action today to tell President Trump not to recognize Jerusalem as the capital of Israel and not to move the U.S. Embassy to Jerusalem. These actions will result in a step backward in an already fragile peace process and further diminish hopes for a just peace between Palestinians and Israelis.

General Synod and General Assembly Statements on Palestine and Israel