The Beginning of my time in Thailand 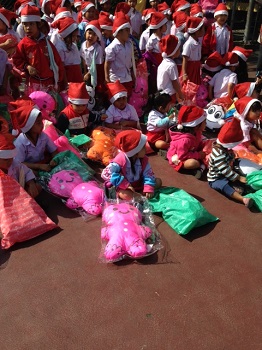 My first two work days have been a blast.

I got to work by 7 a.m. on Thursday (my first day).  Yes, I slept for one day, and then went to the office.  It was necessary so that I could meet everyone before Christmas.  My housemate and boss, the Rev. Dr. Sharon Bryant, and I took a cab.  Usually she takes the elevated train, but she had Christmas presents to take.

There was a worship service first thing and it went on extra-long because the outgoing officers of the CCT (Church of Christ in Thailand headquarters) were saying goodbye.  I actually understood much of the sermon and could sing some of the words to the hymns.  The responsive readings were much too fast for me to keep up with. 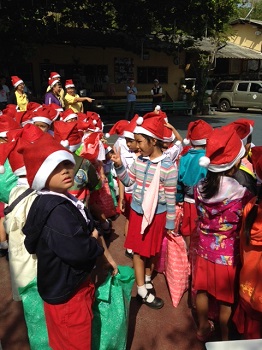 Then I went around the whole building with the staff of my particular branch, giving away small Christmas presents and singing "We Wish You a Merry Christmas" in Thai.  We had our picture taken - by cell phone, of course - with every group of recipients.  It was great fun!

Then there was a free lunch for the entire CCT staff - about 90 people - provided by Acharn Sayam (pronounced ah-tján sy-áhm), the General Secretary—whom I had I met at General Assembly in Orlando.  He was really welcoming and he's clearly well-loved here.  Acharn Sayam is one of the departing officers, so he'll be gone in a few days and moving back to Chiang Mai, where he's from. Oh, and the lunch was Kuay Tieaw Ratna - on the menu of most Thai restaurants in the US.  Stir-fried rice noodles with greens and cauliflower toppings, along with a gravy full of black mushrooms and pork, as well as cold boiled fish, mussels, shrimp, squid, and octopus on the side.  I tried it all.  Not a pepper to be seen, except what you could add yourself.  The dessert was green guava slices—SOUR (did I say SOUR?)—with chili pepper dip. I skipped the dip and just added sugar.  Also there were two colors of watermelon slices and tangerines with the leaves still on, for looks.

After that I started to fade, so Sharon got one of the staffers to drive me home.  Turned out to be a long drive, but I saw some interesting neighborhoods. Luxury and poverty are side-by-side here, as they were when I was a child.

My second day was even less a workday.  I started out practicing a Vivaldi duet that Sharon and I are being asked to sing at the worship service on January 5.  Yes, you read that right.  Then I was asked to preach in English at the staff Christmas Eve service, as well as to accompany the hymns.  They DO have guitars around, so I may do that instead of the piano. 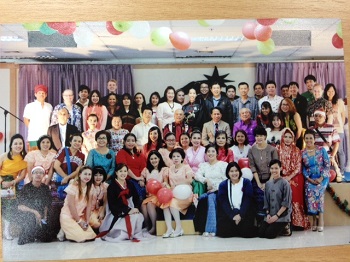 Then there was another free lunch for about 200 people.  This time it included all of the students who live in the dorms on this campus, the teachers of the Union Language School (where I expect to be a student soon), and whoever else is around here.  They had drawings for some amazing Christmas gifts.  One student got a microwave and his roommate got a nice suitcase.

After lunch there was a worship service for the CCT staff, so it was a smaller group.  I understood less of the sermon this time - maybe because I was fading.

Then there was a contest for the best costume.  Did I mention that all of the staffers were asked to show up wearing ASEAN-themed outfits (that is, the Association of Southeast Asian Nations)?  My boss wore a traditional Chinese dress.  Some people really did it up.  One of the staff drivers, who is apparently a popular guy, showed up dressed like a traditional Burmese man with a checked skirt-like cloth, very much like the ones I had in my traveling display, a white cotton shirt, and a scarf wrapped around his head in the traditional way.  In the secret ballot vote, he came in second.  Yes, there were prizes for 4th, 3rd, 2nd, and 1st place.  The winner, whom I would have voted for had I known her name or how to spell it, was dressed in this amazing crimson outfit covered in golden crystals.  I was told it was a traditional dress from Brunei.  It looked sort of like a sari with an all-covering head scarf/shawl.  Beautiful!  And when I get my phone service in order, I can start to take pictures.

After this celebration I got to go home because I'm still dealing with jet lag.  But my boss and a number of other staffers went out on the traditional all-night Christmas caroling extravaganza.  More about that soon.

Today is Christmas Eve and I preached at the morning worship service (which they have every Monday, Wednesday, and Friday).  It’s held in English once a month.

I got to do one of my basic Disciple-length sermons, rather than the good 1/2 hour-plus sermons I've been hearing.  That's because today a number of volunteers from these offices took presents to a Christian school in Klong Toey, one of the poorest areas of Bangkok.

After the presents (as well as a couple of what our Upper Midwest campers know as "Cow Games”—one of which really was a Cow Game, in which the kids made animal sounds), we volunteers ate with some of the teachers.  We had crispy Western-style fried chicken, french fries, chicken nuggets, wieners with no buns, ketchup, and tangerines.  NO RICE!  It's a new day.

Tomorrow our offices are closed for Christmas Day, but we are open again on Friday.

As for the all-night Christmas caroling last Friday night—this was the same thing my parents participated in actively back in the day.  Groups from different churches and ministries go around the city, singing at different Christian homes, and they are fed a meal each time—along with each person receiving a small gift.  (I didn't remember the gift requirement.  It could be new since the time my parents did this).

Since it was only my third day in the country, I got to be the host when the carolers arrived at the house.  My colleague/supervisor, Sharon, was singing with them.  We fed them a dish called "boiled rice."  It's really a clear broth with meatballs that you pour over rice, then doctor up with various chilies—hot, hotter, and hottest.  We also had crisp-fried garlic, sugar, and chopped celery on the side.  It was really good.  No, neither one of us cooked it.  Then there was store-bought Black Forest Cake and small ornaments for each person.

Nobody ate much, because they'd already been served four meals.  So I've been slowly going through the leftovers for some days now.  Really slowly, since each day we've had a free lunch at work.  We had a full cake left, so we took that to the International Church potluck lunch on Sunday.

A Blessed, Peaceful Christmas in these Twelve Days!

Anne Gregory serves as an Ecumenical Officer with the Church of Christ in Thailand. Her appointment is made possible by your gifts to Disciples' Mission Fund, Our Churches Wider Mission, and your special gifts.