Through the Belly of the Dragon

Just a couple of weeks ago, I took a journey that became a parable for me.  For three days right after Easter, I participated in a retreat with the entire national staff of the Church of Christ in Thailand, including the people from our Bangkok and Chiang Mai offices, as well as staff from a few other places—around 170 people in all.

We all flew to Trang in southern Thailand.  I had never been to this part of the country before, so I was excited.  The retreat was a lot like church conferences or conventions in the United States where I’m from because the days were long and packed full of meetings and Bible studies and worship services.  Of course, everything was in Thai.  Even though my command of Thai is surprisingly good for someone who hasn’t spoken it for 40 years, there was still much that I didn’t understand.

Still, it was an adventure from start to finish. On the second day, I went on a sightseeing trip with maybe a third of the group.  We were to ride in an air-conditioned, double-decker tour bus and see the sights around the city of Trang.  I had been told that the city tour would be better for me because I didn’t want to go with the snorkeling group and have to sit on a hot fishing boat for most of the day.

Our first stop on the tour was what looked like a peaceful boat ride.  These were small rowboats that would seat maybe seven people.  I didn’t understand everything that was said, but I kind of caught that there would be waterfalls and we’d go into a cave, and we might have to duck or even lie down here and there. 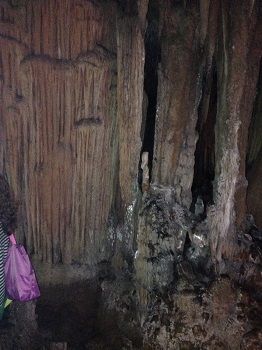 I got into a full boat, rowed by two boatmen/tour guides.  What I didn’t quite realize was that we were going to pass under an entire mountain (okay, hill) in our little rowboat.  We glided for a bit, and we got off and walked through different parts of the cave.  We looked at lots of stalactites and stalagmites, and several religious shrines.  We did have to duck several times.  There weren’t waterfalls, but there was water dripping, forming the stone “icicles.”  It wasn’t exactly hot in the cave, but it was so humid that we were all soaked in short order.  Then we got back in the boat.

Then the cave got smaller and tighter, and the boatman in the stern began to tell us that we were going through the “belly of the dragon.”  We were going to have to take off our shoes and lie flat on our backs for at least a kilometer (he didn’t mention that it would take 20 minutes or so).

It was kind of like going through a Magnetic Resonance Imaging (MRI) machine, which I have done in my life.  At any rate, the boat hit the sides of the “dragon’s belly” countless times, and I don’t know what the boatmen were doing.  I think maybe they were lying down, too, and pulling us through by grabbing the rock above us or on either side of us.  At one point the boatman told me I was going to have to take my purse off of my stomach, and try to lie even flatter in the boat.  Then it got really scary, because the dragon “bit” some of us in the stomach, including me—that is, we had to kind of scrape past the rock overhead.  I was afraid I was going to lose my glasses or that they might even get broken.  I don’t know how it was, but my white, flower-printed shirt got scraped a few times, yet didn’t get dirty. As the cave started to get a little wider, the boatman told us to touch a big round rock hanging down on the right side of the boat.  That was the “dragon’s heart,” he said.

The boatman also told us that anyone who successfully goes through the “belly of the dragon” and comes out the “mouth” will have all their prayers answered and have good luck for a lifetime.  It wasn’t long after that when we started to feel a breeze and see a little more light, and then we glided out of the “dragon’s mouth.” It was an amazing experience!

In the time since, I have begun to see similarities between that experience and Christian faith.  You’ve got to put all of your trust in Christ and lie flat on your back.  You’ve got to believe that you’re really not in charge of this life, this journey, and you’re not even the one protecting yourself.  You’ve got to let go of all your defenses and let Jesus “pilot you,” as it says in the hymn.  There are going to be helpers along the way and you may never even learn their names.  You don’t necessarily get to choose who your helpers are going to be.  And yes, sometimes you will get “bitten” at your most vulnerable times.  This is like the Christian life.

For those of us who are pastors and/or leaders, we may assume it’s always our job to row the boat or pull it through the tightest places.  But the truth is that it’s not always our job.  It’s certainly never our job alone, by ourselves.

You might think, “But the Christian life is a struggle!  Sometimes you’ve got to fight the good fight!”  But what if the “good fight” is with yourself?  What if your most difficult battle is with yourself?  What if your challenge lies in the words of Jesus, “apart from me you can do nothing”?  When Jesus was sleeping in the back of the boat and there was a storm, his disciples began to panic.  He brought peace, and they were able to get to their destination without injury.  (Mark 4:35-41)

Not for a moment would I suggest that we’ll never be hurt in the Christian life.  Many of the earliest disciples were martyrs, after all.  And, as you probably know very well, many Christians today live in danger of losing their lives in many parts of the world just because they are Christians.  What I am suggesting, however,  is that when you put your trust in Christ, the way we passengers had to lie down in the rowboat and ride through the “dragon’s belly,” then the core of yourself, that part that God treasures, teaches, pilots and guides will come forth like gold.  (Job 23:8-10)

Anne Gregory serves with the Church of Christ in Thailand. Her appointment is made possible by your gifts to Disciples Mission Fund, Our Churches Wider Mission, and your special gifts.