Through the Eyes of Children 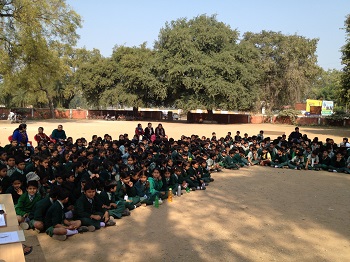 The beauty of life is seen through the eyes of children all around the world. Just a short walk down the road from Christian Hospital Mungeli is the Rambo Memorial English Medium School (RMEMS). There, you have the vibrant energy of young people, from nursery to 12th standard. As you walk through the halls of the school, you can literally still hear the students’’ laughter and the pattering of feet, long after they have gone home and the classrooms are empty. Each day, students learn to cherish life, respect each other, and embrace the unique learning opportunities that are available to them outside, as well as inside, of the four walls of their classroom.

Monocytes….leukocytes….eosinophils. These are all words that graced my ears one morning as I entered the laboratory of the out-patient department (OPD) at Christian Hospital Mungeli. With test tube in hand, Mr. Davendra Kuldeep, laboratory technician, was sharing information pertaining to the various components of the blood; red blood cells, white blood cells, and platelets. The life giving fluid connective tissue that flows through every aspect of our body. It carries nutrients, oxygen from the lungs to the other cells of the body, and carbon dioxide from the body to the lungs. The blood….We cannot live without it. 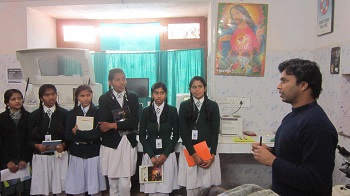 Standing around the laboratory in a semi-circle was a 10th standard Biology class from the Rambo Memorial English Medium School. With their eyes gazing forward, the class listened intently on material regarding the blood grouping system as they eagerly awaited a demonstration on how to perform blood typing tests and their opportunity to visualize how blood cells appear under the microscope for the first time. The students were excited as they together learned more about the blood and its integral part in the sustaining of life seemed fascinating.

Every avenue in which young people have the opportunity to grow and expand their horizon is a rewarding experience for them. It was a beautiful, sunny day. The perfect setting for an outdoors debate competition on the grounds of the Rambo Memorial English Medium School. It seemed as if the whole atmosphere was smiling as the rays of sun beamed down upon the school yard. As I took my seat at the judge’s bench, along with the two other judges, I thought to myself, “Wow…Brand new mercies each day.” 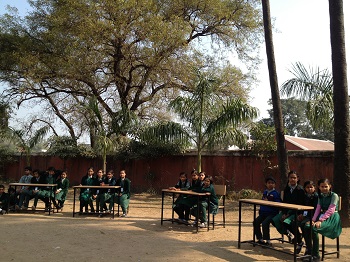 I could feel the energy of the audience which consisted of exuberant students, teachers, and staff as they eagerly awaited the debate to get underway. The topic; Should cellular phones be allowed in school? Debaters consisted of a total of sixteen students; four students each from 5th, 6th, 7th, and 8th standard classes. Each student was allowed a maximum of two minutes in which to present their argument; whether for or against the allowance of mobile phones in school. A question and answer period was allotted for each debater after the conclusion of their speech. Each team, pro and con, consisted of eight students.

These students were very sharp as they presented convincing arguments on both sides. Members from the team against cellular phones presented arguments that were very thought provoking. One debater stated that it robs students of their memory and precious eye-sight due to the amount of time that you spend looking at the phone and relying on it to look up answers instead of relying on your own intellect and knowledge. Another referred to it as an “entertainment device,” with availability to social networking and online games that would likely capture the student’s attention and, therefore, distract them from school work and valuable information that is being taught in the classroom. Students were judged on content and presentation. Although all debaters did a noteworthy job; there were five winners. One student for first place, one for second, and three students tied for third.

Another momentous occasion for the school is the night the Rambo School dance team won first place at the Friends, Youth, Welfare, Society Interschool Dance Competition held near the Agar Club Purana Busstand, Mungeli. They were one of 12 schools in the city of Mungeli to audition and earn a coveted spot in the competition. Their theme was the Shooting in the Army Public School in Peshawar, a city in the northwestern region of Pakistan. This tragic event occurred in December 2014 in which many people, including 132 students, were killed by the act of terrorists. Their moving performance captured the hearts of everyone in the audience. It was the first time that a theme dance had ever been performed in the history of this competition. Mr. Avinash Prasad, Principle of the Rambo Memorial English Medium School, stated, “I was so happy that they could think on that track. It was their brainchild.” The teachers helped, but it was the students that chose their own theme, choreographed the dance, and selected a melody of songs to coincide with the action and emotions of the story.

Everyone was amazed at how expressive the students were in conveying the story through contemporary dance. The performance encompassed dance moves with a range of emotions and corresponding facial expressions that all intertwined to tell the full story, leaving the audience playing at school. It continued with the shooting and the loss of lives with one student being spared because he did not attend school on that particular day. The scene then focused on the grieving parents, the fight between Pakistan and Hindustan, and concluded with the core values of a nation and culture to peacefully coexist with each other.

“As I was dancing, I was thinking about how the students must have felt at that time and how their parents must have felt,” explained 9th standard student Srishti Bagh. “I would like to say to everyone that we should not fight. We are all the same and should live as friends.”

Kahala Cannon serves with the Synodical Board of Health Services of the Church of North India.  She serves as a dentist at the Christian Hospital in Mungeli, India. Her appointment is supported by One Great Hour of Sharing, Our Churches Wider Mission, Disciples Mission Fund and your special gifts.