The catastrophe will be that one day I pass the house, after they have kicked us out, 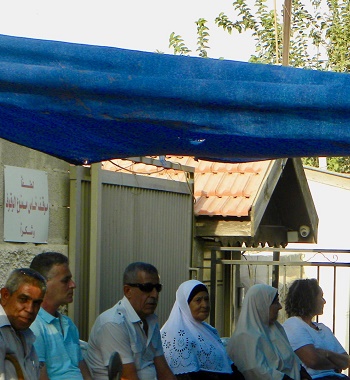 The Nakba continues in occupied East Jerusalem, especially in the Sheikh Jarrah neighborhood where at least 16 families face eviction on one side of Nablus road and another 24 on the other side of the road.

After more than 50 years, since 1964, the Shamashneh family of 8 were kicked to the dusty curb. They had fought for years to stay in their home and had won an extension because of the elderly family members.

Why were they evicted? Technically, because there are laws that privilege Jews over Palestinians. There is a law that says any Jew around the world can come to Israel. There is another law, passed in 1970 after the 1967 War, that says Jews who lost property in either 1948 or 1967 can get compensation and housing and can even return to their homes.

The Shawmasneh family was thrown out of their home because the original owners from before 1948 claimed it even though they had a home (perhaps originally Palestinian) given to them in West Jerusalem.

There are more than 3,000 settlers living in properties, which prior to 1948  were owned by Palestinians, throughout the Jerusalem area. The eviction of the Shamashneh family, however, is the first since 2009 and is a sign that indicates Israel is speeding up its efforts to take over all of Jerusalem, to “Judaize the city,” as some have said.

In addition to the human tragedy of forced displacement and the loss of a home or property generate for those families ---, there is also a restriction of public space, residential growth, and freedom of movement leading to increased friction and violence.

As if this were not enough, there is also the layered effect that most of the residents of the Sheikh Jarrah neighborhood are descendants of refugees displaced from West Jerusalem, Jaffa, Haifa, or Lod. They have already been forcibly removed at least twice before.

It is important that the Israeli public, or at least its handful of activists, keep a presence or vigil in Sheik Jarrah to help keep the whole neighborhood from being expropriated by settlers.  It is equally important to bring to the forefront the nature of the democratic state. Ayman Odeh, a Palestinian citizen of Israel and elected member of the Israeli parliament (the Knesset) from the Arab List, put it this way after a recent visit to the neighborhood, “The cruelty of evictions in Sheikh Jarrah are the epitome of Israeli apartheid. The law allows only Jewish families to reclaim their homes from before 1948.”  Israeli journalist Gideon Levy put it this way in a recent opinion piece for Haaretz, “Another dunam [1/4 of an acre] and another goat, as the Zionist saying goes, and Sheikh Jarrah will be Jewish...Another dunam and another goat, and the transfer will intensify and the apartheid state will stand on legal foundations.”

The right of return for Jews to Israel along with the right to claim lost property by Israeli law is horribly highlighted in this story of 8 Palestinians forced from their home. We are reminded that laws unequally applied cannot lead to justice, let alone peace.