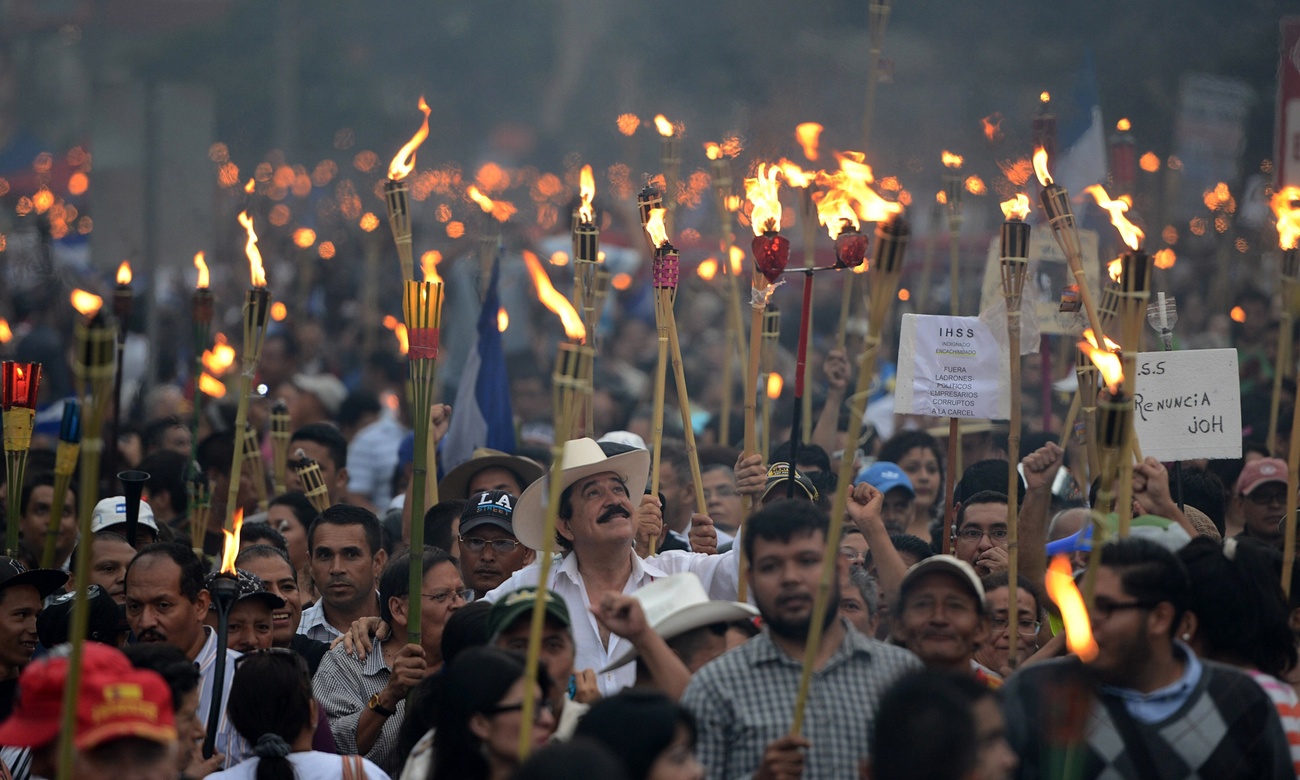 Don and I watch with interest the news of the marchas de las antorchas, Torch-lit Marches, in Tegucigalpa and San Pedro Sula.  Students and middle-income workers, who call themselves the indignados, the Indignant Ones, are calling for an end to government corruption. Then, one evening, we saw the Torches in our small town of Yoro. We heard rumors they would be marching in the evening, taking the protests country-wide. The march in Yoro was loud as protestors’ voices blasted from loud speakers, but it was peaceful. They blocked traffic for a short time, but since our business district is only three blocks long, it didn’t cause much disruption. They carried signs and banners denouncing corruption, demanding accountability from leaders and calling for the resignation of the President Juan Orlando Hernández.

For the past six weeks surrounding the anniversary of the bloodless coup d’état of 2009, protesters have been demonstrating against massive corruption by top government officials. The protestors allege that the director of the Honduran Institute of Social Security (IHSS) created a network of sham companies, embezzling $350 million and providing his wife, girlfriend and brother with extravagant vacations, fancy cars and real estate holdings in several countries around the world. In the meantime, the medical care system in Honduras left dying patients without life-saving medication or hospital care. Here in Yoro the government health center has no medications. No antibiotics. No analgesics. The mother of a friend of mine has a brain tumor, but chemotherapy drugs are not available to someone without the means to pay for them. She has no medication to control the pain. There are no nurses to provide her care in the hospital.

To complicate matters, days after the embezzlement came to light, the chief witness to the corruption was assassinated. The protesters are asking for an independent investigation into the embezzled funds and the murder of the witness. In response to the Torch Marches, President Orlando Hernández has offered to personally investigate the missing money, which many see as putting the fox in charge of the henhouse.

On a recent visit to Tegucigalpa, a main thoroughfare was closed off by a group of hunger strikers. The strikers are calling for the UN-backed International Commission against Impunity (CICIG) to investigate the government corruption. The Commission has shown some success in Guatemala and promotes witness protection. Keeping witnesses alive long enough to testify has been difficult in Honduras, where murders are seldom investigated. The marchers and strikers are effectively closing the roads in this highly congested city. What better way to get the attention of millions?

I was ten when Martin Luther Kings, Jr. organized peaceful demonstrations. I was too young to go to Selma to march across the bridge, but my UCC pastor father was watching with interest and wishing he were there with his colleagues. He educated me on issues of civil rights and peaceful resistance. King, when offered the opportunity to dialogue with the government, knew that the word ”wait,” generally meant, “never.”  King knew that to gain leverage in the national arena, he needed to cause disruption. In a letter from Birmingham City Jail, he wrote, “We know through painful experience that freedom is never voluntarily given by the oppressor; it must be demanded by the oppressed.” Like King, the Torch Marchers are causing peaceful but strong disruptions and their voices are being heard.