I saw heavy machinery up ahead as I parked on the ridge road a few miles north of the border with Mexico.  When I got out of the car, I could see a tower in the east and another one in the north.  None of that had been there the last time I was on that ridge just three months ago and I was curious to get a closer look when I returned from the hike. 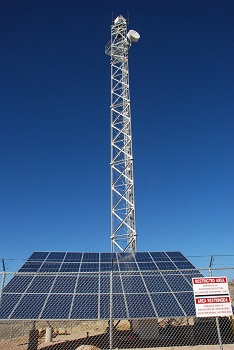 The machinery was at a construction site on top of a hill with an extensive view.  “Do not enter.  This site is under video surveillance,” read the signs, in English and Spanish, along the perimeter of the site.

The northern tower was surrounded by a fence and had the same bilingual warning.  Two cameras were mounted on top of the tower, a microwave dish extended from the side, and a large solar panel was at the base – an imposing image set against the desert sky.

While I was taking that photo, Todd Miller and Gabriel Schivone were posting an excellent article entitled Gaza in Arizona.  I saw the article the next day and I was startled to read, “Customs and Border Protection (CBP) contracted with Israel’s giant military manufacturer Elbit Systems to build a ‘virtual wall,’ a technological barrier set back from the actual international divide in the Arizona desert...CBP has tasked Elbit with creating a ‘wall’ of ‘integrated fixed towers’ containing the latest in cameras, radar, motion sensors, and control rooms.  Construction will start in the rugged, desert canyons around Nogales.”

I sent a message to Todd with the photo and asked, “Could this be part of the ‘wall’ of ‘integrated fixed towers’ that Elbit is building for CBP?”  He responded a few minutes later, “Very interesting!  I’m going to check it out.”  He and Gabe drove to Nogales the next morning and we went out together to see the tower.

We were greeted by an armed security guard and one of the construction workers who told us, “You can’t go any further because there’s moving pieces and equipment.”  Todd mentioned that we had seen the tower from the road and we were wondering what it would be used for.

In “Gaza in Arizona,” Todd and Gabe describe how the University of Arizona is recruiting Israeli security companies to set up operations at the Tech Parks Arizona campus in Tucson.  The program is called the Israel Business Initiative.  The Department of Homeland Security designated the University of Arizona as the lead school for the Center of Excellence on Border Security and Immigration in 2008 and the university has received millions of dollars in federal grants.

President Obama strongly supports “free trade” policies that enable corporations, like Elbit, to easily travel around the globe in search of increased profit but he opposes providing that same freedom of movement for workers.  The minimum wage in Nogales, Sonora is now $5.20 per day while the minimum wage in Nogales, Arizona is $8.05 per hour.  Elbit’s virtual wall will help ensure that the women and men who assemble products for U.S. companies in Nogales, Sonora stay on the lower-wage side of the border.

Todd and Gabe quote Roei Elkabetz, brigadier general of the Israel Defense Forces, at the beginning of their article.  “We have learned lots from Gaza,” he said.  “It’s been a great laboratory.”  That laboratory is now being extended to Arizona.

Scott Nicholson, a member of University Congregational UCC, in Missoula, Montana, serves as a volunteer with the Hogar de Esperanza y Paz (Home of Hope and Peace) community center in Nogales, Mexico. His appointment is made possible by your gifts to Disciples' Mission Fund, Our Churches Wider Mission, and your special gifts.