Training People to Be a Human Rights Resource

Since September 2012, Interfaith Cooperation Forum (ICF) has been holding a series of workshops to train some of its School of Peace (SOP) alumni to be resource people in the area of human rights. The third workshop in this series I conducted with another ICF staff person, Sopharak Hem, from Oct. 20 to 23 in Phnom Penh, Cambodia, with Buddhist, Christian and Muslim participants from the Philippines and Sri Lanka as well as the host country and a new ICF intern from the United States. 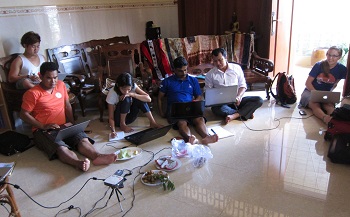 A major focus of the workshop in Cambodia was to prepare a curriculum and methodology for conducting future human rights workshops for SOP alumni and others beginning in 2015. Two of the participants of the workshop in Phnom Penh will be the resource people, along with myself, for this program in southern Thailand early next year.

In addition to preparing for next year’s human rights workshop, the participants also discussed the link between corruption and human rights, noting that both corruption and human rights violations take place in a context of weak respect for the rule of law that fosters impunity for the perpetrators. The participants also observed that corrupt practices can lead to a denial of people’s rights, such as through the illegal diversion of funds for education, health care, shelter, etc. As for the attitude of people in Cambodia, the Philippines and Sri Lanka toward corruption, the participants said that people feel powerless and often keep silent because they fear the consequences if they expose corrupt behavior. Because the practice is commonplace, some people even believe it is a normal part of life.

Part of the workshop was also devoted to an overview of community organizing, or CO. Human rights abuses are seen as issues around which people in a community can be organized, and CO is also regarded as a tool that can be utilized to help people protect their rights.

Another topic of discussion was faith and human rights. With Asia’s major faiths and the spirituality of indigenous people ingrained in the culture of every country in the region, a question that arose was “Why are human rights violations so prevalent, especially in South and Southeast Asia?”

Among the answers, particularly pertaining to so-called religious violence, the participants said that religion is manipulated and misused by politicians, especially to attain votes during an election, and that religious holy books are sometimes misinterpreted to foment tension and violence between people of different faiths. Moreover, some people of faith choose to remain silent because they perceive these issues as political problems that are unrelated to them, but their silence, the workshop participants believed, passively condones this violent abuse of people’s rights to continue to take place.

Bruce Van Voorhis serves as missionary with the Asia and Pacific Alliance of YMCA’s in Hong Kong.  He serves as the Coordinator for Interfaith Programs. His appointment is made possible by your gifts to Disciple's Mission Fund, Our Church's Wider Mission and your special gifts.