Four months of my UCC New York - Evangelische Kirchen Hessen Nassau Partner internship have flown by. The Rheingau enjoyed a gloriously warm summer and autumn, and now we're resigning ourselves to the well-known grey, damp and chill of coming winter. Germany, like the rest of Europe, is tied to its ancient Germanic and Celtic tribal rhythms, and when the weather turns dreary, the cycle of celebrations and holy days kick in. Special baked goods, new wine (Federweisse in the Rheingau), and lots of music (kids grow up learning how to sing canons) warm the heart and brighten the gloomy sky. 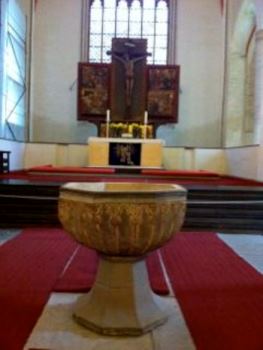 Being the first American to occupy a Vikariat in the state of Hessen, no one knew what to expect; some of the details are still being worked out, principal being financial of course. But good will and cooperation are moving that part along. The fact that I was assigned to the Bergkirche, the focus of religious resistance in Hessen during the Nazi occupation, is more than good fortune: Mother God knew where to send me. My connection to the church might have ended in my teen years, had I not learned about Dietrich Bonhoeffer, Martin Niemöller and the Confessing Church during my first stay in the Rheingau forty years ago. Now I am living across the hall from the Niemöller Archive in the 3rd floor of the Bergkirche community house. Niemöller was imprisoned in various concentration camps from 1938 to 1945, and spent his first night in freedom in the Bergkirche. He was one of the authors of the Stuttgart Declaration of Guilt, signed by leaders of the Evangelical Church of Germany in October of 1945.

I have the honor of participating in some of the ongoing efforts of the German people to acknowledge guilt, and to honor the victims of the Holocaust. The Stolperstein (stumbling stone) monument, created by artist Gunter Demnig, commemorates victims of the Holocaust, one person and one stone at a time. Stolpersteine are bronze, cobblestone-sized memorials that are set into the street or walkway in front of the place where the individual formerly lived. Each commemorates a person who was victimized by the Nazi regime, those who died and survivors alike - people who were sent to prisons, euthanasia facilities, 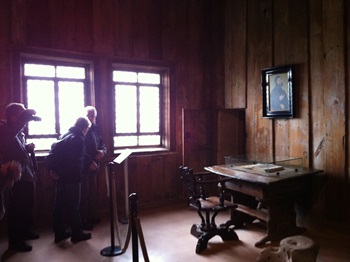 sterilization clinics, and concentration and extermination camps, as well as those who were compelled by persecution to emigrate or to commit suicide.          The stones have now been placed in several countries and hundreds of towns and cities.

During the first week of October, Marcia Meabon of the Michigan UCC Conference (in partnership with the Evangelical Church of North Pommern) got in touch with me through Rev. Martha Koenig Stone. Pastor Petra Huss of the Evangelical Church of St. Mary in Anklam, North Pomern, had been searching for 5 months, for an American who would participate in the 75th anniversary memorial service of the bombing of the town of Anklam. North Pommern. There was a certain amount of concern among my pastors and the EKHN Deacon about the political implications of my participation, due to a strong Neonazi presence in this area.

In the end, the decision was left to me. I read a statement, written by Pastor Matthaus Tuve of the Evangelical Church Ecumenical Council, in Pommern, and participated in the other memorial events of the day.  Following is a short summary of the bombing story: 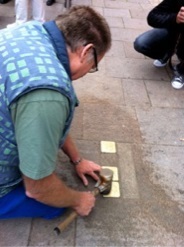 “On October 9th, 1943 - 75 years ago – the bombing of the village of Anklam was the first civilian target of the American bombing campaign in Germany. The intended target was the Arado airplane factory, but the market square was destroyed, and the churches were badly damaged. It was a market day morning, and the square was full of people. Within 10 minutes, over 350 people were killed (many of them elderly, women and children)...”

The experience of being an assistant pastor, with the duties and privileges of a German Vikariat, means that I am fully qualified to officiate weddings, funerals, communion, and baptism. Along with Bible study, solo Sunday and retirement home church services, confirmation class, religion classes at the local elementary school and a variety of church committees. I also have “Seelsorge,” literally soul-care duties. Because there are two pastors, with two somewhat different theological and personal perspectives, I've tried to shadow both of them as much as possible, which makes for a busy week! Checking in with my regional Deacon, Dr. Martin Mencke, I found out that I'd taken only a fifth of my allowable vacation days! I'm not complaining! I love my job.

In mid-October we took a Luther Trip organized by Sunny Panitz. I served as sometime tour guide, translator and general hand-holder as folks got used to travel in Germany.

A particular phenomenon that is unfolding in Wiesbaden is the influx of US military servicemen and families that will bring the US military population to around 20,000. The USAREUR (US Army Europe) will now be centralized here, as bases in Heidelberg among other post-WWII bases close. As of today, there is no English-language congregation in the area, in which Americans can participate in liturgical worship as it is practiced by the Evangelische Kirche in Germany. Our midnight Christmas service had 20 or more US visitors – ostensibly because they had heard an American was one of the pastors.

This interest in cross-cultural church experience has sparked my interest. I see a wonderful mission opportunity here. Right now the only English congregations are conservative “free churches” that are not part of the typical German church experience.

Purely an aside: I sang a benefit song recital at the Bergkirche on February 9th.  We raised €676, $918, for the church's renovation fund. As pastor Markus Nett said, that will be a fair number of bricks! After 6 months of barely singing – well, it's a challenge, but I'm enjoying having music in my life again.

I will keep you posted on any developments in this direction, and welcome ideas and input.

Rosalind Gnatt serves as a Long-term Volunteer with the Evangelical Church of Hesse-Nassau, Germany. She has a pastoral leadership position in a local congregation.