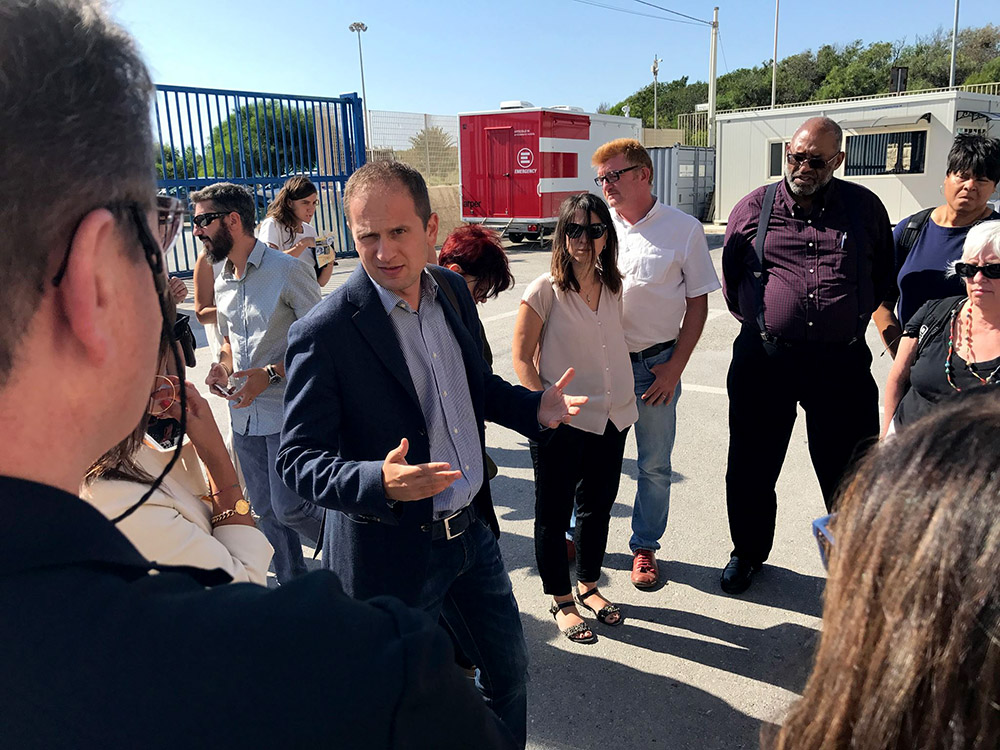 Almost a dozen executives and leaders from the United Church of Christ, recently returned from a 17-day trip in Europe, spent the journey exploring questions about what it means to be a reforming church in today's world.

The group of UCC board members, conference leaders, national staff, colleagues from affiliated ministries and from the United Church of Canada, made stops in England, Switzerland, Hungary, Italy and Germany Sept. 10-26, meeting with Global Ministries mission partners (the shared ministry between the UCC and the Disciples of Christ) and with ecumenical colleagues.

As the Rev. John C. Dorhauer put it, "After 500 years of reformation, leaders from the United Church of Christ traveled to the places where this work began and explored how it is the Spirit is moving today and what we intend to do to stay faithful."

Dorhauer, general minister and president of the UCC, said that two topics frequently came up in each place the group traveled: refugee and immigration advocacy, and race equity.

"In Sicily, we stood upon the shores where last year 19,000 refugees from Africa crossed an angry sea on an inflatable raft with the slim hope of finding a better life," Dorhauer said. "Our reform partners in the Waldensian church make sure that when they land they are greeted first with a warm smile and a hearty embrace. We walked through the holding center where they will spend their first days, waiting to find out if they will be among the ones granted status and allowed to stay and pursue a new dream in a new land... In Germany, we visited the memorial site that was the Concentration Camp in Sachsenhausen. Nothing had a greater or deeper emotional impact on me — and I daresay this was true of others in the delegation."

The Rev. James Moos, a UCC national officer and co-executive of Global Ministries, said he is "continually impressed with the depth of theological reflection of our partners and the ways those reflections translate into action. The work that they are doing is consistent with our own commitments around the 3 Great Loves."

"They are welcoming of refugees, they provide more than services — they provide human relationships and spiritual care," Moos said. "They are also deeply committed to serving marginalized groups that already exist within their societies, such as the Romas (Gypsies), served by the Hungarian Reformed church."

The group also visited Geneva, where the World Council of Churches is headquartered, and participated in a dialogue on race and xenophobia against black and brown people. The "Hearing on Racism, Discrimination, Afrophobia and Xenophobia", which took place Sept. 25 at the Ecumenical Centre, gave speakers and attendees the chance to reflect, and often lament, on the experience of African-Americans.

"The opportunity to once again place racism on the international platforms of the World Council of Churches and The United Nations provides another opportunity for global partnership and voice against the assaults against black and brown bodies happening in the United States," said the Rev. Traci Blackmon, a UCC national officer and Missouri pastor who was part of the pastoral presence in Ferguson after the fatal police shooting of black teen Michael Brown.

The Rev. Karen Georgia Thompson, UCC ecumenical officer, said the WCC hearing was a vital step in the commitment to justice for all God's people. "The global ecumenical community is concerned about the anti-black racism and resulting tensions that are evident in the United States," Thompson said. "The hearing focused on bringing leaders from the U.S. to provide testimony of the problem.  The visits to the United Nations following the hearing provided opportunities for the WCC and church leaders in the U.S. to advocate for action on behalf of African descendant people in the U.S. and the on-going violations of human rights that are being witnessed. The call to action is local, national and global. These arenas will be engaged to bring about long-term changes on-behalf of African Americans and African descendant people globally."

As Moos said, "Together, we and our partners are committed to building a just world for all."