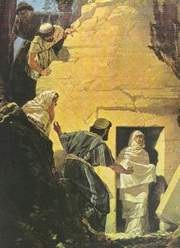 In our Gospel story about Lazarus, Jesus comes late to Mary and Martha's home. Mary chastises him for not getting there sooner because he might have been able to do something to prevent their brother's death.

I identify with this passage because we who are activists working on a just peace in Palestine hear about tragedies here after they have occurred. So there is always this sense of deep sadness that if we had been able to come earlier, done something more, we could have prevented this. If only we could have done more to stop the violations against human rights, to have challenged the narratives that say this land belongs to only one group, signed more petitions, divested or invested more, just done more period.

And because we care, like Jesus, we weep for our slain sisters and brothers, the children tortured or imprisoned, the families made homeless through home demolitions or impoverished because their trees were uprooted or burned. Like Jesus we weep.

When I was an Ecumenical Accompanier back in 2011 we would often arrive just after the olive trees had been destroyed or a few hours after a village about been terrorized by a night raid. We came after. And so we often wondered what if we had been able to come before?  Could we in our magic EAPPI vests stop "an incursion?" A wrongful death about to happen? Our accompaniment came after the fact and we often wondered if this coming at this time was enough.

Palestinians have often told me that that they identify with Lazarus. Once at the Sabeel Center Thursday worship I heard Omar say, “I am Lazarus. I feel entombed by this occupation. I can’t move because of this very large stone.” According to Naim Ateek, the leader of that discussion said that removing the stone is only the first step, however. The second step is to come out and risk being alive again and free. ‘Rise, Lazarus. ‘It is not enough to roll away the stone if you don’t come out and dare to live.”

Every Friday in Palestine I see this part of the Lazarus story re-enacted when the Palestinian people rise to face their oppressors at the flash points of the occupation, at the prisons, at the wall, in the reclaimed villages. Lazarus rises every day because to exist here and not lose your hope or humanity is a miracle. However the spirit of Lazarus is especially present on Fridays when I witness the people unbinding themselves in public. Lazarus is not free until he is unbound.

Coming forward is the first step but it is not the last. The community must unbind him from his death shroud. I experience the holiness of this moment when I see the men and women denied access to Al Aqsa kneeling on the ground in the street. Their prayerful defiance is an act of faith and hope and it is done communally. When I see the people of the world put pressure on Israel to end the occupation, obey international law and respect human rights, I see the entombed Lazarus struggling to become free. Our work for a just peace is an ongoing unbinding process.

So as you have heard me say before, weeping is good. It is the right place to start but it cannot end there. Removing the stone is next, and then the coming out. We, from the faith community, can assist in removing the stone that entombs but only the Palestinian people themselves can walk out---define what sovereignty looks like. The removal of the bandages or daring to live with them is a communal event. It takes many shapes and forms which can include endless cups of chai, dabke dancing, planting or harvesting olive trees, and buckets of tears.

So dear ones this is the hope of this Lenten Gospel reading. Our sisters and brothers who have been entombed will rise with or without us. The question is where are we in the story? Are we standing there paralyzed by the force of our own weeping? Are we working or chipping away at the stone? Are we throwing stones at the stone?

And when Lazarus appears bound in his death shroud, what do we do? Do we run away in fear?  Do we join with the others in the gentle task of unbinding one bandage at a time?

Loren McGrail serves with the YWCA Palestine assisting in communication and development. Her appointment is made possible by your gifts to Disciples Mission Fund, Our Church’s Wider Mission, and your special gifts.