Understanding Colombia’s Vote Against the Peace Accords and What Lies Ahead: Especially for churches working for peace 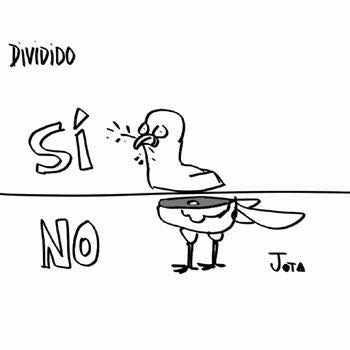 These opening lines from Charles Dickens’ A Tale of Two Cities, could also apply to a tale of two Colombias. My colleagues, friends and I watched, somewhat in shock, as report after report came in yesterday showing that the No vote had won in Colombia´s plebiscite on the peace accords that just a week earlier had been signed between the Government of Colombia and the FARC guerrilla. Polling in the weeks leading up to the plebiscite indicated that Yes would prevail with around 65% of the vote. In the end, No won by the slimmest of margins; 50.2% No, 49.7% Yes.

Why/How did this happen?

For many reasons. 1. It got real political. For many people the vote came down to President Santos or FARC vs. former President Uribe. If you felt closer to the former camp, you voted Yes, if the latter, No. Frankly put, the plebiscite demonstrated that former 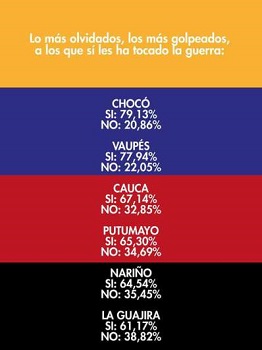 President Uribe is still the strongest political figure in Colombia. 2. Distrust/anger towards the FARC. The main concerns of those who voted No were that the accords allowed for no hard jail time for FARC commanders who complied with the transitional justice mechanism; that FARC commanders would be allowed to run for political office and guaranteed a minimum of 10 seats in congress for two terms. 3. The opposition played dirty. Uribe was able to spread the fear that if Yes won, Colombia would be “given over to the FARC”, that “Colombia would become Venezuela or Cuba” and what has to be most concerning for those of us who care about our churches, that the peace accord contained a hidden “gender ideology” that promoted an LGBTI agenda that sought to destroy the family which led to most evangelical churches in Colombia promoting the No vote on moral grounds. In former President Uribe’s speech last night he specifically thanked “moral pastors” for their support for the No vote and for defending the family.

Why was voter turnout so low?

Unfortunately only about 37% of Colombia´s electorate voted in the plebiscite. Even more unfortunately, this was expected and is about normal for any election in Colombia. Voter apathy is a serious challenge to democracies all over the world and is certainly not unique to Colombia. Though to many of us this was a unique and historical vote for Colombia, the politicization of the plebiscite ensured that it was perceived by many as just another vote that wouldn’t change anything or affect them in any meaningful way. Perhaps another key to understanding this is that since the early 2000’s the war has been mostly fought deep in the countryside. Most Colombians (approximately 65%) live in urban areas, relatively untouched by the war. 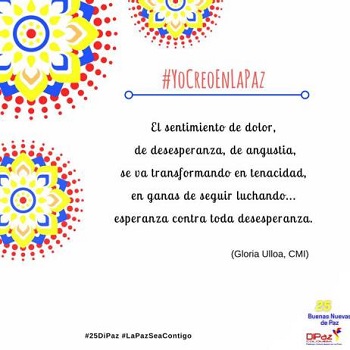 Most of the rural areas of Colombia that have been hardest hit by this war for the past 52 years voted overwhelmingly Yes. One example is the community of Bojayá, perhaps the most symbolic example of innocent civilians killed in the crossfire. 79 civilians were killed inside a church where they took refuge during fighting between the FARC guerrilla and paramilitaries in Bojayá in 2002. Yesterday 96% of Bojayá voted yes, 4% voted no. One magazine headline stated it simply, “The Victims Voted Yes”.

The good news is that both the FARC and President Santos have said they are committed to peace and to finding a way forward. They both have declared that the bilateral ceasefire remains intact. The opposition to the accords (led by former president Uribe) has repeatedly said that their No was to aspects of the accords, not to peace generally and not to the accords outright. In other words, the No vote is not a mandate to return to war. Both President Santos and former President Uribe have named three negotiators to sit down and try to work out a political solution to this political impasse. May cool heads prevail and may good solutions be found.

Our partners in Colombia, Justapaz of the Mennonite Church and the Peace Commission of the Evangelical Council of Colombia as well as the Interchurch Dialog for Peace in Colombia (of which they are both a part) are now seeking to “read the signs of the times”, both in terms of how best to keep working for peace on a national stage and how to address what appears to be a moralistic anti-LGBTI stance that trumps peace, compassion, forgiveness and justice for those most affected by this war. This turn of events is deeply disappointing for our partners (and me as well) but their resiliency, their faith and their resolve will undoubtedly rise above that as it has for the past 52 years. We will find a way forward!

Your prayers, your words of solidarity and encouragement are deeply meaningful at this time as we are reminded that our faith is in God and in this stubborn, beloved community we call church.

Michael Joseph serves with Justapaz, the Mennonite Center for Justice, Peace and Nonviolent Action, to coordinate the Peace Studies Center at the Baptist Seminary and University of Cali. His appointment is made possible by your gifts to Disciple's Mission Fund, Our Church's Wider Mission, and your special gifts.