Ferdinand Marcos was president of the Philippines from 1965 to 1986.  Keeping in mind we’re using the term “president” loosely.  His 21 years of rule was mired with corruption, human rights violations, severe expansion of the State, and unchecked pilfering of public funds and international foreign aid.  Prior to developing this notoriety, Marcos had made a name for himself by leading a vigilant and successful guerrilla force called Ang Maharlika (The Noble) against the Japanese occupation during World War II. 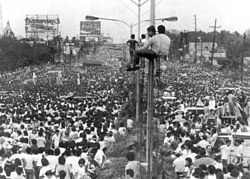 Through his presidency, he amassed billions of dollars in debt developing infrastructure throughout the nation and instituting agrarian industrialization.  Privately held businesses and land were taken under the guise of tackling the problem of oligarch rule which has long plagued the Philippines (and still exists today) and either placed under State control or simply handed over to politically connected elites.  The military ballooned from a modest 65,000 person force to 260,000 to combat the popular communist insurgency New People’s Army while civil agencies were militarized. Opposition came from all corners, but the most prominent were among the Liberal Party with criticism of the Marcos administration being spearheaded by Benigno Aquino, Jr. (father of current president Benigno Aquino III).

In August of 1971, the Liberal Party held a rally in Manila.  As candidates took the stage, a fireworks display began to commence the event when two explosions occurred killing 9 people and leaving over 100 injured.  While allegations for who was responsible ranged from the Nacionalistas (Marcos’ political party), the Communist Party of the Philippines, or Marcos himself, the following month saw several more bombings of public buildings throughout the national capital region.  The pressure came to a head with Defense Secretary Juan Enrile’s attempted assassination on September 22nd.  Shortly after, formal declaration of martial law was made, but it was discovered that the proclamation that imposed martial law was already signed as early as September 17th leading many to determine that Enrile’s murder attempt was staged.

Shortly after martial law was declared, political rivals were arrested, detained, or murdered.  Among those arrested was Benigno Aquino, Jr.  After years in prison, he suffered two heart attacks and requested to be cared for in the United States as he feared potential controversy by having surgery at the Philippine Heart Center (one of many health centers established through presidential decree during the martial law era).  In the U.S. he self imposed exile for him and his family.  As the years went on and the condition of the Philippines began to deteriorate, Benigno Aquino made the decision to return to his country when the condition was ripe for potential change.  On August 21, 1983, Aquino returned to his homeland, just to be gunned down in the airport upon arrival.  He was killed 12 years to the day of his attempted assassination at his Liberal Party rally in Manila; however, his death provided the spark Filipinos used to push for the People Power Revolution.

The following three years was consumed by non-violent resistance movements, mass demonstrations, and international pressure condemning the Marcos regime.  These efforts culminated in the EDSA Revolution, or the Philippine Revolution of 1986.  Two million Filipinos marched down EDSA Avenue (the main thoroughfare in Manila) that included civilians, political leaders, military defectors, and religious leaders and organizations.  The election held a couple weeks prior on February 7th involved Marcos and Benigno Aquino’s wife, Cory Aquino, and was deemed fraudulent worldwide and was the straw that broke the camel’s back.

On the morning of February 25th, two inaugurations were held: one for Cory Aquino and one for Marcos as both considered themselves the winner, but with Aquino garnering much larger public support and attendance.  Hundreds of protesters were attempting to storm the Malacana Palace where Marcos was holding his inauguration ceremony.  They were prevented from overcoming the gates by priests who encouraged non-violence.  By midnight that same day, Marcos and his family boarded rescue helicopters provided by the U.S. where they were taken to a nearby U.S. Air Force base and flown to Hawaii where they remained in exile until Ferdinand’s death.

Matthew Fehse serves as a Global Mission Intern, serving the United Church of Christ in the Philippines. His appointment is supported by Week of Compassion, Our Churches Wider Mission, Disciples Mission Fund and your special gifts.