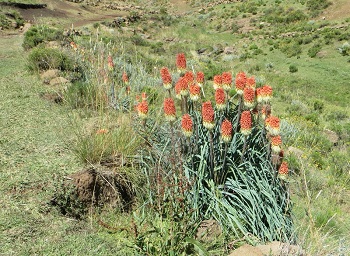 “Make every effort to keep the unity of the Spirit through the bond of peace.” (Ephesians 4:3)

With over 20 political parties to choose from, there is not much chance of finding unity of choice among the voters in Lesotho.  However, in the recent elections held at the end of February there does seem to have been a united commitment for a peaceful process and for that we can all give thanks to God!  The elections, held two years earlier than scheduled, were brought forward to help resolve the political turmoil and security concerns that arose from a fallout in the ruling coalition.  As in 2012, no single party achieved a majority of the seats in parliament and a new coalition government, headed by former Prime Minister Pakalitha Mosisili, has been formed.  In May 2012, Dr. Mosisili turned the reins of power over to Dr. Tom Thabane.  On March 17, Dr. Thabane returned the favor.  They are to be congratulated for these peaceful and smooth transitions of power.   Dr. Mosisili’s government has only a slim 65-55 majority, so working with the opposition will be necessary to make constitutional reforms which many observers feel are needed to prevent a repeat of the crises of 2014. 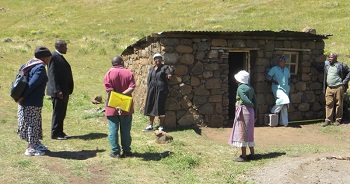 I always enjoy being up in the mountains of Lesotho during summer.  Shortly after returning here last month, I made a trip up to Bolahla to check on the new school buildings which were just about finished when I left last year.  The altitude, sunshine, blue sky and green fields were a delight to experience once again.  As I hiked along the rough track leading to the school, there were several patches of Red Hot Pokers displaying their beauty.

An unexpected pleasure was seeing that the local community had built a kitchen next to the school for preparing lunch for the students.  While building the classrooms, we had experienced some problems with community support, making us wonder at times how united we were on the project, so it was really encouraging to see this initiative of the parents for assisting the school. 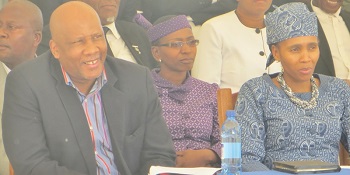 The principal of the school is Mrs. ‘Mathuso Mafa. We are thankful her health has improved and she is back from medical leave.  Mrs. Mafa has been teaching at Bolahla for 32 years and has long dreamed of having proper classrooms for her students.  Although the school suffered a severe loss with the recent death of a teacher who was of great help in the building project, we were pleased to see that new staff have been recruited.  The four teachers share the teaching of the seven grades, including the first graders shown here.

The months of February and March are the time of year when the Lesotho Evangelical Church in Southern Africa (LECSA) presbyteries hold their annual meetings.  These meetings are attended by delegates from each parish in the presbytery and run from Wednesday through Saturday, culminating in an outdoor service at the hosting parish on Sunday.  This year the Morija Presbytery met just a few miles down the road from Morija at the Matsieng Parish.  Matsieng happens to be where Lesotho’s Royal Family resides.  So the Sunday service was blessed with the attendance of Their Royal Majesties King Letsie III and Queen ‘Masenate.  Although the Royal Family are members of the Catholic church, the connection of the LECSA with them remains strong and dates back to 1833 when King Letsie III’s ancestor, King Moshoeshoe I, invited and welcomed the French Protestant missionaries who established the mission church which eventually became the LECSA. 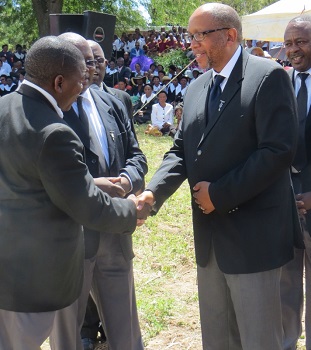 The King’s brother, Prince Seeiso Bereng Seeiso, in particular, has a strong affinity for the LECSA’s men’s fellowship group Banna le Bahlankana.  At special LECSA events when he is in attendance, Prince Seeiso often leads hymn singing and shares a personal message from the Word of God.  During the presbytery worship service, he received a membership pin from them in recognition of his support.

The joyful worship of the LECSA is always one of the things I share with churches back in the States.  This joy was evident and contagious once again at the Matsieng service, especially during the offering as group after group came forward with their gifts of thanksgiving.

Moving back to the elections, the role of the Christian Council of Lesotho, of which the LECSA is a member, cannot be overlooked in gaining commitments from the political parties to hold a free, fair and peaceful election.  Special prayer services and events were held to ask for God’s help in seeing this come to pass.  Unlike fifty years ago when churches in Lesotho helped to create political divisions, the churches in Lesotho have worked hard for peace and unity.  By bonding together they have made an impact.  Peace doesn’t come by itself; it takes effort!  As the Psalmist says, “…seek peace and pursue it.” (34:14).

Mark Behle serves with the Lesotho Evangelical Church. He is working to identify development projects, assist the church in preparing project proposals and coordinating project implementation. His appointment is made possible by your gifts to Disciples' Mission Fund, Our Churches Wider Mission, and your special gifts.