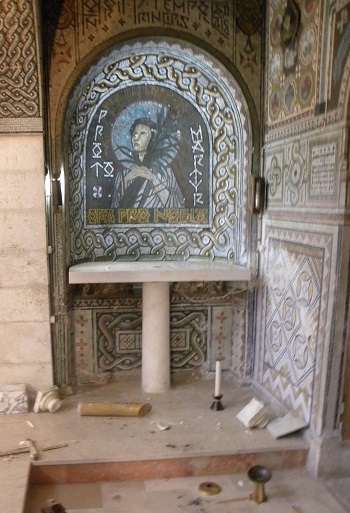 On the afternoon of September 19th, the eve of Rosh Hashanah, St. Stephens Church was vandalized. Father Martinelli said  they must have come in through the small side gate during a visit of a Russian pilgrim group . They entered past the beautiful 4th century mosaics and went straight to the altar and side chapels and knocked over and broke statues and crosses.

When we arrived over a week later to pay our respects, to be in “solidarity” as Father Martinelli put it, the crime scene was still intact as they were waiting for more people to come and investigate. While taking in the horror of seeing a sacred site vandalized, Father Martinelli asked us to look up at the stained glass windows and tell him what we saw, their faces had been shattered. The vandals had a purpose and time to knock out all the symbols of “idol worship” including the faces of Jesus and his followers and of course the statute of his mother, Mary.

The small church is painted to look like the original mosaics depicting the life of St. Stephan whose tomb is said to be here along with Nicodemus. Rabban Gamiel, the president of the Sanhedrin and teacher of St. Paul, is also said to be buried here and explains why the Salesian Monastery is called Beit Gamel. It could also explain why most believe these are the acts of Orthodox extremists from nearby Bet Shemesh.

This is the third attack on the monastery in the past five years. One was a fire bomb attack at the door of the convent which also included spray-painted hateful slogans. Just 18 months ago, grave stones were destroyed if they showed a cross. 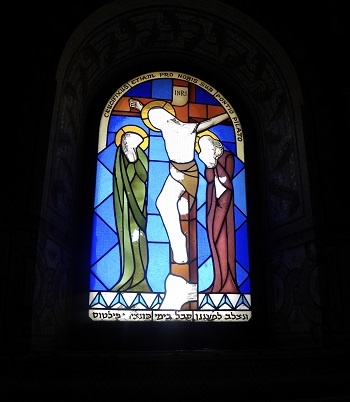 According to the watchdog organization Tag Meir who tracks hate crimes there have been over 53 investigations opened into arson and vandalism against Christian and Muslim sites. 45 of these investigations were closed with only 9 indictments and 7 convictions. One of the arson attacks was at the Church of Loaves and Fishes in Tabgha on Lake Kinneret (Sea of Galilee). An extremist settler organization, the same one that attacked a Palestinian family Douma, was actually charged. It took years to bring forth a conviction. The burnt church was left open for a few years. When you visited the site you could still smell the smoke.

One of my Jewish colleagues wrote and suggested I write about all these attacks against Christians. He called it “Christianaphobia. “I thought this was a little extreme until my “solidarity visit” to the Beit Jamal, while waiting for the bus in front of Tantur Ecumenical Institute, I was called some kind of racial slur in Hebrew which included the word Christian. My fellow clergy have been spit upon in the Old City but this was the first time I was verbally attacked.

So next time, dear ones, when you ask me if I am safe or afraid living here, the answer is yes I am safe in my Arab Muslim community, but I feel less confident on the streets and in the places I might go to worship.