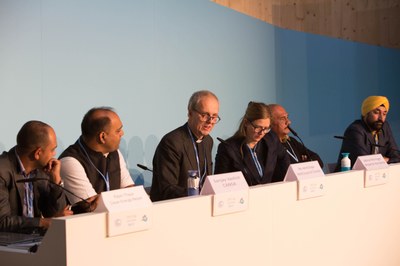 "A 2-degree Celsius increase in temperature will still mean the disappearance of our islands and homes, and consequently the death of our identity, language and culture," said Rev. Tafue Lusama, general secretary of the Tuvalu Christian Church, speaking at a side event organised by the World Council of Churches, Bread for the World, ActionAid, and Climate Action Now-South Asia at the 23rd Conference of Parties (COP 23) of the United Nations Framework Convention on Climate Change (UNFCCC). COP 23 is currently underway in Bonn, Germany from 6-17 November.

According to the 5th Assessment Report of the UN Intergovernmental Panel on Climate Change, a 2-degree Celsius rise in temperature above pre-industrial levels carries with it an increased risk of sea level rise and extreme weather events such as powerful storms, floods, droughts, and heat waves, particularly affecting small islands, the tropics and the polar regions.

The landmark Paris Agreement obliges countries to keep global temperature rise to under 2 degrees Celsius to prevent catastrophic climate change. However, nationally determined contributions remain vastly insufficient to reach this target and the latest estimates indicate that the planet is well on track for at least a 3-degree Celsius rise in global temperatures, causing permanent and irreversible loss and damage.

The Paris Agreement supported the Warsaw International Mechanism for Loss and Damage which was established by the UNFCCC at COP 19 in Warsaw in 2013 to provide a platform for broadening our understanding of climate change impacts and exploring approaches to addressing loss and damage.

"The government of Tuvalu was already raising the issue of loss and damage as early as 1991," said Harjeet Singh, climate policy manager at ActionAid and one of the panelists at the side-event. "Because we have failed over the last decades to sufficiently mitigate and adapt to climate change, there is now an urgent need to address climate-induced displacement as well as to provide funds to compensate for the loss and damage."

While financial compensation is important for helping affected people and communities get back on their feet, it is not enough to truly remedy their suffering. "How can you value the loss of lives, lands, languages, and cultures in monetary terms?," asked Rev. Henrik Grape, who coordinates the WCC Working Group on Climate Change. Grape offered a moral and ethical perspective to the side-event topic.

"Clearly these have non-material, even spiritual dimensions. As churches and faith communities, we need to foster deeper discussions on non-economic loss and damage caused by climate change and how it can really be redressed. In such discussions we need to ensure in the first place that the voices of the most vulnerable are heard. And we need to stand in solidarity with them."

How can we practice solidarity? "Join us in our fight to keep global temperature increase to 1.5 degrees Celsius," said Lusama. "We do not want to become forced migrants, to lose our roots, to have no point of reference on the face of the planet. Therefore we need to act now."

The World Council of Churches also introduced and interfaith statement on climate change to a high-level plenary at COP23. You can read that here. Entitled "To Bonn and Beyond: Act Now with Justice and Peace", the statement was read by Frances Namoumou, representing the WCC and the Pacific Conference of Churches.