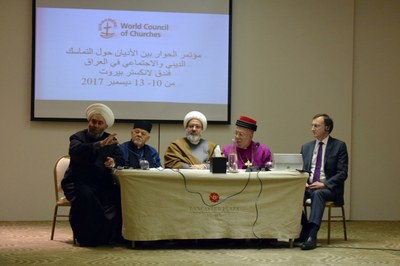 More than 40 religious leaders from Iraq gathered in Beirut, Lebanon under the auspices of the World Council of Churches for three days of constructive interfaith dialogue to identify and analyse opportunities and challenges related to cohesion and highlight the role of religious leaders in restoring inclusive multi-religious and multi-cultural communities in Iraq after years of conflict. The leaders, representing Iraq’s diverse religious and ethnic fabric, included representatives from the Shiaa, Sunni, Shabak, Sabean Mandaean, Yezidi, Kaka’i and Christian communities, for the first time in the recent history bringing together minority and mainline religious groups to share their vision and commit on working together for the future of the country.

The group met from 11-13 December and focused on the roles of four areas of society which have emerged as critical for advancing the national project of unity in Iraq and forming an inclusive and diverse community: education, religion, the constitution and legal frameworks for inclusive citizenship, and transitional justice.

While the conference was an opportunity to begin planning for the future, it was also a practice in acceptance of the other and collaboration among participants. “This dialogue strengthens trust among the religious and confessional leaders present, and enables us to interact positively,” said Shia leader Sheikh Dr Yousif Al-Nasery, secretary general of the Shura Religious Scholars. “It makes us closer to each other, which offers to our people in Iraq a beautiful example for coexistence and religious dialogue…When we meet and strengthen dialogue among us, we promote moderation and acceptance of others as well a recognition of mistakes — and these are necessary components to build an advanced civil state in Iraq.”

Dr Khaled al Mulla, prominent Sunni Muslim cleric of Baghdad, head of the Iraqi Scholars Association and member of the Iraqi National Alliance, confirmed in his address to the participants “we should not deny that some of the violent acts that we have witnessed in our country have their roots in religion and religious texts. We have to accept this fact first and then affirm our role as religious leaders in finding remedies to it. Promoting positive readings of our religious texts, imposing moderate religious discourse in our sermons, training the clerics on accepting diversity and inclusivity so that they can transfer this into the people, are essential for the Iraqi society in order to restore a community where every religious and ethnic component is recognized, lives in security, and contributes to the political, social and economic life of the country.

The leaders also discussed the reality on the ground for their communities and many stressed the need to move from the realm of words into action.

Waheed Mandoo Hammo, prime minister of the provisional government of Ezidikhan in Iraq and representative for the Yazidi community, saw the conference as a first step in a continuing process. He told of his community’s great suffering from the conflicts in Iraq during which people were violated and killed because of their faith and traditions.

He added that the consultation provided a space for an honest dialogue, sharing of pain, and expressing concerns and fears regarding the future.

His Eminence Archbishop Avak Assadourian, primate of the Armenian Diocese of Iraq and general secretary of the Council of Christian Church Leaders in Iraq, agreed. “We all know what the ailment is but nobody has come up with a remedy for those ailments,” he said. “Therefore, I would like to see a subsequent event where we have more time to work together in small groups, in order to take on the issues that were brought to this conference and come up with actions.”

During this week’s conference in Beirut, working groups were formed around the four themes mentioned above in order to lay the basis for such future action and promote a shared narrative for peace and reconciliation in the country. The final statement of the conference calls for continuing dialogue among the group, to be accompanied by the development of the proposed strategic action plan, and corresponding activities with partners to address the challenges identified and prioritized by participants.