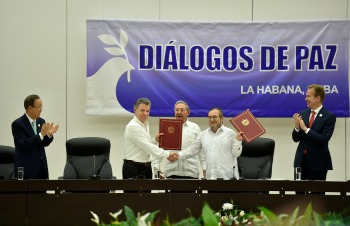 In a statement adopted by its Central Committee meeting in Trondheim, Norway, the World Council of Churches (WCC) “welcomes the news of the historic bilateral ceasefire agreement concluded by the government of Colombia and the Revolutionary Armed Forces of Colombia (FARC-EP) in Havana on 23 June 2016.”

The agreement is expected to be signed at a formal ceremony within the coming month.

During a visit to South America in September 2015, WCC general secretary Rev. Dr Olav FykseTveit and partners from member churches met with Colombian president Juan Manuel Santos to discuss the peace talks aimed at achieving a ceasefire, and how churches and their partners might accompany the subsequent process of approval, implementation and verification of compliance.

The Central Committee also “invites consideration of a post-agreement ecumenical delegation visit to Colombia, and of holding a forthcoming meeting of the WCC central committee or executive committee in Colombia to demonstrate that accompaniment.”