We are First Africans and then South Africans

In Alexandra, a township near Johannesburg, South Africa, Mr Emmanuel Sithole, an African foreigner, pleaded for his life.  He is a Mozambican who was the latest victim of xenophobic attacks in South Africa.  Mr Sithole was stabbed several times, taken to hospital by the journalist team who witnessed the attack and later died in hospital.  The accused caught on camera were charged in court with murder.

In another incident, African foreign shop owners were locked in their shop and set on fire.

African foreign nationals have been targeted over the last several weeks; many of their shops have been looted and they have been verbally threatened to close their shops and go back where they came from.

Most of the African foreigners living in South Africa are from Somalia, Zimbabwe, Malawi, the Democratic Republic of the Congo and Nigeria. 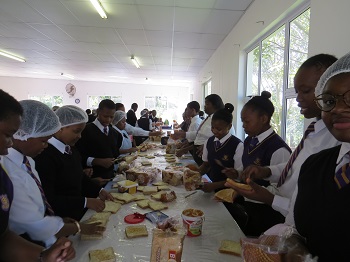 It is difficult to grasp the cause of such evil and hatred.  What one looks for is the counter response that stands against suffering, hatred and injustice.  A teacher at Inanda Seminary reported that in her township, local South Africans formed a human chain in front of a foreign owned shop to protect it.  Another staff member reported that in his area of the township, the foreign owned shops are closed, but no one has harmed the owner or the shop.

At Inanda Seminary, grade 11 history students stood up and firmly spoke out against xenophobia.  “We are first African and second South Africans.”  Within life orientation (life skills) classes, students discussed their personal thoughts on the human rights abuses and the ramifications of xenophobia for the country and for themselves.

The Inanda Seminary students wanted to show their support of the thousands who have been displaced by putting their words into action.  The local Red Cross has been sheltering the displaced African foreign nationals, so they were contacted to learn how the students could help.  The greatest need presently is feeding thousands of people at different tented sites.  The students formed several assembly lines and made peanut butter sandwiches for one of the many camps.

Scripture reminds us that we are all God's children and that we are called to particularly look out for the widow, orphan and foreigner amongst us.

17 For the Lord your God is God of gods and Lord of lords, the great God, mighty and awesome, who is not partial and takes no bribe, 18 who executes justice for the orphan and the widow, and who loves the strangers, providing them food and clothing. 19 You shall also love the stranger, for you were strangers in the land of Egypt.  Deuteronomy 10: 17-19

Rev. Susan Valiquette serves as Chaplain and Life Orientation Teacher at Inanda Seminary in Durban, South Africa.  Her appointment is made possible by your support of Our Church's Wider Mission, Disciples' Mission Fund, and your special gifts.