We Continue to Learn and Grow 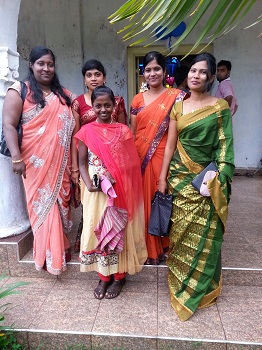 We are Andy Jepson and Lindley Kinerk from central New Hampshire volunteering in Sri Lanka for what we hope will be two full years.  Andy is a retired UCC pastor and Lindley is also retired, a math teacher.  We arrived in Sri Lanka in October to work with the CACM (Church of the American Ceylon Mission), a Christian church working among the Tamil population.  We found that the relationship between this church and the American missionaries is a long, close one dating from way back in 1816.  Over the years the partnership between the Americans and the Sri Lankans has been one of mutual respect and sharing of responsibilities and faith.

When we arrived we had no idea of what we would be doing nor, it seems, did our hosts. There was a small program in progress at the Christian Theological Seminary for women who are interested in becoming leaders in the church, so they plugged us in there for the time being.  This is a bold new frontier for people here.  When Andy arrived her presence doubled the number of female ordained pastors of the church to two - a new frontier indeed!  Andy did what she loves, she taught theology classes to the women.  It was a dual lesson in theology and, by necessity, in English.  While we were there a handful of young men, 18 to 22 years old, also came to the seminary with a goal of studying English in preparation for retaking their ‘A’ level English exams in December.  They took lessons nearby at a for-profit program during the day and met with Lindley from 8 to 9 every evening. People view knowing English as very important to a successful future.  Around every corner can be seen a school or program 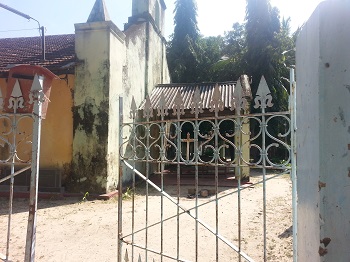 This assignment was great fun and kept us out of trouble for six weeks.  When that session was finished we were sent to Batticaloa, a noisy, crowded busy city (can you tell we’re country folks?) which is the headquarters for the CACM programming. There were programs galore that the church was administering to help the war-ravaged Tamil population, Christian and non-Christian alike.  A boys’ home, a girls’ home, several fine preschools, a vocational college, leadership programs, an afterschool program, to name a few.  The office is also busy with emergency assistance for crises such as flooding.  We visited all of these programs, but when we were eventually asked what called us, we ‘fessed up that it was the very remote northern part of the country we had visited early in October.  Lock, stock and barrel and with a stray pup in tow, we came way north to Karainagar, once an island accessible by boat but now joined to the mainland by a causeway.

This area was emptied and bombed during the war when Tamil militants fought for equal rights from the government.  Families were broken; homes and businesses lost, people relocated, 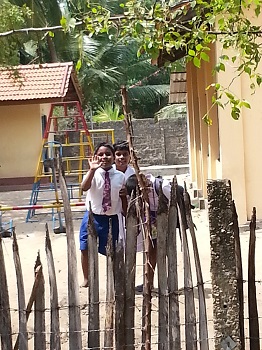 civilians injured by bombs and landmines like our friend below, and all were emotionally scarred by the sheer terror of war.

Fishing is by far the main industry, if you can call it an industry.  Individuals have nets stretched out in the shallow waters which they tend early mornings and late evenings.  Some have built small huts on stilts so that they can sleep at night above the water and tend their nets early in the morning before they go home.  Shrimp is the dominant catch and, oh my, what sweet shrimp it is.  Never, never in our lives have we eaten such delicate lovely shrimp as these fresh from the ocean only hours before.  Sorry, Market Basket.

An after-school program serves the children of the poorest of the poor families on the island in a village called Oori or Uri or Uree.  Spelling in the English alphabet obviously varies since it is merely a transliteration from the beautiful Tamil script.  There are about 120 children with ten teachers to provide supplementary educational classes five afternoons a week for grades 1 to 11.  In addition a preschool program operates in the morning.  Lindley is teaching English to 9th, 10th and 11th graders.  The physical set-up for the class is less than ideal.  There are two connected rooms with walls of chicken wire which house grades 8- 11.  The noise is incredible and I struggle with how to teach when normal conversation is difficult.  The children in the program are both Christian and Hindu.  This inclusiveness and respect for different religions is one of the things we very much admire about the culture.  We are constantly reminded that there are many paths to God but only one way to love each other. 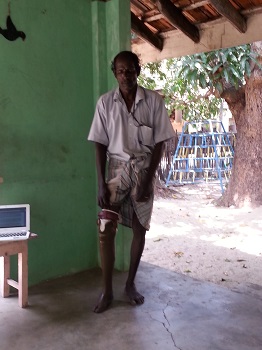 Andy is the pastor of the church in this village.  It was built in 1855 and still stands strong though in need of maintenance. The previous pastor will stay on till June to teach her the ropes and to help with translation.  Sermons must be half as long since they are said twice, first in English and then in Tamil.  But Andy has always loved preaching sermons and does a great job.  She brings her American style of preaching to this culture and has created interest.  Yesterday evening, a neighbor came to ask for more information about the sermon she just offered on the topic of violence.  The woman was to give a talk at her workplace and knew that violence against women was an issue among her colleagues. She used Andy’s sermon as a starter.  Today she reported that her talk was very very well received and her colleagues continued the conversation afterwards.

We are living in the parsonage which is not 20 feet from the church.  It’s a nice property set between the local primary school and a Hindu temple.  Good neighbors - and always something going on.  The local well is right out our back door, so we have a steady stream of visitors every day from before dawn until after dusk. Incidentally, since we are only 90 north of the equator, we’ll be “well-visited” at about 6am and 6pm year round.  The mosquitoes know exactly how to tell time and show up starving, punctually at 6 pm.

We are still so new here that we cannot in any way pretend to understand the depth of need or where our ministry will take us. We teach, we preach, we visit schools and homes, we ask questions, we make friends, and we explore the area.  Every day we become a bit more familiar with our neighbors and neighborhood.  Small children call “Hi, Andy.  How are you?”  or “Hi Lindley Miss.”  If they call out in Tamil we answer in Tamil.  If they call out in English we answer in English and if they say good morning at 7 o’clock at night we say good morning back. We expect that we will continue to learn and to grow and to give what we can.  We never forget to count our blessings.

Andy Jepson and Lindley Kinerk serve as long-term volunteers with the Church of American Ceylon Mission.  Andy provides chaplain services and Lindley serves as a teacher at the Christian Theological Seminary and Jaffna College. Her appointment is made possible by your gifts to Disciples Mission Fund, Our Churches Wider Mission, and your special gifts.