Dr. Suh was born in Kanggye, Korea, near the border with China, in 1931 under Japanese occupation. In his childhood he was forced to speak Japanese and even change his Korean surname. 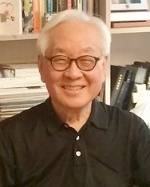 Despite continuous harassment, his father, a pastor, never stopped teaching the Gospel. Following the war, his father became a well-known Christian leader in the northern-zone. When the Korean war broke out, David’s family moved to Pyongyang. After his father’s murder at the hands of his countrymen, David moved South and joined the Navy, hoping to one day avenge his father’s death.

A final peace treaty has never been reached to bring closure to the Korean War, despite the end of the Cold War and 60 years of ceasefire. The Korean land and people remain divided, despite official support for reunification by North Korea, South Korea, and the U.S.

Dr. David Suh received his Ph.D. in Religion from Vanderbilt University, and served as a dean and professor at Ewha Women’s University in Seoul, South Korea. He is an ordained pastor in the Presbyterian Church in Korea (PCK), the former President of the World Alliance of YMCA’s, and the former Vice President of the United Board of Christian Higher Education in Asia. Dr. Suh is currently retired and lives in Seoul, South Korea where he encourages a new generation to seek peace.