Water Projects in the Democratic Republic of Congo

The Community of Disciples of Christ in Congo (CDCC) was founded over 100 years ago in what today is the Democratic Republic of Congo (DRC).  The church has been affiliated with the Christian Church (Disciples of Christ) since 1899 and now relates closely to Global Ministries.

The communities where CDCC congregations are located are confronted with many socio-economic problems. They are all struggling from the effects of a civil war that included the involvement of surrounding countries as well as broader international involvement. Health care, education and development programs suffered greatly during the war and during years of systemic corruption before the war. One of the devastating effects of the war has been the rapid increase in the number of HIV/AIDS patients, particularly in the Equator with more than seven million inhabitants, and where the largest numbers of Disciples are located.

A key barrier to improving community health and development is the scarcity of accessible potable water.  To confront this situation, the CDCC welcomes support for a series of water projects that they have prioritized.

Two of the first water projects are being carried out in Mbandaka.  The assessment of water needs in Lotumbe was carried out with input from the local community leaders as well as the Lucy Otaenga Foundation (FLO) is a private, non-governmental organization in Lotumbe.  Lotumbe’s inhabitants make their living by hunting, farming, or fishing in the Momboyo River, and most are deeply impoverished. Almost none of the population has access to clean drinking water.   Lotumbe also is home to a CDCC-affiliated hospital.

After a recent trip to the Democratic Republic of Congo in August 2012, Reverend Sandra Gourdet, Area Executive for Africa, reported that two wells have been completed in the Lotumbe area.   Where once people waited in a line that would stretch more than an eighth of a mile to get water, they now report that the lines are much shorter taking much less time to get water.  They also reported that they no longer had to get up at 4:00 a.m. in order to get in line to get the water, allowing more time to do other things such as work and school.

One of the new wells serves a previously unsettled area that has seen an influx of displaced people in the last years.  These displaced families have constructed homes in this area and have formed a church.  They, however, had to go many miles to get potable water.  One of the new wells has been located near the area and the community is able to get their water nearby.  This community is now flourishing.

The CDCC continues to receive requests for assistance in establishing wells in other areas.  The need is great and several new water projects in various districts in the Equatorial Region of the Democratic Republic of Congo are planned.

Water Wells at Mbandaka I 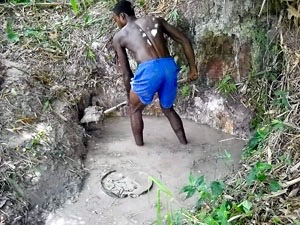 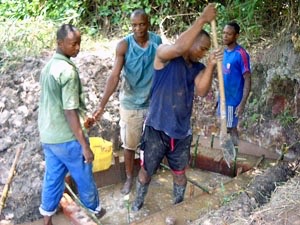 Water Wells at Bondjondjo near Mbandaka 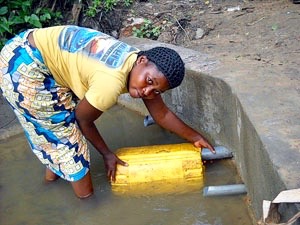 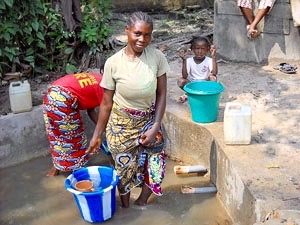 The Community of the Disciples of Christ in the Congo has progressed recently into the next chapter in their ministry of bringing water to thirsty communities. While there has been great success in the creation of protected streams, these projects were not viable for many of the communities that the CDCC was hoping to serve.

This next phase, with support from Global Ministries, Week of Compassion and Disciples4Water (a mission group out of First Christian Church, Edmond Oklahoma), will allow the CDCC to use largely locally available materials to construct wells that can be repaired and maintained by the CDCC itself over the long term. Not only does this decrease the cost of bringing water to communities to roughly $1,000 per well (or an average of $2 per person), it also creates new work opportunities for community members with jobs that support sustainable development.

With specially-made digging bits, a simple pulley is used to raise and drop the bit to efficiently dig wells in communities without streams. A well-digging training was attended by a member of the CDCC project office in October 2013, and, being impressed with the possibilities this method holds for Congo’s Equator Province, the CDCC has identified additional members to receive the training, which is scheduled for October 2014.

The CDCC has set an ambitious goal of digging 20 new wells and, with your support, this vital resource will be made much more widely available throughout the Congo.

Learn more ways that funds are raised for this project here and here.

Last year, the CDCC set a goal to build 20 wells in one year.  Global Ministries is excited to share that so far 20 wells have been drilled and had pumps installed in the Mbandaka and Bolenge areas by a group of individuals from the CDCC known as “the drill team”.  The drill team will continue to provide wells in these areas which have a population of approximately 800,000 individuals, with many areas are still without a functioning water supply system.  In addition to the installation of these 20 wells, a canoe, an outboard motor, and several bicycles have been purchased for the team to travel through the rainforest and along the Congo River to install water wells throughout the Equator Province.

In 2016, the CDCC has set a new goal to build 30 wells, in partnership with Global Ministries and Disciples4Water.  Areas near schools, hospitals, and homes will be the priority sites for the CDCC to construct these water wells throughout the year.  The CDCC has made plans for the drill team to install wells in the Bosobele district where wells will be installed in Bosobele, Bomongo, Mokolo-Mpombo, Mdjombo, and Bokoko parishes, as well at Bosobele hospital.  The 2016 plan also includes for the drill team to travel on the Tshuapa River, where wells will be installed in Boende, Solongo, Bosombo, Bondjale, Lofoy, and Wema. 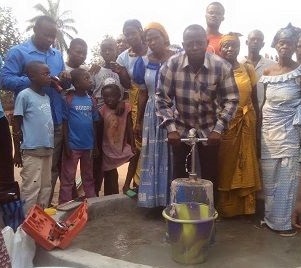 The Community of Disciples of Christ in Congo (CDCC) has been expanding the reach of their water well drilling team, a group specializing in the drilling and maintenance of wells for neighborhoods in desperate need of sanitary water sources. From July 2016 to July 2017, the CDCC Drill Team drilled 16 wells in different sections of Mbandaka, providing wells of drinkable water that will benefit a population of 6,400 people. A city of over 700,000 residents, Mbandaka is located less than three miles north of the Equator and the climate is considered a rainforest, prone to humid heat all year round.

As news about the CDCC’s well-drilling spread across Mbandaka, many of the residents in the affected areas actively aided the well-drilling effort. Local individuals and families graciously offered to host drill workers in their homes and provide food for the team. Others gave of their time and assisted in the delivery of sand and bricks to the drilling site. These displays of kindness and community cooperation show the eagerness of townspeople to contribute to a better future for their city and their appreciation for those who have lent much effort to improving Mbandaka’s standard of living. 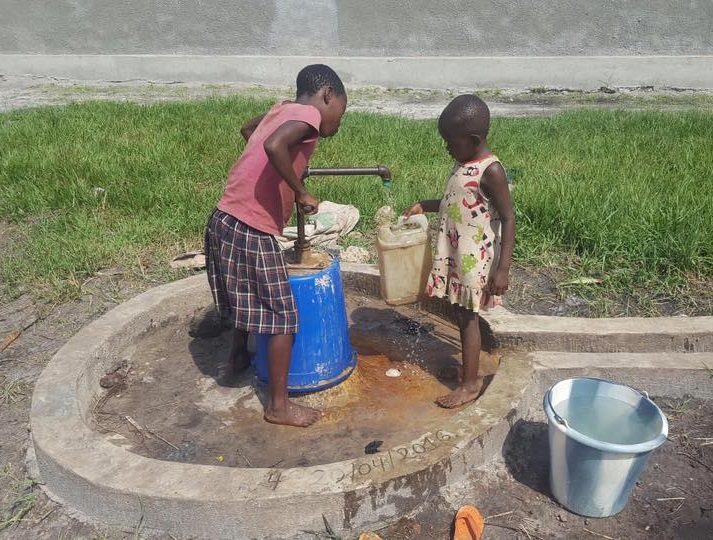 The CDCC plans to drill 12 more wells by the end of October of this year. Ten of the wells will be drilled outside of Mbandaka in the area of Boende. Until now, the drill team’s efforts had been focused solely in Mbandaka, but as word of the project’s success spreads, many areas outside of Mbandaka have expressed interest in participating in well-drilling projects. Global Ministries continues to welcome gifts designated for the CDCC clean water projects.