What’s On My Mind This Election Year… 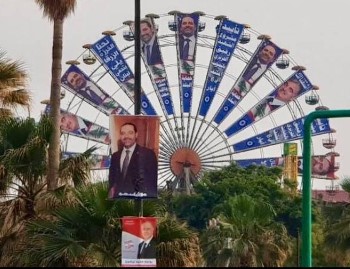 Shortly after I arrived in Lebanon in 2016, General Michel Aoun was elected President by the Lebanese Parliament. This following a two-and-a-half-year period with no head-of-state, when the Lebanese government struggled to maintain basic services, such as trash pick-up and electricity services.

Fast forward to today and the trash is being collected (we still live with daily power cuts) but Lebanon’s systemic issues remain unsolved (all that trash is being dumped in the sea or added to two landfills which are far over capacity). Despite the election of President Aoun and the first parliamentary elections in nine years being held earlier in 2018, there is a pervasive sense here that nothing will really change. That was evident when the same politicians who have held power for decades again won their seats despite a repeated failure to provide the Lebanese people with the infrastructure improvements, economic opportunities and civil rights they are calling for.

All of this backgrounder to say that in this election year, I am thinking a lot about the power of my vote. Many of Lebanon’s challenges to achieve change are based on systemic barriers to it (which also serves to preserve stability). Their highly pluralistic power structure means that no one group can usurp power, but it also means that everyone has to agree before change happens. And, their Parliamentary representation is based on a quota system which gives each legal religion a certain number of seats. Therefore, when it comes down to it, politicians and candidates are more accountable to their religious community and their backers than a set of particular policies or the common interest of Lebanon as a whole.

We are fortunate that the United States has political systems which allow us to hold politicians reasonably accountable to the agenda and values they’re elected to pursue and uphold. The number of recent popular upsets of established politicians tells us that our vote still holds power. I, for one, am determined to keep it that way.

And, I know I’m not alone. It has been so motivating to see so many of you and the Disciples of Christ and United Church of Christ on the forefront of reclaiming space for Christians (and people in general) who want to see justice, compassion, plurality, equity, peace and radical hospitality as the building blocks of our society. I am excited to be home and rejoin the movement — not only to vote, but to be vocal and active every day. To live in the spirit of St. Teresa of Ávila’s famous poem which reminds us that we are now God’s hands in the world and that we it is up to us to undertake this important work.

Updates from the Middle East Council of Churches (MECC)

Since the appointment of Dr. Souraya Bechealany as Acting Secretary General in January, we have been going full steam ahead, building upon the foundations laid by Secretary General Emeritus, Fr. Dr. Michel Jalakh. A couple big projects are now underway that we’re very excited about:

Restoration of the MECC Archives

Due to war and political crises in Lebanon during the mid-2000s, the meticulous organization of the MECC Archives was lost in a rush to box everything up and move it to a safe location. It sat in storage for a number of years until April 2018, when MECC began the long process of restoration and digitization. In the coming years, the MECC Archives will be preserved, reorganized and made available online to churches, scholars, theologians and the public. Watch our videos of this journey at: www.mecc.org/archives.

The Taizé Community, the Churches in Lebanon and the Middle East Council of Churches are planning a major ecumenical youth event for March 2019. The event will bring together 800 Lebanese youth with 500 youth from Europe and 300 youth from across the Middle East for a week of communion in Lebanon. You can follow the progress of this event and get updates about registration on Facebook: www.facebook.com/TaizeLebanon2019.

This project aims to increase resiliency among Iraqi clergy and subsequently in their parishes and congregations. Participating clergy will first engage in a seminar to address their own trauma, learning methods for managing stress and advancing trauma healing for themselves. They will also participate in trainings to learn how to facilitate trauma healing activities in their home parishes and congregations, thus extending the program’s impact in order to support the Iraqi Christian Community in their process of rebuilding after many years of instability and conflict.

In August, I am returning to the United States after almost five years abroad to begin a graduate program at the School of International and Public Affairs (SIPA) at Columbia University in New York. I’m pumped about starting this program (Masters in Public Administration - Development Practice) and also deeply saddened to leave all my friends and colleagues here. Both tears of joy and tears of sorrow will surely be shed. My gratitude to everyone for your support and prayers during these past transformative and challenging five years!

Bethany Waggoner serves with the Middle East Council of Churches in Lebanon. Her appointment is made possible by your gifts to Disciples Mission Fund, Our Church’s Wider Mission, WOC, OGHS, and your special gifts.