Who’s going to pick the Fruit and Vegetables? 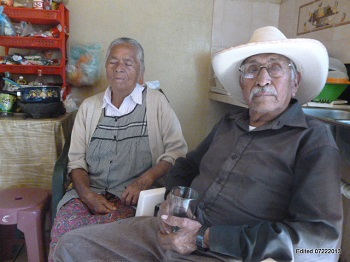 “There is a definite need for a source of imported labor during the harvest peaks.”

Since the boom in productivity of U.S. agriculture over one hundred years ago, who will cultivate the fields and pick the fruit and vegetables has remained a challenging question.  Until the Chinese Exclusion Act of the early 1920’s the Chinese migrants led the way.  Japanese and Mexican immigrants took their place until the outbreak of WW II when an agreement between the U.S. and Mexican governments created the “bracero program.” 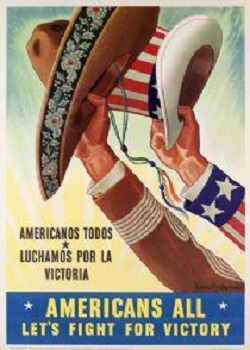 The fact that Mexican and Mexican-American workers are counted on by U.S. fruit and vegetable farmers today is in large part due to the bracero program.   Between 1942 and 1964 4.5 million Mexicans signed contracts to work for a limited time in fields in the U.S. During WWII, Mexican “braceros” (from the Spanish “brazos” for arms) were, in the words of President Roosevelt, “contributing with their skill and their labor to the production of vitally needed food”.   Today, farm workers in California’s San Joaquin Valley, sometimes called the “breadbasket for the world”, are almost entirely Mexican and Mexican-American.

Providing labor for U.S. farmers when most needed and helping the worker to return home to Mexico was the design of the “bracero” program.  It took advantage of the low wages paid on the other side of the U.S.-Mexico border, the longest border in the world between a rich nation and a poor nation.

We talked recently with a former “bracero” who returned to the U.S. eleven or twelve times between 1952 and 1963.  Candelario Espino Rodriguez, the 86 year old father of San Luis Potosi Disciples pastor Rogelio Espino Flores welcomed us to his adobe home on a large lot in Ojo Caliente, Zacatecas. It is the same home he left for three month contracts to work for cotton farmers in Texas and to pick tomatoes in the Imperial Valley of California.  The only complaint he shared with us was that the last meal of the day was served at 4:30 pm. (rather than the traditional hour of 9 pm or later for the Mexican “cena”) Our friend Rogelio says his father never mentioned the “bracero” experience except to counsel his children never to head “to the other side” in search of higher pay. 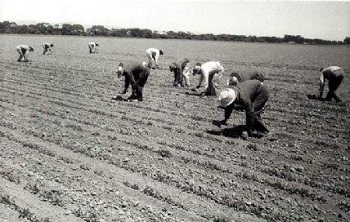 Several developments led to repeal of the law governing the “bracero” program in 1964.  Some horrific accidents involving “braceros” drew attention to widespread mistreatment of the mostly non-English speaking Mexican workers, including frequent disputes over pay and discrimination within some of the farming communities.  From its founding in 1962, the United Farmworkers Union led by Cesar Chavez and Dolores Huerta opposed the importing of labor from Mexico.  In the view of UFW leaders, contracted labor from Mexico kept farmworker wages below the U.S. poverty level and made the worker more vulnerable to inhumane work conditions.

Some of the UFW’s early members first entered the U.S. as “braceros” and now can boast of children with a PhD.  Their stories and those of other “ex-braceros” were collected by the Smithsonian’s “Bracero Archive Project”.  They resemble stories of immigrants from other lands with a distinctive and very important twist: their former homeland lies a short trip away, across a border that changed eight times in the first hundred years of the U.S. as a nation.  How these Mexican immigrants shaped a new identity is one of the fascinating sides of the stories told by these elders whose descendants will make up the largest ethnic group in California and other U.S. states by the middle of this century.  Here are two of the captivating stories that can be found at the web site http://braceroarchive.org/ 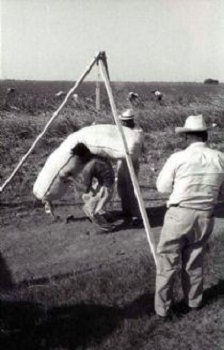 MY PAPA CAME TO THE US AS A BRACERO IN THE EARLY 1940′S FROM A SMALL VILLAGE IN MICHOCHAN, MEXICO…HE WAS AN ORPHAN AND BEGAN WORKING AS A YOUNG BOY IN MEXICO…HIS AUNT RAISED HIM…HE ONLY HAD A 3RD GRADE EDUCATION…BUT HE COULD READ AND WRITE…WHEN HE WAS A YOUNG MAN…THE VILLAGE HAD BEEN BULLETED WITH FLIERS ABOUT WORK IN THE US…HE TOLD HIS AUNT HE WAS GOING TO FIND OUT …HE NEVER RETURNED HOME. THEY SAW A STRONG YOUNG MAN AND BOARDED HIM ON THE TRAIN WITH OTHERS AND HE BEGAN WORKING IN THE FIELDS OF SO. MONTEREY COUNTY. HE TOILED IN THE FIELDS WITH NO WATER, LITTLE FOOD AND OFTEN FILLED WITH MAGGETS…HE TOLD THE WORKERS NOT TO EAT THE FOOD…HE BECAME AN ADVOCATE FOR DECENT HUMAN CONDITIONS FOR THE BRACEROS…WHAT LITTLE MONEY HE MADE SENT IT BACK TO MEXICO. IN THE LATE 1940′S HE SETTLED IN SAN JUAN BAUTISTA, CA…HE WORKED AS COOK IN BOARDING HOUSE FOR BRACEROS BY NOW AND MET HIS WIFE, CARMEN MURO…THEY WOULD HAVE 8 CHILDREN…MANY OF HAVE RECEIVED A COLLEGE DEGREE, ONE A MASTER’S DEGREE…AND IN 2008 HE PASSED AWAY AT THE AGE OF 95…STILL ABLE TO TELL HIS STORIES OF HIS JOURNEY INTO THE US. AT THE AGE OF 82 YEARS OLD HE BECAME A US CITIZEN…REALIZING HE NEVER GOING TO RETURN HOME TO MEXICO.

It was not until 1953, at age 19; he finally entered the Bracero Program. Assigned to work in Arizona, his hard labor paid off. He found favor with his employers. Out of 160 braceros, 3 were chosen as supervisors to apply for legal residency. Their application fees were fully paid by his employer. They were the lucky ones. The less fortunate braceros were subjected to racism, segregation, physical abuse, and sometimes death.

This bracero is my father. He married in 1968 and migrated to the beautiful Salinas Valley, where he continued his work in farm labor and still takes pride in being a busy, hardworking man. In 2002, 49 years later after entering this country, my father became a US Citizen! I was so proud of him.

Today, he sits and watches how the country which once desperately needed him, at times still continues to despise and mistreat Mexican laborers.

The Smithsonian’s Bracero History Archive and its article “Bittersweet Harvest: the Bracero Program 1942-1964” were primary resources in writing this.

Doug Smith and Kate Moyer serve as Long-term Volunteers with the Joint Table for Mission Development formed by the Christian Congregational Churches of Mexico, the Christian Church (DOC), and the Fraternity of Evangelical Christian Churches (DOC) of Mexico. Doug and Kate serve as Consultants for Mission Development. Doug serves with the emphasis in stewardship and resource development.  Kate serves with the emphasis on women’s development and theological education. Their appointment is made possible by your gifts to Disciples' Mission Fund, Our Churches Wider Mission, and your special gifts.