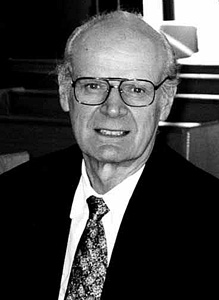 William “Bill” George Kroehler died on Saturday, September 26, 2015 at his home in Claremont. He was 84. He was born on February 7, 1931 in St. Louis, Missouri to Arthur and Clara Kroehler, the fourth of five children. His siblings included younger sister, Ruth, older brother, Armin and older sister, Lois, and an older sister, Eleanore, who died when she was eight.

Bill came from a large extended family that included many pastors and missionaries.  His father, Arthur, was a pastor in Belleville, Illinois, a job he followed with posts at churches in Fort Collins, Colorado, Lyman, Nebraska and Hardin, Montana where Bill graduated from high school. He played basketball and football in high school, and continued to do so while attending Rocky Mountain College in Billings, Montana. He met his future wife LaVerne at the Billings Montana Church of the Air, where he was part of a quartet for a radio broadcast.

Upon graduating with a degree in English and a minor in philosophy, Mr. Kroehler served for two years in the US Army. After basic training, he was stationed at Fort Hollibird in Baltimore.  He married LaVerne during a furlough on April 30, 1954. Mr. Kroehler had a musical family and regularly joined his sisters and brothers in song over the years as his voice evolved from a fine tenor to a rich bass. His marriage was seen as having a practical side, his wife shares, with the family declaring, “Oh, good. We’ve got an alto.” After the Kroehlers’ honeymoon in Colorado, Bill left for Camp Kobe in Japan. His wife joined him seven months later.  After returning to the United States, Mr. Kroehler got his teaching certificate and their daughter, Jody, was born on October 4, 1955. They lived in Scobey, Montana for two years, where Mr. Kroehler taught English and social studies. He was also the librarian, junior high basketball coach and high school basketball referee. During their time in Scobey, Bill and LaVerne also lent their voices to the choir at the local Methodist church.

In 1957 the couple moved to Nashville, Tennessee where Bill got his master’s degree in foreign missions at Scarritt College for Christian Workers and their son, Ty, was born. Two years later, the Kroehlers left for Japan where for 42 years they served as missionaries with the United Church of Christ. After two years attending language school, Mr. Kroehler began teaching at the Disciples of Christ-affiliated Seigakuin Boys’ School.  Bill’s brother and sister-in-law, Armin and Evelyn Kroehler, were also missionaries in Japan along with Evelyn’s parents, Gilbert and Cornelia Schroer. The three families had summer cabins in northern Japan at the missionary community of Takayama where they vacationed and the cousins Ken, Kaye, Jody, Ty, Iris, Margaret and Christopher were able to be together.

Mr. Kroehler spent his time building sand structures, playing chess with Armin and working for the community in various roles. In 1967, he began teaching at Joshi-Seigakuin Junior College, a women’s School, located north of Tokyo in Ageo. Two years later, at age 40, Mr. Kroehler became president of the college.  Bill always enjoyed a good gadget and with the acquisition of an early Macintosh acquired the nickname “kon kichi,” which means crazy for computers.

After 23 years as president of Joshi-Seigakuin and head of the affiliated kindergarten, he retired from that position and became head of the International Center, working with exchange programs for students going to the United States and other Asian countries as well as Australia and England. Billwas instrumental in establishing Seigakuin International School (SAINTS), a Japanese bilingual school,in Atlanta, Georgia. He was also active with the ICYE, International Christian Youth Exchange.

Mr. Kroehler was passionate about physical and mental health, education and working with people. He always saw possibilities for problem-solving for the good of all. At a time when many colleges in Japan were reluctant to admit students with special needs, he accepted them, making changes in campus facilities as they went along, helping them to succeed.

If there was a possibility that he could do a job, Mr. Kroehler accepted the challenge, sometimes to the consternation of his colleagues. He drove the kindergarten bus, pulled weeds and cleaned up. He built toys and furniture for his children, made repairs around the house and washed the dishes. He insisted on people correcting his Japanese, and corrected English manuscripts. He wrote books, and made speeches.  He went to concerts, played with children and ran races, always with enthusiasm and grace.

After “retiring” to Pilgrim Place in 2001, Bill continued to work half-time for the next five years as head of the International Center, dividing his time between Japan and the United States.  While at Pilgrim Place, he was active as a volunteer at a local elementary school and the Beta Center. He sang with the chorale briefly, walked with the race walkers, joined the “many hands movers”, and worked in furniture and haberdashery.

Bill is survived by his wife LaVerne; his daughter and son-in-law, Jody and Clark Magnuson of Mercer Island, Washington; his son and daughter-inlaw, Ty and Kyoko Corsten of Fountain Valley; and his siblings, Armin (Evelyn)Kroehler of Honolulu, Hawaii, Lois Kroehler of Silverdale, Washington,and Ruth (Dave) Dyck of Lynden, Washington. He also leaves his grandchildren Sky (Miriam), Terra, Ray and Kaili as well as his great-granddaughter Dax Olivia.

A memorial service was held on Sunday, October 18 at 3:30 p.m. in Pilgrim Place’s Decker Hall. In lieu of flowers, donations may be made to the Pilgrim Place Memory Care House Fund, 625 Mayflower Road, Claremont, CA 91711 or the Alzheimer’s Association, 225 North Michicgan Avenue, Floor 17, Chicago, IL 60601.  Condolences may be sent to the family in care of LaVern Kroehler, 755 Berkeley Avenue, Claremont, CA 91711.