Woman to Woman Worldwide Round Table for Mission Development

The Round Table for Mission Development in Mexico consists of the Christian Congregational Churches of Mexico, the Fraternity of Evangelical Christian Churches (Disciples of Christ) of Mexico (CICE), and the Christian Church (Disciples of Christ) of Mexico.  Since 2006, the Round Table has been a unique space for the three churches to do God´s mission and live out God’s reconciliation in a united way within the volatile and conflictive context of Mexican churches and overall society.  Through their meetings and shared efforts in areas of theological curriculum and summer encounters, mutual recognition of ministerial orders, and their ongoing search for transparency and effectiveness in their diaconal ministries, the Round Table for Mission Development has contributed to the reconciliation of divided Mexican churches and Christians.

Projects that the Round Table for Mission Development in Mexico have developed are by women of the three member churches of the Round Table.  These projects are micro-credit efforts through which women take out loans at a low interest rate for family income-generation projects. Then, they pay back the loans from the proceeds of their project in order to benefit additional women with loans.

Participants on the Disciple Woman to Woman Worldwide (WWW) mission trip in 2013 from the U.S. and Canada were quite inspired by their visits with Mexican women of the Round Table for Mission Development.  At the concluding meeting between both groups, they made an affirmation statement that in part states:

Aware of our identity as women created in the image and likeness of God, trained to undertake our journey toward a full life in relationship with our environment and ourselves, we reaffirm our desire to strengthen this identity in a community process of information, training, education and renewal.

The WWW women learned about some of the micro-credit projects the women in Mexico have undertaken:

In Aguascalientes, the Christian Church (Disciples of Christ) presented their projects which included a couple who has purchased 32 goats with a loan provided by the project.  From these goats they will sell the goat’s milk and meat as they reproduce.  They currently have 25 females of which four are impregnated and seven males.  These goats have approximately 128 acres of land on which to graze.

Another micro-credit project is of pig-raising.  Pastor Claudia and her husband have adult and baby pigs. They will keep some to reproduce and others will be sold for meat.  They hope to one day have at least 50 pigs so they can provide a more comfortable life for their family from this income-generation effort.

Karen and her husband shared information about their sheep project.  They purchased 15 sheep that were expecting and 20 young males.  They are fattening the sheep and selling the lambs for meat. Karen and her family live on a beautiful human-made lake.  She grazes the sheep on the pasture around the lake.

The WWW women also visited a restaurant managed by Flory which specializes in healthy foods (salads, smoothies, etc.).  They tried some of her food and enjoyed it very much.  She received $2,000 to start her business and has a year to pay it back.

In San Luis Potosí, the Fraternity of Evangelical Christian Church (Disciples of Christ) of Mexico presented their project called La Joya Divina (The Divine Jewel).  This micro-credit project involves the processing and sale of organic-artisan coffee processed by indigenous women from the Huasteca Region.

The women from the Christian Congregational Churches of Mexico have several micro-credit projects.  They include a woman who sells items at a bazaar, two women who cook and sell food from their home, and another woman who makes tamales using the church’s kitchen and sells them. 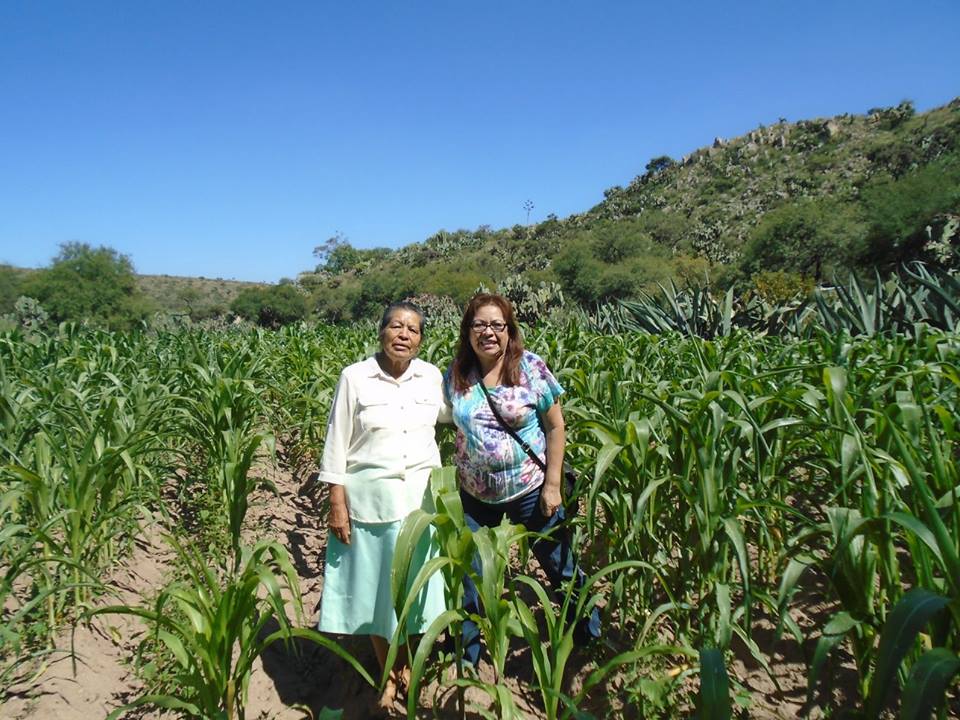 The Mexico Woman to Woman Worldwide Round Table consists of the Christian Congregational Churches of Mexico, the Fraternity of Evangelical Christian Churches (Disciples of Christ) of Mexico (CICE), and the Christian Church (Disciples of Christ) of Mexico. Since the mid-2000s, their meetings, shared efforts, and projects have contributed to the reconciliation of divided Mexican churches and Christians. The large majority of these projects are microcredit efforts. Once they have begun to receive returns on their business investments, they pay back the loans from the proceeds of their project in order to benefit additional women with loans. Moving forward, every three years the Woman to Woman Worldwide Round Table will check in on new microenterprises developed and evaluate strategic directions of the project. This year, the Woman to Woman Worldwide Round Table entered a new stage called, I am Woman and I am Present.

As the round table and new stage develops over the next years, one of the main goals is to host a series of conferences in the region. These conferences will foster business development, develop strategies, and to cultivate important skills that create successful microcredit enterprises. The Woman to Woman Worldwide Round Table hopes these conferences will invite and inspire new women to develop and to create new ideas and projects. In addition, further expansion and development will foster connections with sisters from different regions and countries, through sharing strategies and tactics, and planning new projects.  These connections and relationships will enrich and empower women through solidarity with one another. 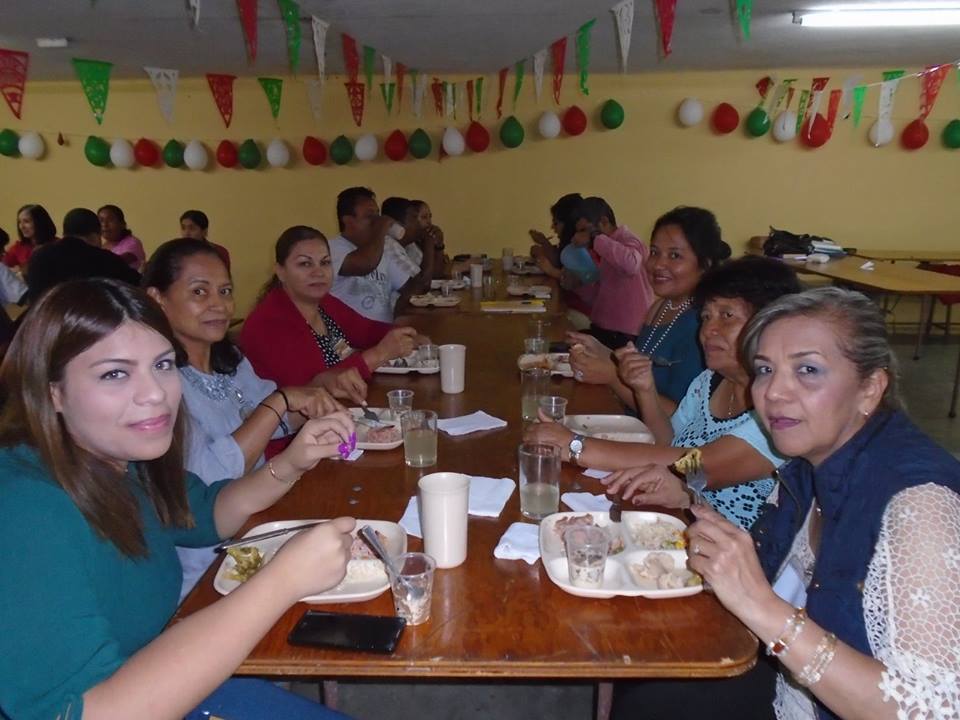 Angel Rivera-Agosto, the Global Ministries Latin America and Caribbean Area Executive, visited the project this fall. After speaking with participants and seeing the project, Angel commented, “As women have been working in their respective economic initiatives, they have joined together to help each other in a cooperative way for everyone’s best wellbeing. For example, some women organized and opened a cafeteria, and they are selling items from different enterprises of women in the community, such as coffee and Mexican treats.  This is a direct result of the way the round table has been organized, through dialogue and collaboration between women.”

Looking towards the future, Mexico Woman to Woman Worldwide Round Table hopes to increase and develop its capacity for more projects and conferences, in order to enrich, empower, and sow solidarity between women and their communities around the world.

The Mexico Woman to Woman Worldwide Round Table is an ongoing partnership between the Christian Congregational Churches of Mexico, the Fraternity of Evangelical Christian Churches (Disciples of Christ) of Mexico (CICE), and the Christian Church (Disciples of Christ) of Mexico.  The Round Table is a gathering for women within these churches to unite, to discuss, and to develop ministries within their communities. This project is contributing to the reconciliation of historically divided Christian communities. Part of the Mexico Woman to Woman Round Table ministry is the opportunity to start small business projects with microcredit loans. These projects encourage women to use their gifts creatively to generate income for their families.  Later, when the loan is paid back, those same funds benefit other women wishing to start projects of their own.  Three such projects currently involved in the microcredit effort are the Genesis Café, Flowers from Retes and the Taste Corner. 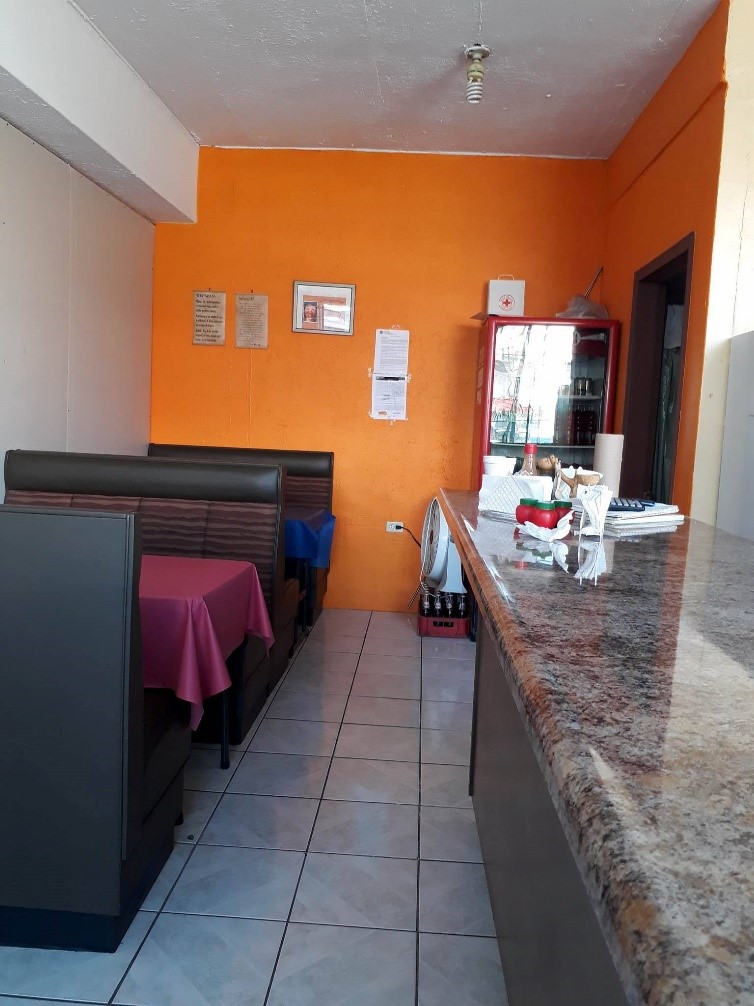 The Genesis Café is located in Empalme, Sonora. The café serves coffee and smoothies as well as sweet empanadas, yogurts, and cakes. Unique to this café is that it functions solely through delivery and advertises by distributing flyers to local homes.  The business owners look forward to expanding their menu by adding Argentine-style empanadas as well as widening their service area by using motorcycle transportation.

A more recent project started by the Mexico Woman-to-Woman Round Table is the restaurant called Taste Corner in Tijuana. Participants are learning to navigate the decisions of starting a new business - such as finding the best location, attracting customers, and hiring employees.

Teodora, a microcredit project participant, exclaims the Woman to Woman Roundtable microcredit project in San Luis Potosi has brought her great joy. Teodora enjoys being able to help provide her family, while staying close to home and her family. Through sharing her gifts of knitting and embroidering at the Woman to Woman Roundtable, she is not only helping her family financially, but she is also helping to empower other women in her community.

Future plans for the Mexico Woman to Woman Roundtable include raising funds for the completion of the “Flowers from Retes” greenhouse and shop. This will increase the number of women able to participate in the microcredit program of the Woman to Woman Roundtable project. The project continues to increase and develop its capacity for more projects and conferences, in order to enrich, empower, and sow solidarity between women and their communities around Mexico. 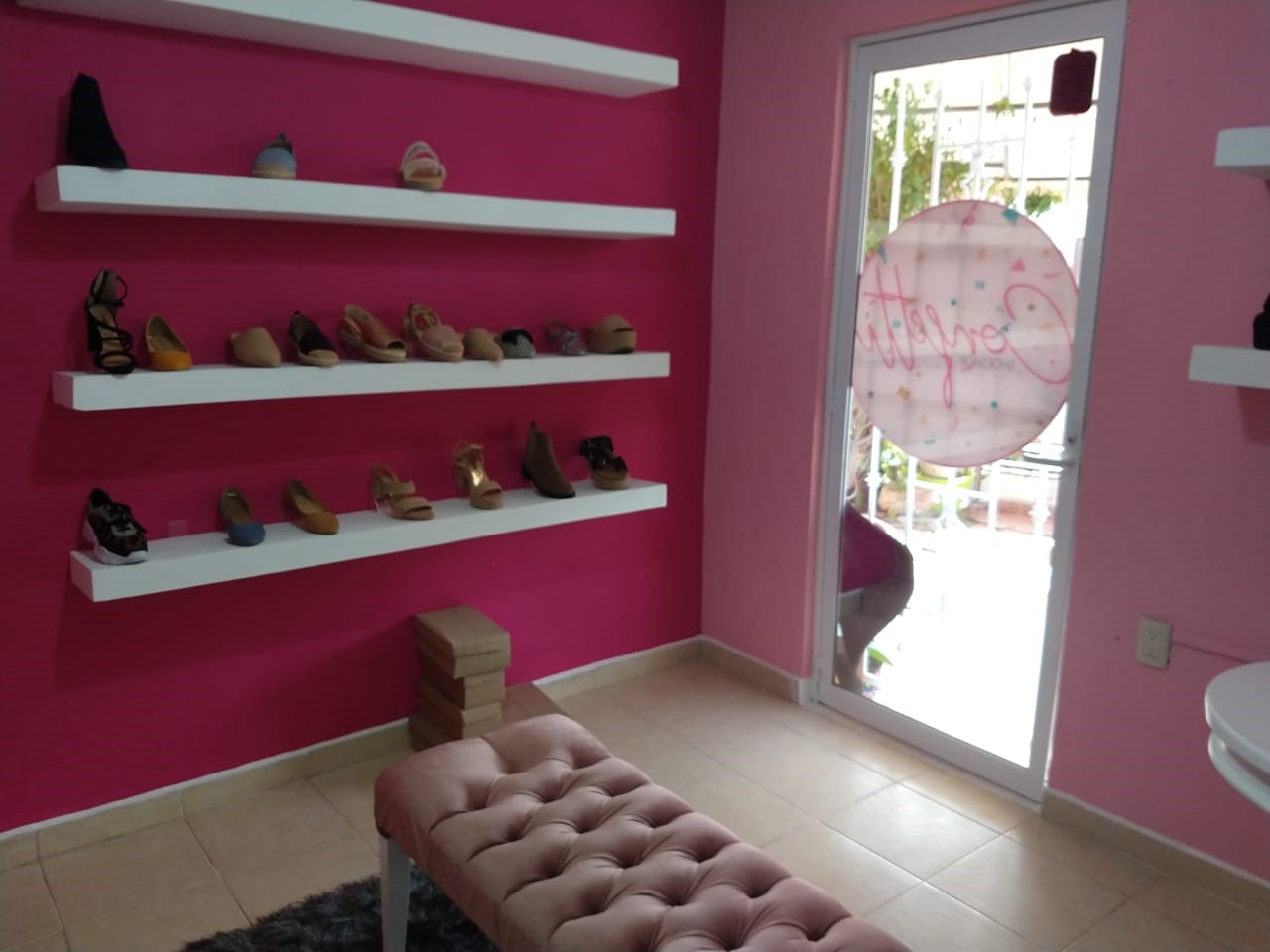 on a new women’s footwear boutique and the CICE shares about a small business that sells baked goods, coffee, honey, and other hand-crafted foods. The women who run the shoe store began by promoting the store to local women at the end of 2019 and then opened their doors at the beginning of 2020. The shoe store also sells shoes through an online store. The women running the boutique hope to release new merchandise each season and continue to make more women aware of their shop during 2020.

The homemade artisan food store is named Divine Jewel. This business began by selling coffee, sauces, and honey in local 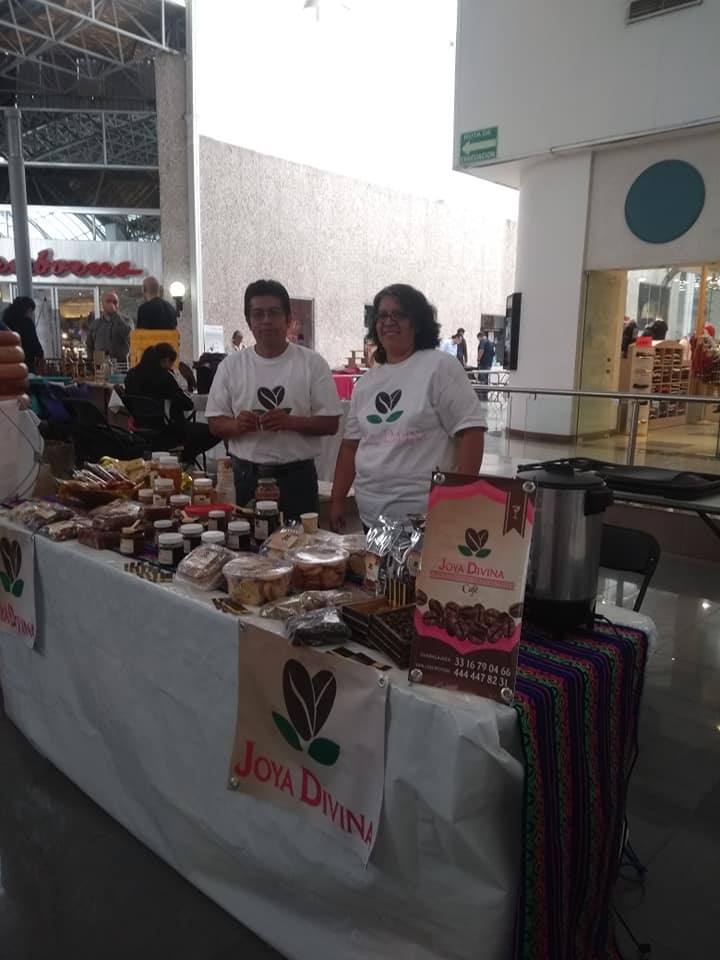 markets around San Louis Potosí. Up to this point, sales have all been at markets or for home delivery. The women who run the Divine Jewel have gained permits to open a physical location out of a home and are excited to open this physical location sometime in 2020. Also, during 2020, these women plan to learn soap making and incorporate natural cosmetic products into their store. During the COVID-19 pandemic, the Devine Jewel store is remaining open and fulfilling orders through home delivery.

Both microcredit initiatives provide income for women and their families. As these two stores become self-sufficient, they also will provide further funds for the Mexico Woman to Woman Worldwide Round Table to make microcredit grants to other similar projects.