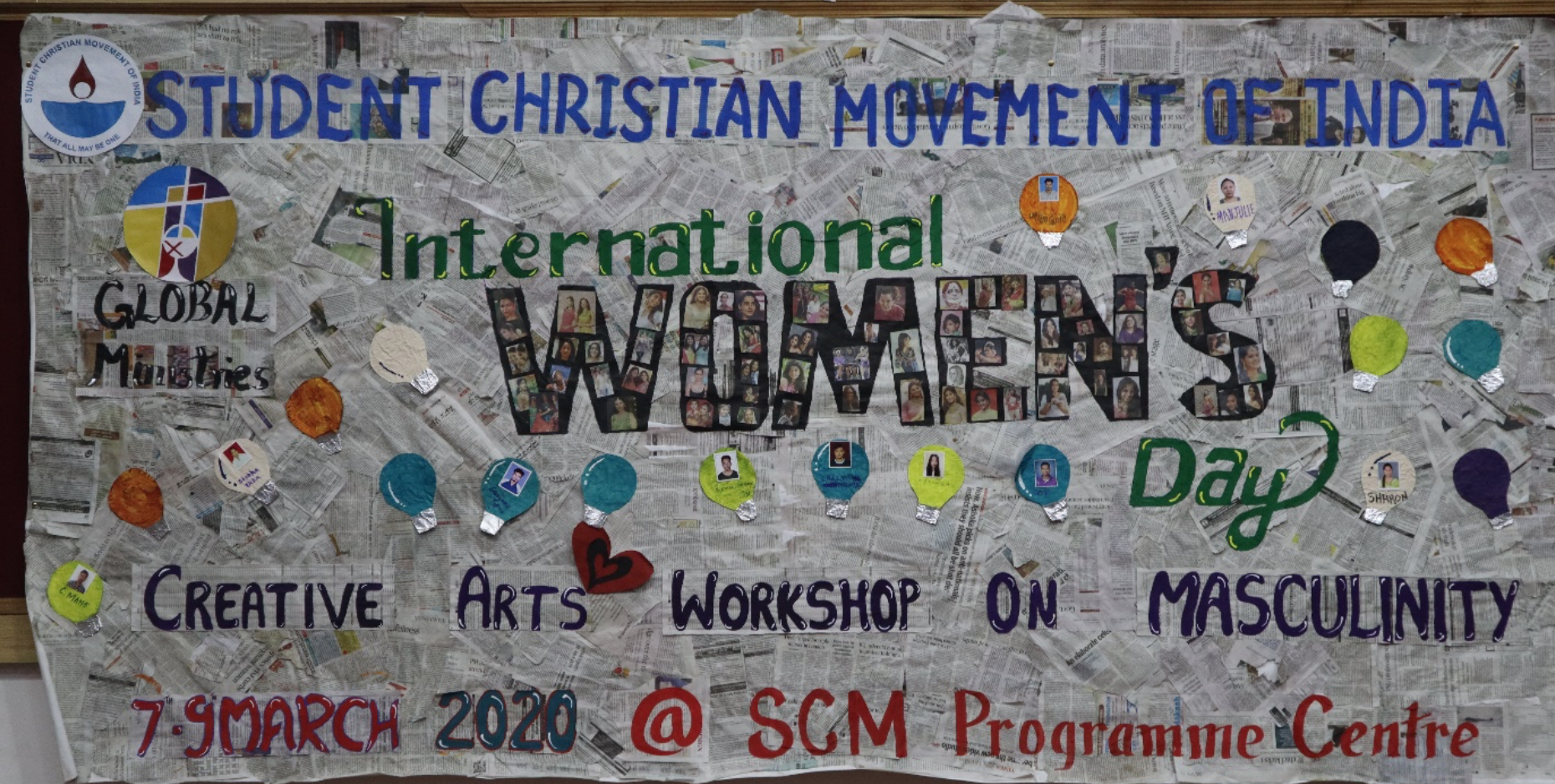 The Student Christian Movement of India’s (SCMI) Gender and Social Justice Desk facilitated a National Workshop on Creative Arts on the theme of masculinity from 7-9 March 2020 at the SCMI Programme Centre, Bangalore. The workshop was supported by Global Ministries of the United Church of Christ and the Christian Church (Disciples of Christ), USA.

The workshop began with the inaugural session in which Ms. Hephzibah A Lazar, one of the organizing team members, welcomed participants to the gathering with an opening prayer and a round of self-introduction. Then Ms. Manjulie took up a general briefing session and established the context of the workshop. In her address she introduced the work of SCM, its aims and basis. The code of conduct and house rules for the next three days were stated and a framework of how to look at masculinity was introduced. Ms. Manjulie started with a video “Boys Don’t Cry” by White Ribbon and raised essential questions on how we could ‘deconstruct’ the toxic social expectations on how a man should be and how we could challenge and promote healthy and inclusive masculinity. She invited the student participants to write down their experiences and the restrictions imposed on them as individuals based on their gender. She also urged the students to be open to unlearn and relearn, to express and clarify, to question and to respond in order to help realize what a man can be. 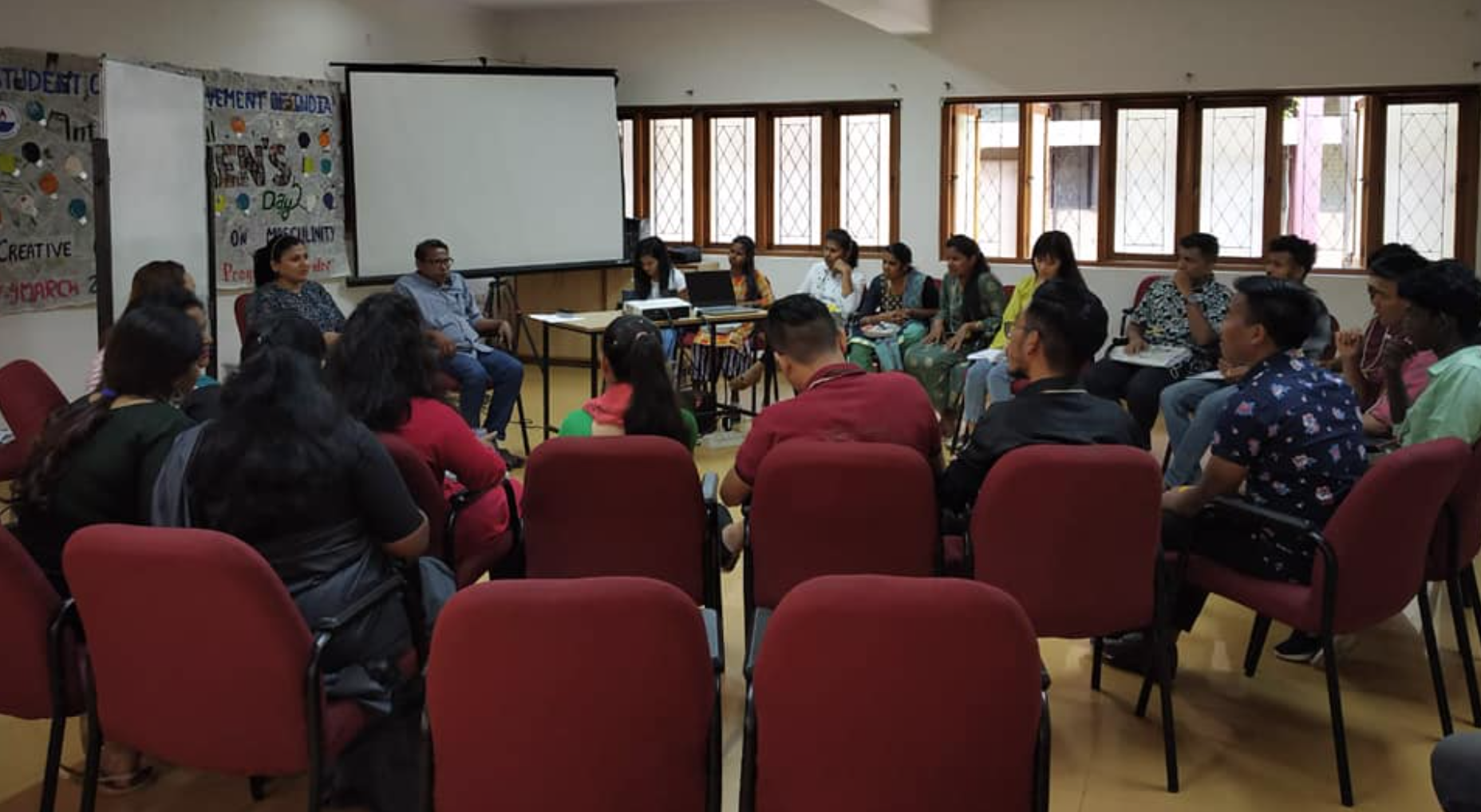 Mr. Suresh Tholil, an artist and a documentary filmmaker led the next session to orient the students on how art and masculinity are related. He talked about color psychology and how to understand masculinity from colors by studying the impact of colors on emotions. He also stressed that color induces certain emotions in a person. He further added that colors are influenced by psychology and ideology. He explained the meaning of those colors associated with fascist ideology, revolutions and the intention behind colors used in restaurants and bars to enhance one’s appetite. There was an in-depth deliberation on art, civilization, and love. The same short video “Boys Don’t cry” was used to analyze how colors are used to portray and convey certain emotions.

He also talked about the relation between religion and masculinity. He highlighted the masculine colors used in religious places,  citing churches as an example. The color of church buildings is mostly white as the color white represents peace. And he relates colors to masculinity and sexuality as well. Different colors release heat in our bodies. Moreover, he identified and categorized sounds from a color perspective. At the end of his session, Mr. Suresh introduced basic forms of art such as shapes and patterns. He asked the students to draw the shape of a palm as an example. He concluded that every object on this earth has a shape and a pattern.

After a short tea break of 15 minutes, Ms. Blessy, a certified musician, took a session on forms of music and poetry. She stated that music and poetry are a way or medium for expressing one’s emotions. She equated art to love and to music and poetry. She did an exercise with the students to observe how the expression of emotion is crucial in every interaction. The students hugged each other with emotion and some hugged without showing any emotion. Just as emotions are expressed through colors, the second session stressed how emotions are expressed through poetry and music. She also mentioned how we can understand emotions through music and how language plays an important role if one tries to emote through words.

She too connected the earlier video with her session to observe the language used, the experiences, and the expressions. And then she introduced the few common things between poetry and music. She said the first and foremost thing is the language/word. And then comes the experience of emotions such as pain, joy, happiness, and what made you write those words. Then third comes the expression and presentation. Students were taught a few tips about the importance of presentation. And the audiences’ attention will depend on how well they can present their work. And thus, their work will convey a meaningful message depending on the way they present it.

The lunch break followed and students gathered back for the ice-breaking session. Ms. Dakerlin and Mr. Binu facilitated this session and the student participants played three games on concentration, teamwork, and communication. After this session, the students were split into two groups, one group for painting and the other for poetry and music. They were instructed on how to start their artwork and the art materials were handed over to them. They were given time to think and articulate the concept they want to work on until the evening tea break. And then the students worked separately with their respective groups. Mr. Suresh facilitated the painting group and Ms. Blessy the poetry and music group until dinner. There was a flashback session after dinner and the students were briefed for the next day schedule. 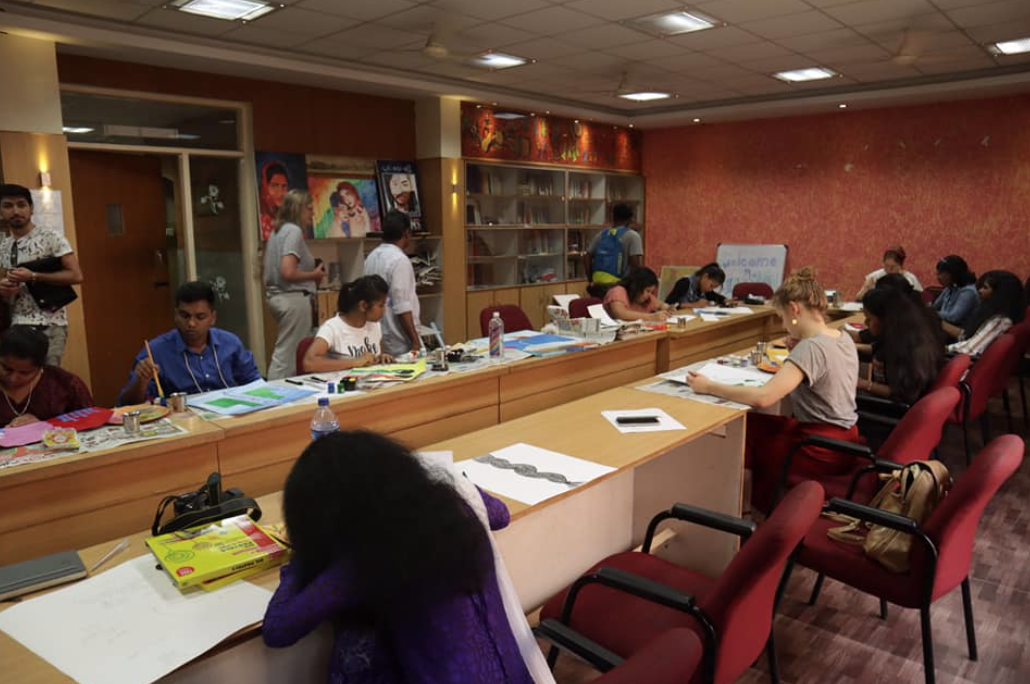 The second day was Sunday, therefore the students were given an option to attend church if they wished to. Mr. Robinson, one of the organizing team members moderated the whole day schedule. And at 9 am all the students gathered to practice a group song as a choir to energize themselves. After which the first workshop activity of the day began. The students worked individually and the facilitators were around to assist with whatever help they need. The students spent their time on their work and there was a tea break. After the break, they resumed with the second workshop activity where they fully concentrate on their work as they have to display their work to see how far they have gone. And they presented their work and the floor was open for any suggestions and comments before other participants.

Some of the students from Germany who had come to SCMI for an exchange program participated in the painting activity as well. At the end of the second day, all participants gathered to reflect on the activities of the entire day. Each student was asked to share their opinion and what they felt about the day. And the session closed with a short discussion for the final day. 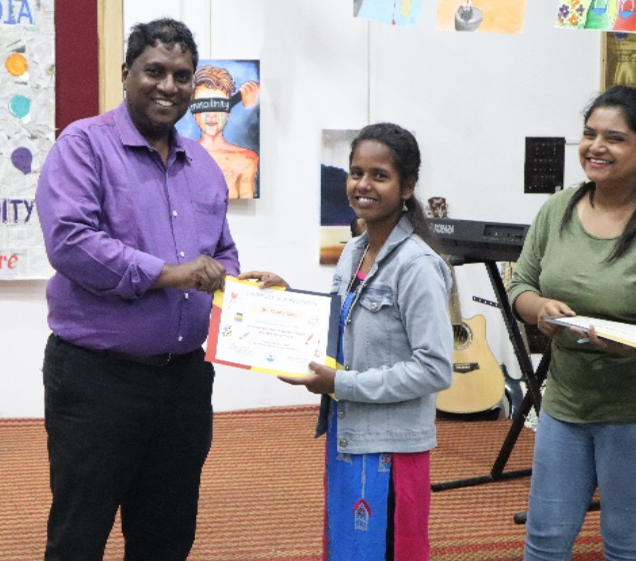 The third day of the workshop was a final day for the participants to present their work. A few senior friends and staff were invited to the final day event. The first half of the day was spent in arranging and preparing for the event. Setting up the musical instruments and arranging the hall. After lunch, the students were given time to share their experiences. Eight students volunteered to share, and some shared about their first train travel experience and others shared what they have learned and observed during the 3-day workshop.

The remaining students shared how they felt about this workshop and how their understanding of masculinity had changed during the past couple of days. They said that they’ve not attended such a workshop elsewhere and would like to have a similar workshop again.

After the experience sharing session, Rev. Inbaraj Jeyakumar, the General Secretary distributed certificates of appreciation to the participants. 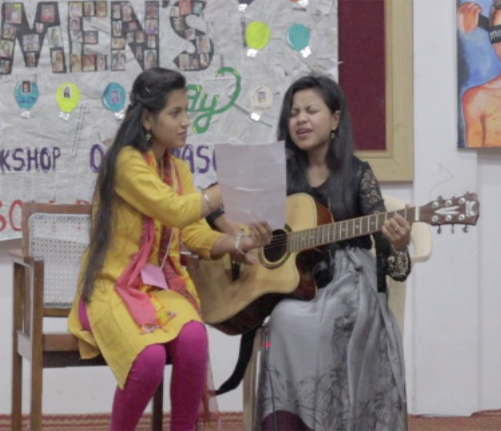 And after the presentation, there was a group song dedicated to everyone who was present at the final event. And the event was closed with a prayer by Ms. Annette from ESG Germany. There were group photo sessions and selfies to mark the end of the fruitful 3-day workshop on masculinity. 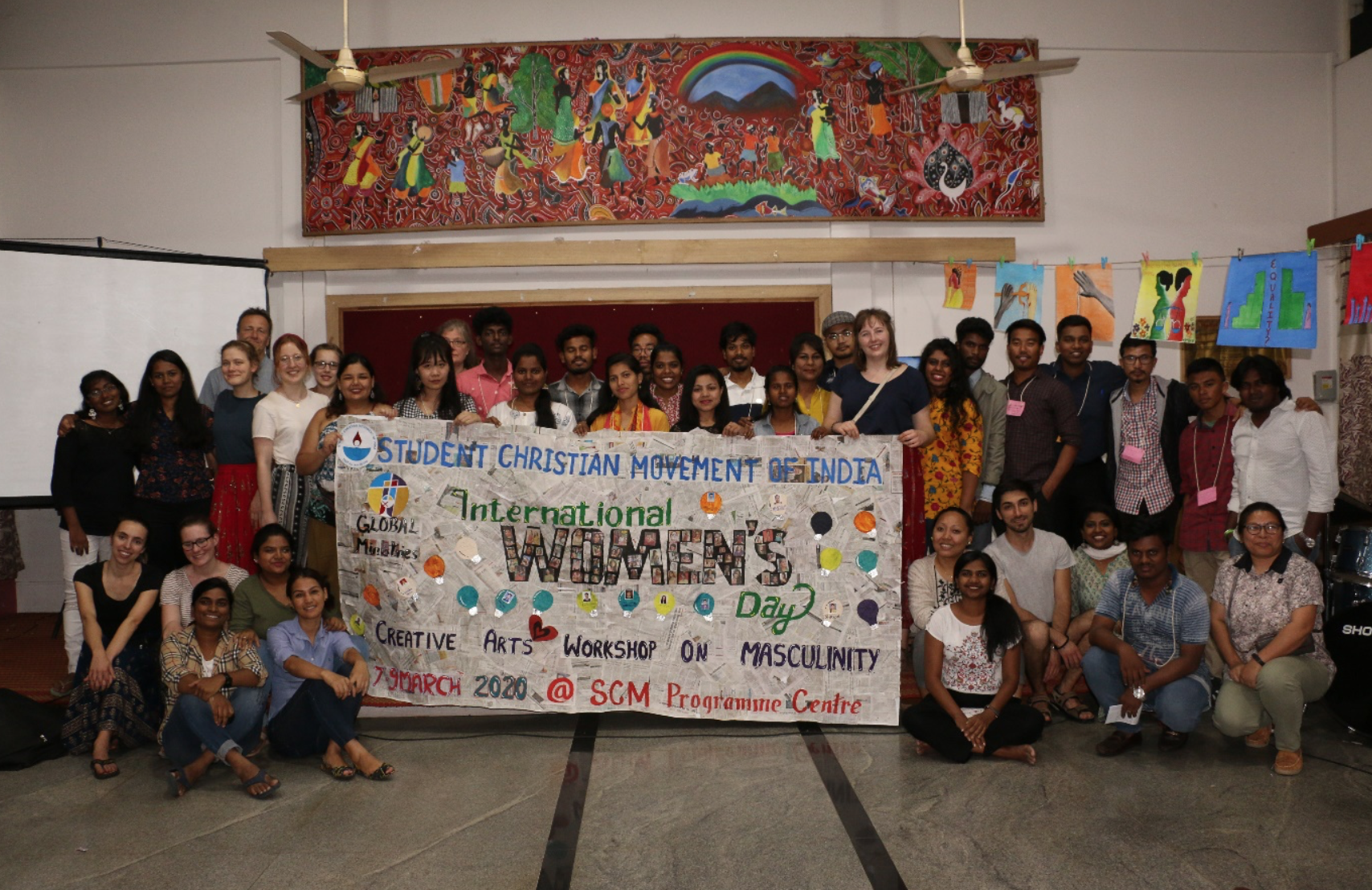