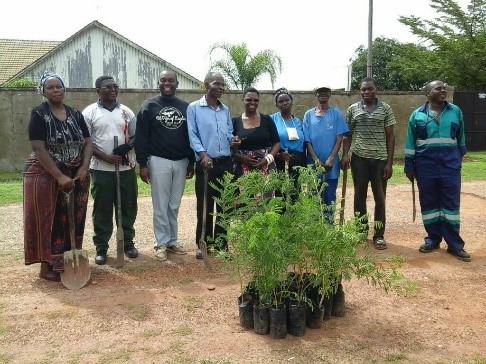 In celebration of the 50th anniversary of Earth Day, the United Church of Christ Three Great Loves initiative held a tree planting campaign. During the months of February, March, and April 2020, funds were received for the planting of 9,668 trees in total. Some of the funds raised   supported the planting of trees in national parks in the United States by the Arbor Day Foundation while congregations and individuals also reported self-planted trees to Interfaith Power and Light.  Another portion of these funds were raised to support the tree planting efforts of three Global Ministries partners. The Organization of African Instituted Churches’s Tree for Life Project in Kenya plants trees in areas identified as priority regions for reforestation in East Africa; Theological Education by Extension in Zambia’s Green Church project trains new Climate Ambassadors who plant trees in communities across Zambia; and the YMCA/YWCA of Palestine’s Keep Hope Alive! Olive tree planting campaign, plants olive trees as part of an effort where trees have been the target of attacks.

This campaign raised a total of $8,970.00 for the tree planting efforts of these global partners towards the planting of 623 trees and include the gifts of 152 donors.

One of those donors, Diane Snowa, wrote that she was inspired to give for several reasons. Diane wrote, the well-being of our natural environment has always been a priority of mine.  When Global Ministries offered an opportunity to support the planting of trees, my participation was a no brainer. Diane explained that she chose to support the project in Kenya to honor a friend who was born in Kenya and was a member of a UCC church she served in Portsmouth, VA. She wrote, The Tumwas’ incredibly strong faith in God and their incredibly strong support of me as their Pastor yielded a lifelong friendship. So, I chose Kenya as the place to plant trees in honor of the Tumwas.