The churches in the Pacific are standing beside the people of Kiribati (an island nation in the northern Pacific, south of Hawaii) in a very trying and painful moment in their maritime history. On January 18 the ferry MV Butiraoi (pronounce pushy-rah-o-ee) left the island of Nonouti (pronounce nor- nor –oush-ee) for the capital of Kiribati Tarawa. The ferry was carrying 72 adults, 13 high school students, and 10 elementary school children. None of the children survived the ordeal. 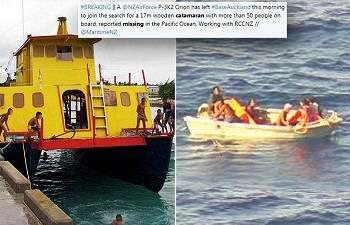 The students were heading back to continue their education after the Christmas holidays (schools in the Pacific with the exception of US territories, begin their school year in January and end it in November). For some students, this would be their first trip outside of their tiny atoll island of Nonouti to further their education in the capital. The adults were a mixture of those accompanying their children and those visiting relatives in Tarawa.

The Kiribati government with the help of the US Navy, Australian Navy, and New Zealand Navy searched in vain for any surviving passengers. Finally, seven passengers were found alive on the ferry’s lifeboat. According to them, there were more passengers on the lifeboat, unfortunately they died of thirst and hunger before being found by a long-line fishing boat six days after the boat broke in half.

Here in the Pacific, with our century’s long connectedness, before the Western powers divided us into Polynesian, Micronesian, and Melanesian depending on our appearances, we called each island by its name and we sailed the ocean freely. We were a big oceanic family who shared crops, arts, and traditions. Today in this technological era, this connective-ness still exist and is very dense.

Therefore, to lose 88 souls at one time is a tragedy for the whole Pacific region. The ecumenical body of the Pacific Conference of Churches stands with the people of Kiribati, especially Nonouti, in their pain and sorrow.

At such a time as this, I am reminded of Jesus’ words to the wind and sea in Matthew 4:39, “Peace, be still!” In times of tragedy, we are accustomed to consoling the mourners and victims. Jesus, in this story, changed the paradigm of such actions and declared peace to things beyond human grasp. This is more consoling and calming for it encompasses a promise that God takes care of us far beyond our human limits. It is an assuring presence within chaos itself from which we can draw strength and recuperate to continue to live.

This tragedy could have been prevented if the ferry that was meant to carry 30 passengers was not loaded with 95 passengers. For the future, we pray that governments across the region will enforce laws that hold shipping companies responsible for overloading their ferries. In a much smaller scale, this incident is a perfect picture of how the economy is valued above human life. But to the people of Kiribati, and the whole Pacific region, this is a tragedy in a very large scale.

We continue to pray for the people of Nonouti and the souls of the drowned victims.

Niko Sopepa serves as a Long­-term Volunteer with the Pacific Council of Churches located in Fiji. His appointment is made possible by your gifts to Disciples Mission Fund, Our Church’s Wider Mission, and your special gifts.