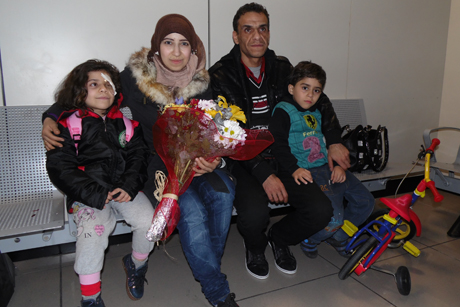 Falak al Hourani, a 7-year-old Syrian girl who has a rare form of eye cancer, her 6-year-old brother Hussein, and their parents arrived in Italy on Thursday, February 4, through the project "Humanitarian Corridors." Falak and her family come from Homs, Syria, now a pile of bombed-out ruins that was once a prosperous city of 800,000 people.

Falak has a rare tumor which affects the retina. Hoping to save her life, doctors at the Medical Center at the American University of Beirut removed one of her eyes. They have recommended follow-up chemotherapy which Falak will receive at the Roman Catholic Bambino Gesu Hospital in Rome.

Falak and her family were the first of one thousand refugees who will be coming to Italy during the next several months in the 'humanitarian corridors' program negotiated between the Federation of Protestant Churches in Italy, the Sant'Egidio Community and the Italian government.

Under that agreement, the Italian churches have committed to provide housing and culture training and language lessons for these one thousand special needs refugees during their first months in Italy.

A detailed update on Humanitarian Borders will follow in the next couple days. So far arrangements have been made for 84 refugees to fly to Italy from Lebanon. These 84 refugees will include both Christians and Muslims.