Retoños en las ruinas: esperanza en el trauma…. Roots in the ruins: hope in trauma – A spiritual accompaniment program to nourish hope and develop resilience in the midst of conflict and emotional trauma. During the past year, I have continued to facilitate the “Retoños” program alongside the staff from the Institute for Intercultural Study and Research (INESIN) in southern Mexico with participants from Mexico, Chile, Nicaragua, Puerto Rico, and the United States. In each of the five courses, the experience of storytelling and story-listening is at the core of our time together. We encourage each other in the face of the challenges, changes, and choices shaping our personal lives, communities, and countries. I wrote the following story while thinking about the impact that people who have lived through the devastation of earthquakes, hurricanes, and floods and the uncertainties of political unrest and forced migration have had on their own healing and the healing of others through simple acts of goodness, kindness, and compassion. This story and newsletter are dedicated to the children, women and men who keep fluttering their wings against all odds, sending out whispers of life, hope, dignity, and peace blowing softly, but tenaciously, against the storms of destruction and death. 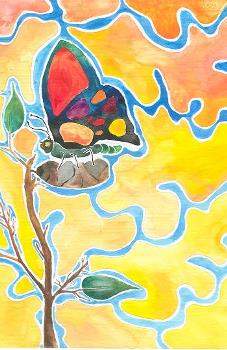 Can you believe that a butterfly fluttering its wings here can change the weather somewhere far away? I know it is true because I saw a butterfly do just that.

But she wasn’t always a butterfly. She used to be a tiny caterpillar. She used to hide behind the door and curl up in a little ball so that no one would step on her or scream when they saw her. Her hope was not to be noticed.

One day after eating and growing, she spun a silky cocoon around herself. She thought it would be the best place to hide. Something happened. She was still herself, and yet everything changed. . .

When she came out of the cocoon, she could fly! Everything looked different from up in the air. She could see flowers, and trees, and beauty all around her. She didn’t want to hide anymore. The butterfly fluttered first close to home, and then she tested the strength of her wings. She flew over the trees, and then over the mountains. She even flew over the ocean.

She fluttered her wings and flew to another land where she met another tiny caterpillar. He was frightened because he was nearly stepped on, and a little girl screamed when she found him crawling on her shirt. No one ever noticed him, and he felt all alone.

The caterpillar had never had a friend, much less such a beautiful one as the butterfly. He loved to watch her swoop and come to a gentle landing nearby. Even though he couldn’t understand the butterfly, he was very sad and lonely when she left.

He ate and grew, but he kept crawling on the ground hiding from all the big things that scared him. One awful day, a storm raged over the land, its whirling wind and water flooding the fields and uprooting the forests. The caterpillar wasn’t just afraid, he was terrified. He hid under a rock until a puddle nearly washed him away. He hid under a leaf but it didn’t protect him from the wind.

He thought he would drown so he climbed on a branch and spun a cocoon to protect himself, but the storm became fiercer. There was hail and lightening with big rumbling thunderbolts. The wind was so strong it was going to blow the whole tree away with the branch and the tiny cocoon clinging to it.

Back home, the butterfly listened as the sun and the birds chattered about the storm in the land far away. The butterfly knew in her heart that the caterpillar was in danger. There had to be something she could do.

So, she fluttered her wings. The air stirred around her. Then she fluttered some more until she was beating a tiny wisp of a breeze. She didn´t give up, flapping and flapping until the breeze whipped up stronger and it became a wind. Then the wind traveled over the trees, the mountains, and the oceans until it had the force of a gale. When it finally reached the far away land, it pushed the storm clouds until the rain and the lighting had to leave. The sun came out warming and drying the cocoon.

Hardly daring to believe he was safe, the caterpillar came out of his cocoon. Except he wasn’t a caterpillar anymore!  He, too, was a butterfly. He stretched his wings and flew around looking at the world from far above. He looked at the flowers and the trees, and beauty all around him. He no longer felt like hiding!

What about the butterfly? She just kept on fluttering knowing that her tiny wings were strong enough to move storm clouds, and that in her heart there was more than enough love to help a caterpillar become a butterfly in a land far away.

Elena Huegel serves with the Intercultural Research and Studies Institute (INESIN) in Chiapas, Mexico. She serves as a consultant for peace (conflict transformation) and environmental education. Her appointment is made possible by your gifts to Disciples Mission Fund, Our Church’s Wider Mission, and your special gifts.