by Global Ministries (Disciples of Christ and United Church of Christ) | published on Aug 4, 2020

THE LIFE & MINISTRY OF THE LATE REV. PETER KANIAH KARIUKI

EARLY LIFE
The late Rev. Peter Kania Kariuki was born on July 4, 1965, as a fourth child to the late Enock Kariuki Wanjohi and Damaris Nyandia Kariuki in Kangaita village, Tetu Sub-county, Nyeri County. His siblings are Richard Mundia, Samuel Mwangi, Giorgio Ndirangu, Wacera Mbogo, Wanja Ciira, Melody Mwangi and late David Gatua. He was the son in law to the late Samuel Gikaria and Leah Wangari Gikaria and brother in law to Mercy Wanjiru, Nancy Wambui, Michael Mbogo, Wabere Ciira and Francis Mwangi. During his early life, late Rev. Kaniah helped his parents in tending to crops at their farm and grazing livestock. He was a joyful and generous boy and very helpful around their home. 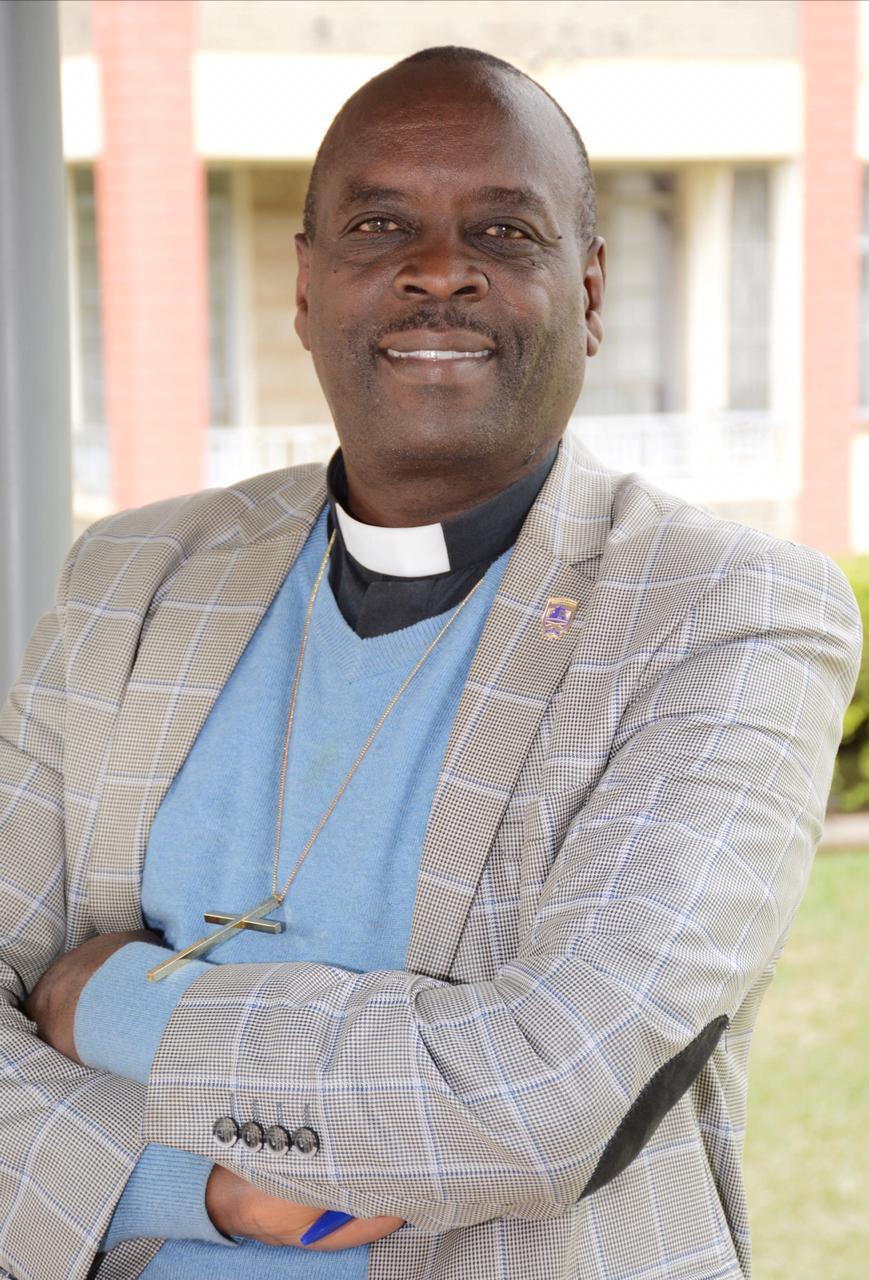 SPIRITUAL LIFE
His spiritual journey started at his home under a Christian family. In 1973, he was baptized by the Very Rev. Dr. Jesse Kamau and later he was confirmed as a full member. In 1977, while a class four boy, he accepted Christ as his personal Saviour in an East African Revival Movement Fellowship held in his home Church – PCEA Kangaita. Since then, he has been an ardent follower of the Fellowship and a courageous witness of the Lord Jesus Christ.

EDUCATION AND THEOLOGICAL FORMATION
Rev. Kania started his formal education at Kagumo primary school. He then proceeded to Giakanja Secondary School where he was the Christian Union leader. After O-levels, he worked as a casual at a restaurant in Nairobi, and Jomo Kenyatta International Airport. By then he was serving with the youth in Dandora Parish (Current Nairobi East Presbytery). The parish session took notice of his special calling and passion to the ministry and engaged him as an Evangelist.

Later, discerning God’s calling to ordained ministry, the then Nairobi Presbytery seconded him for training. He was admitted to Pastoral Institute, Kikuyu (now Presbyterian University) in 1993 for a Diploma in Theology where he graduated in 1995. In the year 2002, the Training and Personnel Development Committee nominated him to pursue a Bachelor of Divinity at St. Paul’s United Theological College (now St. Paul’s University) where he graduated in 2005. He later proceeded to Presbyterian College and Theological Seminary in South Korea where he pursued a Master of Theology majoring in Missiology, and graduated in 2007.

MARRIAGE AND FAMILY
Rev. Peter Kaniah married the love of his life, Nelius Wanjiru Kaniah, in December 1992 at PCEA Kericho Church in Kiganjo Presbytery. Their wedding was presided over by Rev. Samuel Kinyua. They have been blessed with three children – Lydiah Njeri Wandia Kaniah, Kenneth Kariuki Kaniah and Joel Gikaria Kaniah. He is also blessed with a granddaughter, Niam Maryanne Wanjiru.

ORDAINED MINISTRY
Rev. Kaniah served as a Church Minister from 1996 to date. He served in several local congregations throughout the years before being posted to the Head Office to work as the Presbyterian Church Men Fellowship (PCMF) Director on May 2, 2011. In 2014, he was nominated as the Secretary General of the Presbyterian Church of East Africa (PCEA). He was installed to office in April 2015, a capacity in which he has served until his last day.

LEADERSHIP AND ADMINISTRATION
Over the years Rev. Kaniah has demonstrated consistent, visionary, and dedicated servant leadership wherever the Lord called him to serve. He spearheaded addiction rehabilitation programs in Kikuyu, Juja, and Ruai. In PCMF ministry, he was pivotal in the mobilization and growth of the men’s ministry in the Presbyterian fraternity. He encouraged many men to join PCMF since it was in its young stages by organizing and facilitating seminars and commissionings. He traversed all parts of this country and made several trips abroad to ensure the PCMF group stood firm. He is noted to have championed the formation of the Pan-African Presbyterian Men Fellowship (PAMPF), of which he was the first President.

As the church executive officer, synergy among the departments and church institutions was his clarion call. This synergy enabled the church to initiate the swimming pool project at Milele Guest house, complete the Lavington town-houses project, redeem the church projects that were almost sinking in debts, as well as the beautification and landscaping project at the PCEA headquarters. He was instrumental in the establishment of Kirk TV just before the outbreak of COVID-19, which has become an essential tool of evangelism and pastoral care. When crisis engulfed the nation such as the Solai dam tragedy, political upheavals, and currently the COVID-19 pandemic, he never shied from mobilizing the Church to give a hand. Recently through the Adopt-a-Family programme, he spearheaded the feeding of more than 32,000 families affected by the pandemic.

Like Nehemiah in the Bible, Rev Kaniah was not only a diligent worker but also a prayer mobilizer who helped to initiate chain-prayer and fasting schedules in the church.
On the national scene, he was recently nominated to be the patron of the Professional Criminologist Association of Kenya (PCAK).

AUTHORSHIP
While serving as PCMF Director, the quest of writing was born out of his speaking engagements with men. In the year 2013, he launched his 1st book, “Authentic Fatherhood.” He later launched another book in the year 2014, “Real fatherhood in a Fatherless Generation.” By the time of his death, he was in the process of writing his third book.

MISSION AND COMMUNITY WORK
Rev. Kaniah had a lot of passion for the less fortunate and youth. He supported many children without families, widows, and widowers. He also privately sponsored many needy students in university and colleges. He was also instrumental in establishing the Mother Esther Girls Rescue Center and water drilling projects for needy communities.

As an ardent anti-alcoholism campaigner, he fostered drug and substance abuse recovery self-help groups in Kikuyu, Juja, Ruai, and many parishes where he served. He had a heart for transformation and was instrumental in the reformation of many young men and women who were previously involved in sect and gang activities.

Rev. Kaniah was an enthusiastic environmental conservationist. He was part of the one-million-tree planting initiative by the PCEA Church, which was launched by the GA moderator and is still ongoing. He led by example in planting trees and encouraging farmers to do agroforestry.

As a crusader of social justice and economic empowerment, Rev. Kaniah encouraged communities to start SACCOs and self-help groups for the vulnerable, wherever he served.

As an ardent defender of Christian faith, he never shied from being considered controversial in issues such as faith and culture.

PROMOTION TO GLORY
Rev. Kaniah enjoyed good health until late June when he started feeling unwell and was admitted at the Nairobi Hospital. He continued with treatment until he was promoted to higher glory on the Morning of July 26, 2020.

He is survived by a wife, a daughter, two sons, and a granddaughter.

SO, WHO WAS REV. PETER KANIA?
The late Rev. Kania was a loving husband; a caring father; a visionary leader; generous and selfless person; a courageous witness of our Lord Jesus Christ; a mentor; a crusader of the boy child; a sociable and very generous person; and, a missioner at heart.

I have fought the good fight, I have finished the race, I have kept the faith – Now there is in store for me the crown of righteousness, which the Lord, the righteous, Judge, will award to me on that day, but not only to me, but also to all who have longed for his appearing. (2 Tim 4:7-8)