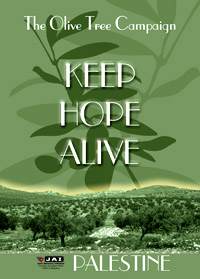 More than 200 olive trees, in the villages of Qusra and Jaloud  in the Nablus area (northern West Bank), were uprooted and stolen by Israeli settlers in the last few days. All these trees were part of the Olive trees distributed by the Keep Hope Alive Olive Tree Campaign of the Joint Advocacy Initiative of the YWCA of Palestine and the East Jerusalem YMCA.

The Olive Tree Campaign staff visited the attacked fields, took pictures, and met and talked to the affected farmers, affirming that the Campaign will keep working with to support them with further olive trees soon or in the coming seasons.