On March 19th B’Tselem, one of Global Ministries partners in Israel/Palestine, held a press conference to launch its new report, Minors in Jeopardy: Violation of the Rights of Palestinian Minors by Israel’s Military Courts. I went to the press conference because the YWCA of Palestine centers its work on youth and women and I wanted to learn more about the legal system that detains and imprisons so many of our youth. I also wanted to hear if indeed any changes had been made to safe guard the rights of minors because both the United Church of Christ and Disciples of Church have passed resolutions about the injustice of detaining and sentencing of minors. What I heard and later read has confirmed my worst fears. 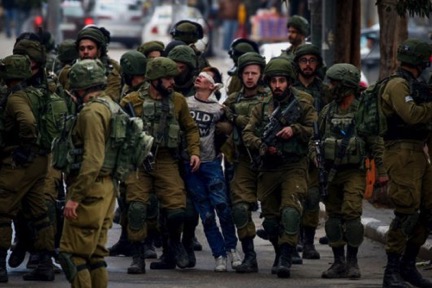 The report analyzes the changes Israel said it has made in the treatment of Palestinian minors in military courts. In 2009, Israel established the Military Juvenile Court, which it views as a landmark achievement in the protection of minors’ rights in the military court system. The report says that technical changes have not improved the protection of minor’s rights. Furthermore, it says that the main principles of incarcerating a minor as a measure of last resort, and holding the child’s interests at the center are not being adhered to. In fact, the very opposite. This is permissible according to Israeli law because all Palestinians are subject to military not civil law including minors.

What is missing from the changes that Israel said it has made in its treatment of minors is in the process of arrest and interrogation. These phases are crucial to determining the minor’s fate. Minors are often arrested in the middle of the nights and taken away from their parents and have not access to legal counsel. The minors are surrounded by adults only—al of whom represent the occupying power. The interrogators subject the minors to threats and even violence until they manage to get a confession from them or allegedly incriminating statements against others. The use of violence—verbal or physical is torture. It is against international law. 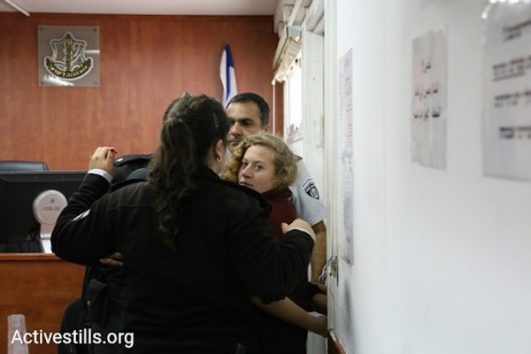 According to B’Tselem’s report, “The new court changed nothing of substance. For one thing, the juvenile court does not hear requests to remand minors in custody, which are heard in the regular courts. Secondly, its function is primarily to sign off on plea bargains already reached between the defense and the prosecution outside the courtroom. This relieves the prosecution from the requirement of presenting evidence to prove the allegations set forth in the indictments.”

One of the testimonies collected by B’Tselem and published in the new report describes what the system looks like from the perspective of a Palestinian teenager:

Abed Sabah, a 15-year-old from the Jalazun refugee camp near Ramallah, was  arrested last August. Soldiers broke into his house at 3:00 a.m. without explaining why. He was handcuffed and blindfolded. According to Abed’s testimony, soldiers beat and cursed him during the drive from his home to the military base. He was detained for several hours overnight at the base, handcuffed and tied to a wooden post outside, forbidden from going to the bathroom. The soldiers took him to a police station in the morning. In the interrogation room, he was questioned about stone-throwing and a pipe bomb. The interrogator permitted him to call his parents but not a lawyer. The interrogator never explained Abed’s rights to him, particularly his right to remain silent.

During this first interrogation, the interrogator pressured Abed to confess to the crimes of which he was accused, saying that it would help him. Abed refused. The interrogator wanted Abed to sign two documents in Hebrew, which Abed did not understand and refused to sign. Abed was then moved to the cell for minors at Ofer Prison, and then to the military court there. The entire ordeal was less than 12 hours — but 12 hours during which he was completely alone. There was no one waiting for him in court either — neither his parents nor a lawyer. Abed said he did not know what the purpose of the hearing was, and when the hearing was over, he was sent back to prison.

Two months later he was brought back to court. A lawyer told him he wanted to sign a deal that would include a sentence of two-and-a-half months — exactly the amount of time Abed had already spent in prison. And so it was. Abed’s parents paid a fine of NIS 2,000, and Abed received another five months of probation. At 7:00 p.m. that night, Abed was informed that he was being released. His brother was waiting for him outside of the prison, but the Israeli authorities instead released him at the Ben Sira checkpoint, where no one waiting. Abed said he used a waiting cab driver’s phone to call his brother, who came and took him home.

One can then see why so many defendants sign plea bargains, having been left with little choice by the military courts’ detention policy to hold minors in custody from the time of their arrest until they finish serving their sentence. Futhermore, according to the report, “Carrying out an evidentiary trial from within prison is fraught with difficulties, and the defendants know that if convicted, they will be sentenced to prison anyway, as no alternatives exist. Even in the extremely unlikely case that they are acquitted, the time they spent in custody throughout the trial may be just as long, or even longer, than the time they will spend in prison under a plea bargain.”

Israel claims to have shortened the length of time minors are held in custody in order to increase judicial review of their detention. This has only driven up the frequency of remand hearings, and not changed the outcomes because the judges almost always remands the minors in custody because the detention of minors is standard procedure in the military court. This is why hundreds of Palestinian minors are imprisoned. According to B’Tselem’s figures from the Israel Prison Service on February 28, there were 356 minors in custody with 95 serving a prison sentence, 257 in pre or post indictment detention, and four being held in administrative detention. It is B’tselem’s contention that the creation of this “false façade of a fair legal system that purports to safeguard the rights of minors tried in its courts serves a political goal: legitimizing the occupation and silencing criticism of it. “

The Military Juvenile Court; its very name an Orwellian nightmare, is formulated by and implemented by Israelis—soldiers, judges, and prosecutors representing the occupying power’s interests. With a conviction rate of 100% the military courts can never by neutral and justice can never be served.

During the question and answer period, B’tselem’s staff made it clear that trying to amend, fix, or changes the military system was futile because Israel has chosen to institute a military court system that excuses itself from international law and human rights including the rights of children. They believe, as do I now, that the façade of a trial with a judge, is just that a façade that covers up the fact that Palestinians are under a 51 year old belligerent military occupation that abuses millions of people daily.

The day after the press release for the report, Ahed Tamimi took a plea deal that allows her to spend 8 months in prison instead of 4 years. She was charged with one assault—the slap of the soldier. The other charges were dropped because there was not enough evidence. Many believe this deal, which is considered light by Israeli standards, was made because of pressure from her celebrity status as an icon of nonviolence. We should celebrate this small victory but need to remember the end goal is about ending the occupation that creates the structural violence and the resistance movement, which is legal and just yet criminalized in the first place. If the occupation didn’t exist or ended, there would be no need for a military judicial system for children. No amount of tweaking or fixing should blind us to this important point.

For further reading:
The full report
The executive summary