As you come to him, the living Stone…you also, like living stones,
are being built into a spiritual house to be a holy priesthood…” (1 Peter 2:4-5 ESV)

I’ve written in the past about my work involving classroom construction projects for a few of the 585 schools of the Lesotho Evangelical Church in Southern Africa (LECSA).  Recently, the LECSA Education Secretary, Mr. Senekal, and I visited Liepeleng (Dee-ay′-pay-leng) Primary School.  Mr. Senekal had heard from the parish pastor that the school at this outstation needed assistance. Our journey took about six hours from Morija, with the last two of those covering thirty miles on a gravel road which eventually became a 4×4 track in places. 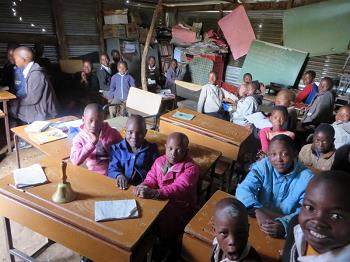 The school was in the old stone church, but after a storm ripped the roof off last year, you can see that it is now in a makeshift building using materials salvaged from the church.  There are three teachers, including the principal, and about 100 students in the seven grades.  At the moment, they have just the one room which is about 15 x 20 feet, though community members are working on adding a second room at the back of the structure.  I’m always impressed by the dedication of the teachers working in such difficult settings.  Usually, the teachers are people from the surrounding area who are used to the harsh conditions of living and working in the mountains.

Also in September, the Africa Executive for Global Ministries, Rev. Marco Cable  visited for several days. During his visit he met with the LECSA leadership, including the Moderator Rev. Simeon Masemene and the Executive Secretary Rev. Nelson Posholi. Rev. Cable saw some of the projects supported by Global Ministries. During his visit to the Theological School he met with the Director Rev. Bernard Mojaki, handed over Greek textbooks and attended chapel with the students and staff. 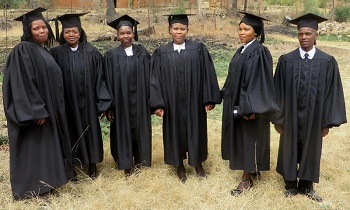 At the end of September, the 2017 graduation ceremony was held at Morija Theological School for six new pastors. They had completed their classes at the end of May and were assigned to vacant parishes at the beginning of August.  The new academic year began in early September and there are 26 students enrolled in the Seminary and eight in the Bible School.

At the end of October, the LECSA held its annual Leeto la Thapelo (Journey of Prayer) weekend event. The end of October also coincides with Reformation Sunday and this year was the 500th anniversary of the Reformation. To mark the occasion, during the weekend there was a special ceremony of signing partnership agreements between the LECSA and sister churches in South Africa of the Reformed tradition. These were the Uniting Presbyterian Church in Southern Africa and the Free State Synod of the Dutch Reformed Church.

The verse from 1 Peter tells us that we are to be “living stones.”  May we be stalwarts in our faith, like those teachers at Liepeleng standing firm amidst the challenges they face.  The verse also tells us that we are part of a “holy priesthood.”  The idea that non-ordained believers are part of this priesthood was a key element of the Reformation.  As Paul puts it, “Now you are the body of Christ, and each one of you is a part of it.” (1 Corinthians 12:27)

Yours in Christ,
Mark Behle