Joseph Kabila, President of the Democratic Republic of the Congo (DRC), is coming to the end of his second, and constitutionally mandated final term. Though elections are scheduled to take place in November, Kabila has made it clear, through delays and obstructions to the electoral process, that he will ignore his constitutional obligation to step down from the presidency. Refusing to peacefully transfer power puts Congo, and Congolese citizens, at high risk of debilitating regional instability and violence.

Active international pressure to promote free and fair elections in the DRC is now vital – and US policy towards Congo is failing. Despite President Kabila’s attempt to stay in power at all costs, and continued looting and violence against the population, the U.S. has not created any consequences for the government’s repression.  On February 16th, youth and democracy activists plan to peacefully demonstrate so that elections can be held on time this year. The Congolese government is gearing up to respond violently to these protests. Last year, the reaction of the Congolese government to similar protests led to at least 43 deaths. 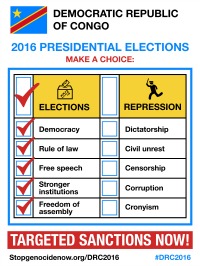 Join the march by posting a photo to the Outcry for Congo Facebook page every day February 8th -12th holding our “Election v. Repression” mock ballot. The photos will send a clear message to Secretary Kerry that by avoiding strong action, he is ensuring that Kabila retains his hold on power and that Congo descends, again, into instability and insecurity. We also encourage people to share the ballot and message on their own social media accounts in order to build momentum throughout the week.

(2) Snap a selfie with the ballot and post it on Outcry for Congo. To make an impact follow these important steps!

(3) Get others involved: Post your selfie on your own social media pages with this sample message: “I voted for ____ [pick something from the ballot] in #DRC2016. Will you @JohnKerry? #DRCSanctions bit.ly/DRCsanctions

Click here to send a letter to Secretary Kerry saying it is time to put pressure on President Kabila to hold free and fair elections in November. There is a risk of violence against democracy activists and inaction is a vote for continued repression in Congo. It’s time to put serious pressure on President Kabila now, by placing members of his inner circle on targeted sanctions lists before it is too late.