Palestine Today and the Kairos ‘Cry for Hope’ Webinar 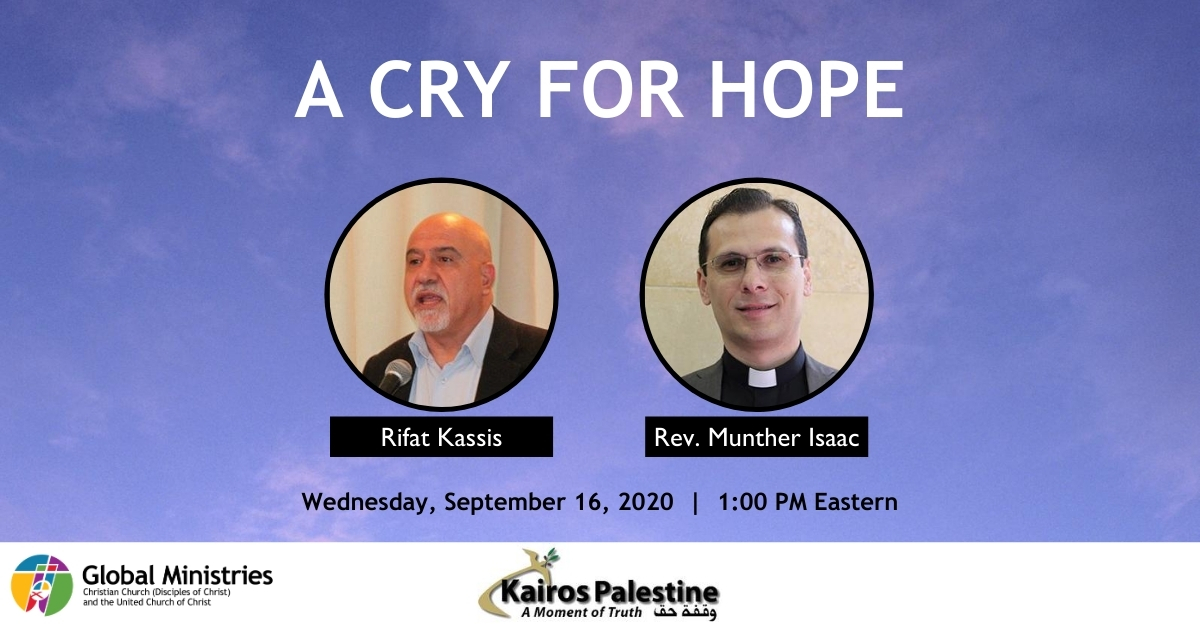 In a time when the COVID-19 pandemic has impacted the globe and as the struggle against historic and systemic injustice and oppression is revived, the circumstances of Palestinians living under occupation continue to worsen. The threat of Israeli annexation of large parts of the West Bank is an example of the decades of policies that have denied Palestinians their basic human and civil rights. Join us on Wednesday, September 16 at 1 PM Eastern US for a special webinar conversation with two Palestinian Christian leaders, Rifat Kassis and the Rev. Munther Isaac, as they discuss the current reality, the situation of Palestinian Christians, and the recently-issued “Cry for Hope,” a letter to the world calling for attention and action to challenge injustice and to seek change to which UCC and Disciples leaders have responded. This webinar is scheduled to take place during the World Council of Churches’ World Week of Peace in Palestine and Israel.

Munther Isaac is a Palestinian Christian pastor and theologian. He currently pastors the Evangelical Lutheran Christmas Church in Bethlehem. He is also the academic dean of Bethlehem Bible College and is the director of the highly acclaimed and influential Christ at the Checkpoint conferences. Munther is passionate about issues related to Palestinian theology. He speaks locally and internationally and has published numerous articles on issues related to the theology of the land, Palestinian Christians and Palestinian theology, holistic mission, and reconciliation. He is the author of The Other Side of the Wall; From Land to Lands, from Eden to the Renewed Earth; An Introduction to Palestinian Theology (in Arabic); and a commentary on the book of Daniel (in Arabic). He is also involved in many reconciliation and interfaith forums. He is a Kairos Palestine board member.

Rifat Kassis has long been active in the Palestinian struggle on a number of non-violent fronts. He was the Executive Director of YMCA Palestine and founder of YMCA/YWCA Joint Advocacy Initiative and the Olive Tree Campaign. He also worked as the Manager of World Council of Churches Ecumenical Accompaniment Program in Palestine and Israel (WCC/EAPPI). He founded Defense for Children International, Palestine (DCI-P) and was elected International President for the international movement for two terms. He is a co-author of the 2009 Kairos Palestine document and the General Coordinator of the Kairos movement since its inception in 2009. He published two books Palestine: A Bleeding Wound in the World’s Conscience and Kairos for Palestine and, in addition, he has contributed to 16 different books in different languages.

Peter Makari has served as Executive for the Middle East and Europe with the Common Global Ministries Board of the United Church of Christ and the Christian Church (Disciples of Christ) since July 1, 2000. He is also the Team Leader for Global Ministries in Cleveland. He serves on the National Council of Churches’ Interreligious Convening Table, of which he is a co-convener, and has been an active participant in national Jewish-Christian and Muslim-Christian dialogue initiatives. An Egyptian-American, Peter has lived in the Middle East, where he worked with the Coptic Evangelical Organization for Social Services (CEOSS) in Cairo, Egypt (1991-1994), and then with the Middle East Council of Churches, based in Limassol, Cyprus (1997-2000). Peter is the author of Conflict and Cooperation: Christian-Muslim Relations in Contemporary Egypt (Syracuse University Press, 2007).

Register for the webinar today!