Afghanistan is a landlocked country, bounded by Tajikistan, Uzbekistan and Turkmenistan to the north, by the Islamic Republic of Iran on the west and by the Islamic Republic of Pakistan on the south and south-east. In the extreme northeast, Afghanistan has a common border with the People’s Republic of China. This nation is home to many different tribal communities. War has been the norm for the Afghan People for over 25 years.

Afghanistan has four major ethnic groups: Pashtoons, Tajiks, Hazaras, and Uzbeks. Numerous other minor ethnic groups (Nuristanis, Baluchis, Turkmens, etc.) also call Afghanistan their home. The majority of Afghans (99%) belong to the Islamic faith, but there are also pockets of Sikhs, Hindus and even some Jews. The official languages of the country are Pashto and Dari (Afghan Persian). The capital of Afghanistan is Kabul, which due to many years of war has been shattered and nearly destroyed. Afghanistan, which is over 5000 years old, is crossed by one of the oldest intercontinental trade routes in the world. The Silk Road which connects Europe and China intersects the route connecting central and southern Asia in Afghanistan. Ethnic diversity has always characterized this territory which includes ancient cities, agricultural villages and nomadic tribal peoples. The major exports of Afghanistan include: opium, fruits and nuts, hand woven carpets, wool, cotton, hides and pelts, and precious and semi-precious gemstones. Internal ethnic conflict and external invasion have occurred throughout its history. The Soviet Union invaded Afghanistan in 1978, but was driven out in 1989. The Taliban emerged in 1994 claiming their goal was to disarm warlords and bring peace to a splintered nation. Once they captured Kabul in 1996, however, they transformed into a tyrannical and reactionary leadership. The Taliban are Islamic fundamentalists and enforced their interpretation of Islam through strict cultural, political and religious control. The Taliban rule in Afghanistan was one of never ending warfare – warfare against the Northern Alliance, Islamic moderates and non-Muslims. Women were not allowed to work outside the home and were required to wear the burka, a head to foot covering, whenever venturing into public.

In March of 2001, the Taliban became disgusted that the International Community proposed to invest millions in the preservation of what remained of Afghanistan’s cultural and religious history, but did not offer to invest a fraction of that cost on the desperate needs of living Afghans. They responded to the proposition by destroying ancient monuments to Buddha including some carved into mountainsides in the 3rd and 5th centuries.

The Taliban’s refusal to cooperate with U.S. efforts to find and destroy the Al Qaeda organization and its leaders after the attack on the World Trade Center and Pentagon (September 11, 2001), led to U.S. invasion in the fall of 2001. The U.S. led invasion removed the Taliban from power and continues in 2004 to hunt for the Al Qaeda forces that are believed to be hiding in the mountainous regions between Afghanistan and Pakistan. There have been substantial civilian casualties – over 3000. Most of these occurred during the first few months of the engagement.

The damages caused by the U.S. military operations in Afghanistan and the fighting between tribal groups rivaling one another for political power are monumental. Physical damage to buildings and infrastructure was severe and is on-going. Violence is commonplace and government leaders, foreign troops and foreign aid workers are frequent targets. Doctors Without Borders, an international aid organization, pulled out of Afghanistan in August, 2004 following the deaths of 5 workers in June and continuing threats.

Refugee populations that were displaced during the U.S. led invasion have largely returned to Afghanistan. Many, however, continue to be jobless and/or homeless. Land mines and cluster bombs prevent many from returning to their rural homes, and so cities are crowded with these internally displaced persons. Many thousands of the refugees are war widows (often unskilled) and their children. Cities are ill equipped to provide services for the large numbers of people that have migrated to them in hopes of finding safety and employment.

In 2003, a new constitution was adopted and Mr. Hamid Karzai was elected interim chairman of the governing council. Regional, ethnic and tribal disputes and distrust continue to challenge the new government. Presidential elections were to be held in June of 2004, but security concerns of voters, candidates and international groups led to the postponement of elections until October 9, 2004. 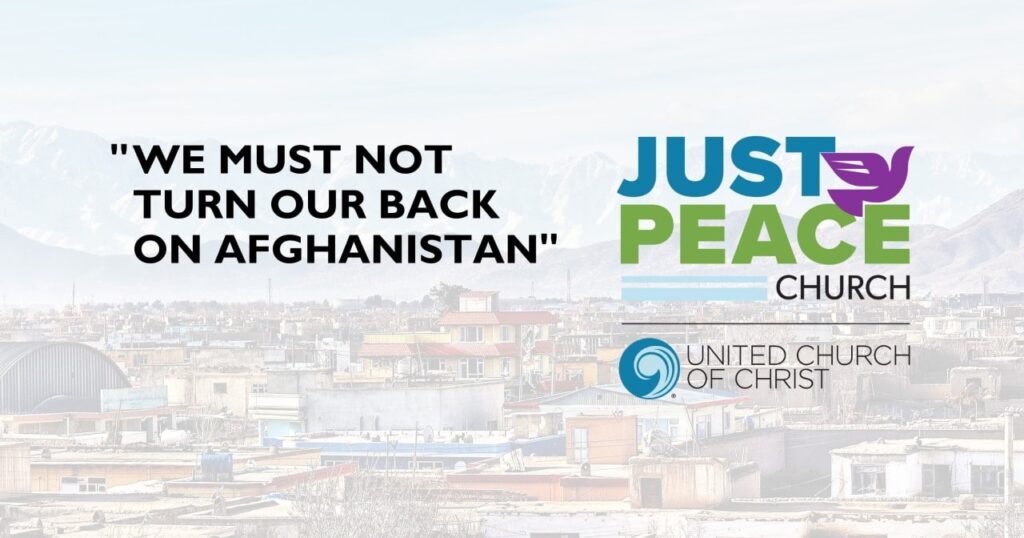 We must not turn our back on Afghanistan

UCC Officers statement on Afghanistan “As he came near and saw the city, Jesus wept over it,...

Churches in Europe have a crucial role to play in responding to the arrival of refugees in Europe,...

Over many years, the National Council of Churches has often expressed our aspirations and sorrows,...

Quotations about the Ubuntu concept “One of the sayings in our country is Ubuntu – the...

From January through December 2012 the children of Immanuel United Church of Christ in Needville,...

The members of First Christian Church in Edmond, Oklahoma, hosted an Alternative Gift Market in...

South Side Christian Church in Kokomo, Indiana, began a Capital Campaign to pay for a new heating...