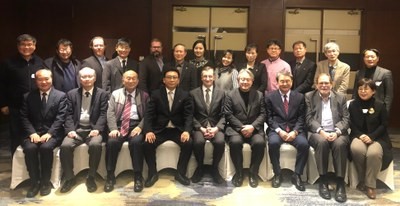 “The Shenyang meeting was a precious opportunity to renew our exchange and cooperation with our fellow Christian sisters and brothers from North Korea,” said Peter Prove, WCC director for international affairs. “It also gave us an occasion to reflect together on current difficulties and obstacles in the path to peaceful coexistence in the region, and to explore ways in which we can help keep alive the vision of peace.”

The agenda for the meeting in Shenyang included revision of the EFK Terms of Reference, and planning for activities in 2020 – particularly marking the 70th anniversary of the start of the Korean War. Participants discussed how to use next year’s commemorations as an opportunity for increased advocacy for formally bringing a long-overdue end to this tragic conflict which has marked the history of the region and the lives of so many people.

“In Shenyang we shared concerns regarding actions contrary to the commitments made in the Panmunjom and Singapore Summits, which have undermined progress towards peace and have instead reflected the continuation of previous policies of hostility and confrontation,” said Prove, “including military exercises and the ‘maximum pressure’ sanctions regime.”

The EFK Steering Committee meeting follows an EFK Forum meeting in Bangkok in July, which focused especially on the impact of the sanctions against North Korea on diaconal cooperation, on possibilities for people-to-people encounter and dialogue, and on the political environment for progress for peace.

Participants in the Shenyang meeting reaffirmed their support for inter-Korean leadership for peace, and for actions in line with commitments made especially in the Panmunjom Inter-Korean Summit Declaration, and a step-by-step approach to building trust and an environment for sustainable peace. In particular, they supported calls for suspension of all provocative military exercises in the region, and relaxation of the unprecedentedly stringent sanctions regime. They renewed their shared commitment to continuing to working together for peace in the region, for encounter and dialogue rather than military confrontation and conflict, and to increased advocacy and action for a formal end to the Korean War and progress towards a peace treaty.