I have completed four years at Kwansei Gakuin University (KG) in Kobe. It’s a rather large institution (23,000 students) established by Methodist missionaries in 1889. I had two roles. First, I was chaplain of the Center for Religious Activities where I coordinated programs with other chaplains; events, lectures, worship services, work camps, Christmas events, newsletters, and various other programs that help to enrich the learning environment for the students, and at the same time educate about the Christian values and identity that make KG such a special school. My second role was as associate professor of the School of Theology. I taught several classes, and contributed to the various programs being held within the department. KG also is committed to issues of human rights. The annual Rainbow Week is a chance to educate the student body regarding some of the issues facing the LGBTQ community. It is a time to celebrate the diversity of the human family present on campus. Human rights education is another strength of KG. There are many classes available to students to learn firsthand about the struggles that minorities face in society. In April, my assignment will change to serve at J.F. Oberlin University in Tokyo – named after Oberlin College in the state of Ohio. I will be serving as chaplain on their new campus in downtown Tokyo – an area known as the tenderloin district of Tokyo.

One highlight of the past year for me was to visit the town of Minamata on the southern island of Kyushu. For some of you, it might ring a bell as the place where local residents suffered from mercury poisoning. The Minamata disease became world famous after the first case was officially confirmed in 1956. The first signs were when the cats started acting strange and then died. Soon, children were born with deformities, and adults experienced intense shaking, pain, and spasms, as well as respiratory problems. It was suspected that the local Chiso factory was responsible for the mercury found in the bay. Fishermen stood up to sue the Chiso company, but it took more than forty years for the case to finally be concluded. Chiso had strong ties to the Japanese government. It had been the main supplier of a special kind of chemical that enabled Japan’s steel production during the war.

The reason for my interest in Minamata is because there are many similarities with what is going on in Fukushima today. I wanted to meet some of the local residents to see how they faced the hard reality of the Minamata disease. I met a local activist who took us to see places where the poisonous sludge was buried. We went to a park to see how the dead are memorialized. Part of the bay was also filled in to beautify the town. And in order to repair the negative image of the town, I learned that Minamata has invested in the recycling and reuse enterprise. I also met with a retired civil servant of the town hall who committed himself to building reconciliation and resilience within the community. My last visit was to see Mr. Sugimoto, a fisherman whose parents (deceased now, but the original mercury poison victims) were the first brave ones to sue Chiso and the Japanese government. 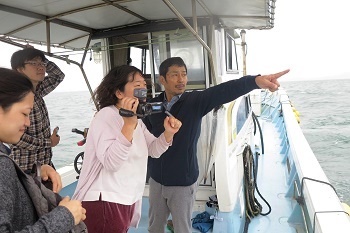 Mr. Sugimoto took me out on his fishing boat to show me the Minamata Bay. I realized that he knew each nook and cranny of the bay. This was his playground from youth. He had so many family memories – more than he could share. As a young man he had left his hometown vowing to never return. But when in his forties he decided to return to join his parents in the fishing business. I asked him, “How did you and your parents manage to live through the disaster – even when society was not lending an ear to your suffering, and the community was so deeply divided?” His answer was “laughter.” He told me that they discovered the sustaining power of laughter. Besides his fishing business, Mr. Sugimoto is active as a comedian, and much loved by the local people. He also serves as a Kataribe (a local witness with special training who speaks to visitors about the Minamata experience and how local residents are finding the power to overcome their adversity).

I came away with a strong sense of how God’s healing presence had been with them in hard times, and how they found tools for resilience right their within their community.