Samaritans on the Route of the Migrants

The following is a reflection from Dr. Paolo Naso. He is a member of the Waldensian Church, a partner of Global Ministries and director of Mediterranean Hope Refugees and Migrants Program of the Federation of Protestant churches in Italy, also a partner.

Dr. Naso is spending his sabbatical as a mission co-worker in residence, spending time at United Theological Seminary with his wife Angela researching, lecturing, and itinerating around the United States with Disciple and UCC churches and church-related agencies.

The art in this piece is from Francesco Piobbichi, who also works at Mediterranean Hope. He started drawing as anti-stress therapy for his humanitarian work in Lampedusa (Sicily), Lebanon, Morocco and on the ship Open Arms.

“A man was going down from Jerusalem to Jericho when he was attacked by robbers. They stripped him of his clothes, beat him and went away, leaving him half dead. A priest happened to be going down the same road, and when he saw the man, he passed by on the other side. So too, a Levite, when he came to the place and saw him, passed by on the other side. But a Samaritan, as he traveled, came where the man was; and when he saw him, he took pity on him. He went to him and bandaged his wounds, pouring on oil and wine. Then he put the man on his donkey, brought him to an inn and took care of him.” Luke 10: 30-34

A couple of years ago, a group of 300 people were trapped in the so-called refugee camps in Libya, exploited to physical and moral violence. They were Syrians, but also Eritreans, Malians, from Ivory Coast and many other countries devasted and crucified by wars, ethnic conflicts, desertification, religious violence.

Some traffickers arrived and proposed a trip to Europe for about 2,000 dollars. An incredibly high amount of money for them. You don’t have the money? No problem you can get it. You can work as a slave; you can prostitute, you can call your relatives saying that if they don’t send money, we are going to kill you. 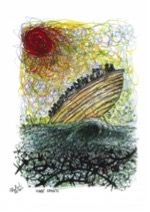 In one way or another the money arrived and two years later, the 300 refugees could be embarked on old, fragile and overloaded boats, and left the Libyan shores. As planned by the traffickers, a few hours later the boats stopped, and the traffickers left them jumping on fast tenders back to Lybia, and the 300 people started sinking on their boats.

Among them were children and women. A couple of hours later they were half dead. The sea was like barbed wire, dividing and separating the safe North from the unsecured Global South – life from death. A fishing boat happened to pass nearby, but when the crew saw the people in danger, they passed on the other side. “We have our work to finish. A military ship will arrive soon to rescue you,” they yelled. Then a

Navy ship arrived, but when it came to the place where the boats were sinking the captain wasn’t allowed to rescue anybody because the incident was assigned to the Libyan Coast guard. “It isn’t our duty. Now the Libyans will come to rescue you,” the captain yelled from the ship. But the Libyans didn’t arrive.

Then the ship of a Non-Governmental Organization arrived where the people were. Its name was Open Arms. Open Arms. And as soon as the young crew saw the migrants, they immediately started to rescue them.

With their red t-shirts, they went to them and bandaged their wounds, pouring on oil and creams.

A couple of days before Christmas, they accommodated the refugees on the deck of the ship, they fed the hungry children, gave water to the thirsty people, shared blankets, and asked for a safe harbor to dock with the refugees. The harbor was 7 days of navigation away, but finally, at the beginning of the new year, they arrived in Spain. Safe and rescued.

This isn’t a parable. It’s a true story of what is happening in the Mediterranean. And while I’m sharing this story, other migrants are living the same Odyssey. Or we should say the same Exodus.

“Our harbors are closed,” the Italian Government declares. “We have too many migrants.”

“We cannot be the refugee camp of Europe,” Greece says, and so those harbors are closed too.

“We are a little country, and we cannot take care of the migrants.” Malta remarks.

And similar arguments arrive from France, Spain, the Netherlands.

Now, my question: In front of this picture, where is our place? Where are we?

For sure we aren’t with the traffickers. They are criminals; we aren’t.

We aren’t on the military ships. We aren’t military. Of course, we aren’t with the Libyan coast guards because we aren’t Libyan.

There are only two places for us to be. We can be at home, safe and protected, even praying in our churches for the life of the migrants. But that doesn’t make us different from those who saw and passed by on the other side. That isn’t what the Samaritan did. He didn’t go to a temple to pray. He acted.

We have another option.

We can stay on the ship of an NGO, with these wonderful and energetic people who decided to do something practical. People who challenged the governments and their public opinions by doing what their conscience dictated them to do.

They may be insulted or even accused of facilitating illegal immigration. But they are returning life and hope to lifeless and hopeless people.

This is where my church, the Waldensian church, stands today. Of course, we aren’t all sailing the Mediterranean, but as a church, we support these actions, we invite our youth to volunteer, we raise money for this cause, we accept the insults, and even being criminalized for what we do. Why are we doing this? The answer is in the deepest root of Jesus’ teaching:

Blessed are those who are persecuted because of righteousness, for theirs is the kingdom of heaven. “Blessed are you when people insult you, persecute you, and falsely say all kinds of evil against you because of me.  Matthew 5: 9-11

There are easier and more comfortable places to stay, but sometimes the Gospel pushes us in unexpected and even unwanted corners. Even on a little ship in the Mediterranean, we are called to open our arms and our hearts.